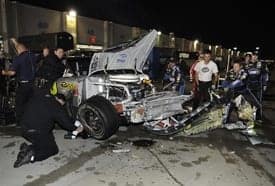 There is still one week left in the season, but after 35 races, it’s not too early to look back on some of the noteworthy stories from the year. As is always the case, there are surprise occurrences, and 2011 was no exception. However, there are three items that will get labeled as a “surprise” when in reality we should have seen it coming. So let’s get right into it: the top three surprises of 2011 that really weren’t.

I remember prior to the start of last season, Keselowski was one of my picks to make the Chase in his first full year. Obviously, I couldn’t have been more wrong as he had more DNF’s (5) than top-10 finishes (2) and a disappointing 25th place in the final point standings. A season like that prevented him from making anyone’s preseason list as a Chase contender for 2011. Yet here we are, with one race left in the season, and Keselowski has shocked everyone with three victories and a current spot of fourth in the standings. It is one of the biggest storylines this year, but is it really all that stunning? For starters, it’s easy to see that the second-year Penske driver has talent. Going back to his days in the Truck Series, Keselowski has made every team he has been with better by the time he left. JR Motorsports, Dale Earnhardt Jr.’s Nationwide program, was a middle-of-the-pack group prior to Keselowski’s arrival; by the time he left after the 2009 season, the team had become a championship contender and weekly frontrunner. He gave Roger Penske his first NASCAR championship of any sort last year in a startup Nationwide program. He gave James Finch, a man who has been in the sport for 20 years, his first and only Sprint Cup win as a car owner in 2009.

Then, you can look back at the offseason changes Penske made in an effort to boost his Cup program for 2011. Paul Wolfe, Keselowski’s crew chief from the championship Nationwide team in 2010, came up to join his driver on Sundays, replacing Jay Guy, who never seemed to be a good fit for Keselowski. While the year started off slow for the Wolfe-Keselowski tandem, things picked up in the summer: the duo won three times and rallied right into the Chase. It was one of the biggest midseason turnarounds in NASCAR history, and Keselowski is finally becoming the driver we expected him to be two-three years ago.

No big surprise there.

Jimmie Johnson will not be racing for a championship this weekend at Homestead… but should we really be surprised?

Because it had to happen eventually, right? That would be Johnson taking the easy way out, although that is one, quick way of looking at it. After winning the Sprint Cup for the past five years, it is hard not to pick Johnson to win the title. In fact, it has become expected of Johnson and the No. 48 crew to leave Homestead as the champions. Once the checkered flag flew this past Sunday at Phoenix International Raceway, Johnson had been mathematically eliminated from title contention, ending his historical run at the top. It had been in the making for weeks, after his self-inflicted error at Charlotte last month put him in a hole that proved to be too much to overcome. The way in which he performed in this year’s Chase was certainly shocking. Not only did he crash out at Charlotte, but there were several un-Johnson like runs at New Hampshire, Texas, and Phoenix where he finished outside the top 10 and led only a total of two laps.

It is the first 26 races where we should have realized that Johnson’s title reign was in jeopardy, though. He did have a very strong “regular season,” with 11-top 5s and 20 top-10s, and never once finished outside the top 10 in consecutive races. But during his championship runs, Johnson has always saved his best for last, and usually always endured a midseason slump of sorts. This year, he was very strong week in and week out up until the Chase, but no one seemed to realize it because of his win count. Johnson’s lone victory at Talladega was the fewest he has ever had in the first 26 races, and despite maintaining a strong level of consistency, the low count in the win column masked most of the strength he had shown. Everyone expected Johnson to pick it up in the final ten races, but he couldn’t have really done much better than what he did in the previous 26 weeks. During a time where Johnson typically “strokes it,” using the regular season as a test session it turns out this time around the No. 48 car was giving us everything they had every week. And when other teams turned it on come Chase time, it wasn’t enough.

With Kasey Kahne’s win at Phoenix this past Sunday, he became the 18th different winner this year, just one short of the all-time record. Considering there are only about 30-35 cars that run every race the whole distance, that is a staggering percentage, especially in today’s NASCAR where it is all about the powerhouse teams who can bully the smaller teams around by outspending them. Instead, this season has produced five first-time winners, two victories by single-car operations (there was only one from 2004-2010), and eight drivers who snapped winless streaks of 30 races or longer. If anyone had predicted in January we would see these kind of numbers, they would never be taken seriously again.

Looking back on everything that has happened these last nine months, it’s easier to make sense of why there has been so much more parity. The new style of restrictor plate racing at Talladega and Daytona made it even more of a crapshoot than in years past, as Trevor Bayne showed by stunning the world in scoring the win at the Daytona 500. Two of the remaining three restrictor plate events saw David Ragan pick up his first career victory and helped Clint Bowyer snap his year-long winless drought by taking the checkered flag at Talladega this Fall. It wasn’t just the restrictor plate races that accounted for more unexpected winners, however. NASCAR’s offseason overhaul of the points system – giving the two drivers 11th through 20th in the points with the most wins the final two spots in the Chase – promoted more risk-taking by the crew chiefs and drivers. It is likely what motivated the teams of Keselowski and Paul Menard to stretch their fuel mileage for the upset at Kansas and Indy, respectively.

Then there is that dreaded word, track position. With Goodyear bringing one of their most durable tires ever to the tracks, it was easier for teams to take only two tires as opposed to four during pit stops. Clean air has proven to be far more valuable than fresh rubber while sometimes, staying out altogether instead of getting any tires proved to be the better decision. It’s what allowed Regan Smith to go to Victory Lane for the very first time, when he was able to hold off Carl Edwards and his fresher tires at Darlington, of all places. No falloff in tires means the competition is greater than it ever has been before, although no one could have predicted this much parity. Then again, with all the new, critical factors it takes to win, we now know to expect the unexpected.

Clearly, 2011 has been one of the most unpredictable seasons ever, and that is a great thing. It has been a fun ride, and hopefully Homestead can end it on an ever higher note. Maybe it has one more “expected surprise” in store for us.