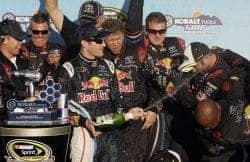 *1. Who is the championship favorite, Carl Edwards or Tony Stewart?*

Just like last week, three points separate the top two drivers in the Sprint Cup Series. The only difference is now it’s time for the season finale. Edwards currently has the points lead, but he has not been able to shake off a hard-charging Tony Stewart. Meanwhile, it’s been obvious that “Smoke” has been the most dominant driver off the fall, with four wins along the way in nine Chase races. He very well could have had a fifth win last Sunday at Texas had his team made the right adjustments to the car down the stretch; Stewart eventually came home a strong third, right behind Edwards.

Edwards has been playing the consistency game and, so far in the Chase, it has played into his hands. But the driver of the No. 99 Aflac Ford Fusion is going to have to kick it up a notch if he wants to win his first championship. Even finishing second might not be good enough, given the way Stewart has racked up the wins in recent weeks. But the Columbia, Missouri native won last year at Homestead and there’s no better time to get his second win of the 2011 Sprint Cup season. In doing so, Cousin Carl would become the first series champion to also win the season finale since Jeff Gordon in 1997.

As for the actual advantage, it goes to Edwards, if only because of his win at Homestead last year.

*2. Will Team Red Bull still be in business after Sunday?*

Team Red Bull was all smiles after this past Sunday. Black Monday will likely tell a very different story for one of Toyota’s original NASCAR operations.

After Sunday’s race, most teams are going to spend the off-season gearing up for the 2012 season. The staff of Team Red Bull, on the other hand, are likely to be looking for work elsewhere if potential investors do not come forward in the next few days. While Kasey Kahne’s win at Phoenix was a great morale-booster for that organization’s hard work and dedicated efforts, it’s not a guarantee that the team will even be around in 2012.

While Jay Frye is working around-the-clock to line up potential investors to keep his team afloat, this scenario is eerily reminiscent of the uncertain future of Richard Petty Motorsports this time last year until that organization got an eleventh hour reprieve in the form of financial investors. But the big difference is right now Team Red Bull, for all its valuable assets and potential, still has yet to find a knight in shining armor to save the day. Richard Petty Motorsports had a name to the face of their savior; for Red Bull, the investors needed to keep this team running come Daytona have yet to show a face.

This time it’s Brad Keselowski. The driver who’s become well known for being outspoken even in his brief time in stardom was busted for $25,000 by NASCAR after tweeting rather bluntly that he felt NASCAR’s much ballyhooed move to electronic fuel injection for 2012 is nothing more than another unnecessary expense being passed onto race teams. That may not be that big a deal for Penske Racing and Keselowski’s fully funded Cup ride, but let’s not forget the young driver is also a first-year Truck owner. There’s no doubt he’s learned this season just how expensive fielding a race team is.

The secret fines are hardly surprising; Ryan Newman and Denny Hamlin have both had their pocketbooks dinged by the sanctioning body for refusing to toe the company line. Keselowski is cut from very much the same cloth when it comes to making his opinion known. There’s few, if any, race fans out there that wouldn’t immediately think of Brad when asked which driver got fined this week.

This episode says a lot more about the sanctioning body than it does the driver. And what it seems to say is twofold. For one, NASCAR’s proving to be every bit as touchy-feely as they’ve ever been. After all, the sanctioning body is scarcely two weeks removed from having benched Kyle Busch for wrecking Ron Hornaday at Texas…despite the fact that the driver dubbed Rowdy has done plenty of wrecking for no reason at all throughout the past few seasons. This benching wasn’t an example of consistency or enforcing rules; it was an example of France and Co. catering to populist rage.

Here, all an owner does is point out the obvious; that going to fuel injection is going to cost the teams valuable development money without adding much of anything to the on-track product and performance of NASCAR racing, and he gets slapped for it. Disconcerting? Considering NASCAR is both counting on these car owners to stay resourceful enough to stay in business and to find testing solutions to more pressing on-track issues (like say, finding a drafting package that won’t leave the Daytona 500 a sparsely-attended embarrassment), slapping wrists for calling a spade a spade is hardly productive behavior.

Just another day in Franceland.

*4. Will anyone ever equal the half-decade of domination by Jimmie Johnson again?*

Jimmie Johnson’s historic championship run will officially come to an end this Sunday at Homestead and a new champion will be crowned for the first time since 2006. But Johnson leaves some pretty big shoes to fill for the next Sprint Cup champion. Love or hate him, what the El Cajon, California native accomplished in the last five years was nothing short of amazing. It was just as historic as New York Yankees great Joe DiMaggio’s legendary 56-game hitting streak or the 1972 Miami Dolphins’ unblemished NFL record.

This begs the question…will stock car racing ever see another run of greatness like this ever again? In all honesty, it’ll be very surprising if we as NASCAR fans ever bear witness to anything this historic for at least another generation. To win two consecutive championships is one thing, but to win five in a row? That, dear readers, is simply amazing…Chase or no Chase.