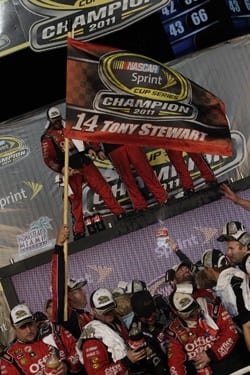 I was going to write a totally different column this week. I’d planned to do an end of year awards piece, but after Sunday’s Herculean tussle between Tony Stewart and Carl Edwards, it just doesn’t seem right.

To be honest, given this will be my final weekly column of my fourth full year writing for this great site (unashamed bias there), I’d written quite a bit of the column already. Here are, for the record, some of my categories:

*Biggest Surprise:* Trevor Bayne winning the Great American Race in the fabled Wood Brothers No. 21 Ford
*Funniest Moment:* “Kevin Harvick trying to beat up Kyle Busch (who was still sat in his car) at the Lady in Black, in Darlington, SC”:http://www.youtube.com/watch?v=eYh7BhiDYxY
*Best Ad:* “The M&M’s spot”:http://www.youtube.com/watch?v=QJV487KmR_4 when they tape Kyle Busch’s mouth shut, steal his car, and tie him up. Kudos to the creative team at the ad agency for selling this not just to the client but also to Busch’s management team.

New to NASCAR? Just watch a rerun of the final showdown of 2011, and you’ll be a fan for life.

But as I sit down to write this column, with the throaty roar of 43 engines now silenced until Daytona testing in the New Year, I just don’t have it in me to go that route. Instead, I feel compelled to write a little about Sunday.

As a transplanted Englishman living in New York City, I’m proud to say I just celebrated my tenth year which I believe makes me a proper New Yorker. You wouldn’t believe (actually, you probably would) how many times people are astonished to find out I write a column on NASCAR. It’s the same confused, bemused look each time.

Inevitably the next question is something along the lines of, “Why on earth do you like NASCAR? Are you completely insane? Do you really watch every Sunday? Isn’t it just ugly cars turning left in a hurry?”

Sometimes, I try to win them round; sometimes I don’t. Now, though, bringing them over to the dark side will be easy. I’ll just point the skeptics, however vociferous their criticisms, toward what happened at Homestead-Miami this past weekend.

Because that, ladies and gentlemen, was a Game Seven walk off, pinch hit, grand slam home run sort of race. A last minute come from behind, Super Bowl-winning, full length of the field, fourth quarter drive kind of a championship decider. It was a race, if truth be told, that if you watched and didn’t enjoy, you should never bother yourself with any form of motorsports again.

Such was the race — and for more on the details, I highly recommend you read “Matt’s McLaughlin’s phenomenal race recap”:https://frontstretch.com/mmclaughlin/36553/ –- I found myself unable to sit down for much of the last fifty laps. And by that, I mean I found myself physically unable to sit. Instead, I paced and bit my nails – absolutely riveted to each and every lap.

Sunday’s Ford 400 really was one of those races we’ll still talk about in fifty years time. Never before have two drivers finished level on points – Stewart’s five wins trumped Edwards’s solo victory at Las Vegas for the tie-breaker – and never before has there been such a late season charge as we saw from Tony Stewart: a driver who himself didn’t rate good enough to even merit a Chase place ten races ago.

Stewart, the last man to win the title before the half decade reign of King Jimmie began, had to face adversity from the earliest point of the race. How he avoided any serious damage to his car, after hitting debris from Kurt Busch’s stricken motor which punched a fist size hole in his radiator grill, just 17 laps in, is just part of the story. Smoke had to race from the back of the field not once, but twice and then lost the lead (and nine further spots) with a botched pit stop – a lug nut hang, necessitating a two tire rather than the planned four tire spot. Stewart, to all intents and purposes, literally willed his No. 14 car to the race victory and a glorious third Championship despite the absolute best efforts of Carl Edwards.

“I feel like I passed half the state of Florida — 118 cars is a lot of cars to pass in one race. To do it under the circumstances and pressure we had, I’m very, very proud of that,” said Stewart. “I can’t even remember how many races I’ve won, but I would have to say under this set of circumstances I’ve got to believe [this is] one of the greatest races of my career.”

A.J Foyt, who made the No. 14 famous, is not just Stewart’s boyhood idol but now also a close friend and confidante of the owner driver. Said A.J. on Tony’s triumph, “I think Tony drove the best race of his life.” And that from a man who knew a thing or two about driving – a true giant of any format of motorsports you care to name.

The only thing that might take some explaining is — as my friend and fellow Frontstretch writer Vito Pugliese wryly noted, “It’s kind of cool the chubbiest guy in motorsports beat the guy on the cover of Muscle & Fitness for the Sprint Cup.” And whilst we’re on the subject of Carl, I just want to say that was a supremely graceful acceptance of defeat: a true example of good sportsmanship.

Over the course of 36 races, Edwards was the most consistent racer and he can rightly lay claim to the title of best driver in 2011 regardless of whose name is on the big wavy silver trophy. Respect to Edwards. He, like Johnson and others will be back next year, but for now, it’s congratulations to Tony Stewart on a monumental victory and an easy answer, for me at least, to why I love NASCAR.

—
*Two quick points* before the Yellow Stripe goes into its annual winter hibernation:

First up, it was certainly strange to see the five-time champion Jimmie Johnson have such a poor outing – finishing 32nd, six laps down – at a track at which he’s seen such unprecedented success. Double J’s five straight championships, whatever the format, speaks to a level of consistent brilliance that has few parallels in the 64 years of our great sport of NASCAR. 2012 brings with it a bunch of unknowns, but there’s one thing I’m absolutely sure of: Johnson will be back and back hungry for a sixth title and Chad Knaus is a long way into planning just how.

And finally, I want to take a minute to say a massive and heartfelt thank you to everyone who has read, and commented, on my columns this season. I truly appreciate it, even those folks who tell me, in no uncertain terms, that I suck. (I do. It’s OK, happens to the best of us.) Writing a weekly piece is not a privilege I take lightly, and I look forward to being back next year, refreshed and ready to go.

Happy Thanksgiving, all and see you in Daytona, God willing.