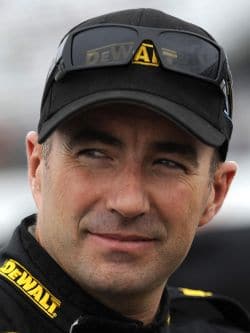 *2011 Team Ranking:* No. 2 at Richard Petty Motorsports. While Ambrose scored a victory, the first of his career it was teammate A.J. Allmendinger who finished higher in points (15th).

*High Point*: Without a doubt the standout moment for Ambrose in 2011 was the win at Watkins Glen in August. Ambrose had come oh so close to winning on the road courses at both Infineon and Watkins Glen every year but came up short, including an absolutely painful near miss at Infineon in 2010 when he stalled the car under caution in the closing laps. Expectations were high at Infineon once again but it was the first race for Ambrose and his new team on a road course and there were some growing pains. They got everything in line for the next shot at the Glen and after having to wait an extra day due to a rainout, he finally closed the deal and got that first Sprint Cup Series victory.

*Low Point:* The fall race at Richmond was the low point. A summer slump for the 9 looked like it might derail a promising shot at making the Chase but thanks to the win and a turn around in performance, Ambrose found himself with a shot heading into Richmond. Unfortunately everything that could go wrong did. Ambrose got caught up in an early incident between other drivers. The team fixed the damage and attempted to make their way back through the field but Ambrose got loose and made contact with his own teammate A.J. Allmendinger and Brian Vickers. Vickers took exception and wrecked Ambrose later, effectively ending any shot he may have had to put himself in position for a wild card spot.

*Summary:* Ambrose made what may have been a risky move for 2011, leaving JTG Daugherty Racing for financially questionable Richard Petty Motorsports. It really was in doubt for awhile if the team could even continue and what kind of resources they would have. In the end, RPM sorted out the financial issues and Ambrose made the right move, putting himself in a better situation on the racetrack.

For Ambrose, the move to RPM was also going to answer some questions about whether or not he belonged in the Sprint Cup Series as the No. 9 car was a contender with former driver Kasey Kahne. A win and a solid points finish in his first season with the team should give him the answer he was hoping for. By the end of the year, seeing Ambrose and the No. 9 car at the front of the pack was not an unusual sight. Better yet, he was up front at not just road courses but short tracks and intermediates as well.

RPM is still not in the same tier as top teams like Roush Fenway or Hendrick Motorsports, but the No. 9 car isn’t a backmarker, either, a position Ambrose found himself in on more occasions than he cared for in previous seasons.

*Off-Track News:* Ambrose branched out into ownership in 2011, starting Marcos Ambrose Motorsports. The team campaigned late models with Australian George Miedecke in the UARA series. Miedecke finished second in series points and won Rookie of the Year honors. The team will return in 2012 with new driver Ben Rhodes, a young up-and-coming driver from Kentucky.

*2012 Outlook:* Ambrose will return with the No. 9 car and crew chief Todd Parrott in 2012. The team spent 2011 learning each other and along the way found some tracks where team and driver performed well and others where they needed more work. The plan is to return intact for 2012 and improve. A year removed from the financial issues at RPM, there is no drama unfolding to distract preparations for 2012. The ultimate goal, of course, is to make the Chase.

*2010 Frontstretch.com Grade*: C-.
*2011 Grade*: B. Ambrose made it into the top 20 in points, finishing seven spots better than he did in 2010, and finally broke through for that first win. He also showed strength on a variety of different tracks, a good omen for the future.