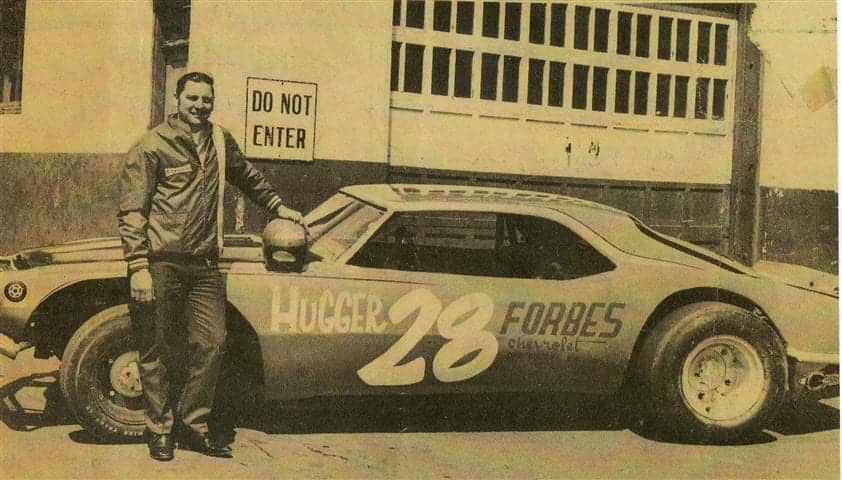 Jim Hallahan raced from 1949 until 1982.
Photo from Jim and Liz Hallahan

Sometimes referred to as a living legend, Jim Hallahan has been around stock car racing for a staggering eight decades. His interest in cars started at a very young age. “All I ever did was work on them, drive them and sell them. That’s been my whole life.” He started racing jalopy stock cars in Streetsville, Ontario in 1949 at age 20. Five years later he moved up to the Late Model division and would race until 1982 when he called it a career. Along the way he raced at tracks all over Ontario including the CNE, Pinecrest, Flamboro and Nilestown. He took the Points championship at Pinecrest Speedway in 1958 (Modified) and 1965 (Late Model) and won many features and International race events in Ontario, River Glade N.B., Bathurst N.B., Fredericton N.B. and at Riverside Speedway near Antigonish, N.S. The highlight was the 1959 Pinecrest International. “They had the Americans come up, guys from all over, it was a big thrill and probably the biggest one I ever won in Ontario.” Jim often joined an exclusive group of racers from Ontario that toured the Maritimes back in the 1960′s. Other well known racers included Doug Warnes and Don Biederman. Back in the Day, many would remember Jim behind the wheel of the #28 and later the bright orange #33Forbes Dartmouth sponsored car “The Hugger.”

Jim Hallahan loved to race and almost lost his life in a race accident in 1970.
Photo from Jim and Liz Hallahan

In 1969, Ivan Forbes offered Jim a job and an opportunity to drive a stock car for Forbes Chev Olds in Dartmouth. He took the job and sold cars for 25 years. But Jim’s run almost met a tragic end August 30, 1970. Hallahan was competing in the Halifax-Dartmouth International. On just the second lap, Jim was barreling down the back chute at over 80 mph. Heading into turn three, Hallahan sharply veered towards the infield and in a half moon arch spun and shot towards the outer guard rail. Popular Dartmouth driver Linwood Giberson, who was heading down the back stretch as well, unavoidably smashed into the rear of Jim’s car with a resounding explosion. Within seconds a forty foot fireball engulfed the car and the track for 30 feet around. All the other cars stopped, drivers jumped out, fire extinguishers in hand to help save Jim. There was no sign of Hallahan until suddenly a shape staggered from the passenger side of the car and collapsed onto the track. He was rushed to VG Hospital in Halifax. Amazingly, his injuries included first degree burns to the left side of his face, singed eyebrows and a bruised and “wrenched” shoulder. His biggest concern was whether any other drivers were injured. The cause of the accident was thought to be a broken rear axle. He also had problems releasing his seat belt. Most felt his vast experience and coolness under pressure saved his life. A less experienced driver may have panicked and died in the inferno. The gas tank was ripped clear off the car, this too may have saved his life. If the tank was punctured and still attached to the car, things may have been much different. As a side note, when the race resumed the eventual winner of the race was none other than, Junior Hanley.

Jim knew when it was time to retire. “I got into a 200 lapper up in Truro and I could feel it. I said to myself that this is it. That was my last race.” Upon retirement from racing and with the cooperation of other promoters and car owners, Hallahan was instrumental in the creation of the Maritime touring stock car series better known as MASCAR. He served as President for almost 15 years and is entering his twelfth year working at Scotia Speedworld where he has worked as Assistant Manager among other duties as well as Coordinator of the Carquest Maritime Pro Stock Tour. A terrific promoter, Jim said he always wants to put on a super show and have a super crowd. If the show isn’t good he didn’t have a good feeling and if the crowd wasn’t there, something was wrong and he knew he had to fix it. “I want to be remembered in the business for giving the race fan an honest show for their dollar.” In the late 1980′s he negotiated for the MASCAR touring series to race through the streets of Halifax during the Moosehead Grand Prix weekends, raising awareness of the Maritime tour even more. After his retirement he was there to help get his son Jim Jr. and daughter Debbie into racing. Jim almost got out of racing for good in 1984 when Debbie was racing at the Riverside track in Antigonish and crashed. “We knew it was serious when it happened and we stayed in the hospital with her and she died during the night. I’ll tell you it really took a lot out of us.” Debbie was honored in 2009 by being inducted to the Maritime Sports Hall of Fame. Jim tried many times to get out of racing, but the thrill and his love for racing keeps bringing him back. In 2003, The Canadian Motorsport Hall of Fame inducted Jim into the Hall. “After 53 years, this is the biggest thing that’s ever happened in my racing career. It’s a tremendous honor for me and my family.” Jim was also inducted into the Maritime Sports Hall of Fame in 2010.

Jim Hallahan does extensive work for many charities.
Photo from Jim and Liz Hallahan

In addition to racing, Jim is a tireless worker for many charities over the years including the Children’s Wish Foundation, Rainbow Haven, a summer camp for under privileged children and the Boys and Girls Club of Dartmouth among many others. He still lives in Dartmouth today with wife Liz. Jim still works at Scotia Speedworld and the Parts For Trucks Pro Stock Tour. I talked to Ken Cunning, General Manager at Scotia Speedworld and he tells me, “Jim was a racer’s racer when he was competing. He is held in high esteem by our current drivers, which is evident with the respect he is shown around the track.” He tells me Jim still has that “can do” attitude and is there to offer help and support for the teams and is caring, enthusiastic, supporting and genuinely wishes for driver success. “I think the evidence of how people feel about Jim is shown by the response they give if you ask folks if they know Jim. They smile and answer, Yeah I know Jim.” Talking to Jim…I can say the same thing with a smile on my face, “I know Jim.”

I want to thank Jim and his wife Liz for all there help and all the information and pictures they sent me, Tara Foster and Ken Cunning for all their help, David Vokey and the information from stories by Monty Mosher, Hugh Townsend and Wheelspin News.

_Randy Spencer writes for www.ontariooval.com and does historical stories from time to time called Back in the Day. You can see more of his work on Ontario Oval._