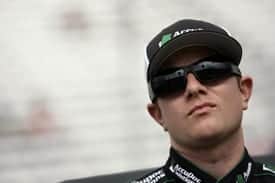 High Point: Leffler nearly had a victory to call his own at Daytona in July, coming up a scant .004 seconds behind race winner Joey Logano. Leffler and Turner teammate Reed Sorenson charged from 14th and 15th at the white flag to the lead battle coming off turn 4, and – with Sorenson pushing – came up a splitter-width short. It would have been Turner Motorsports’ second straight victory after Sorenson had won the hotly-disputed road-course event at Road America the week before.

Another interesting occurrence, this one at Talladega could be considered a “high” point, though Leffler might argue that. In the Aaron’s 312, veteran driver Mike Wallace slammed into Leffler and sent his Chevy airborne, flipping completely over before landing on all four wheels. Wallace went on to finish 18th while Leffler was 15th at the flag.

Low Point: Running strong through the opening cavalcade of races, Leffler was third in points heading into Iowa Speedway. That’s a race the team had circled on the schedule since it came out, as Leffler’s average finish on the racy oval track was a stellar 3.0. Midway through the event, however, Leffler was running sixth when he reported that his engine temperatures were rising. A pit stop followed, and tape was removed from the grille, but the temps kept climbing. Leffler eventually spun in turn 4 after the radiator and water pump broke; he lost 50 laps in the garage replacing them.

The resulting 33rd-place finish knocked him down to fifth in the standings, and he could get no closer the rest of the season. Entering Iowa, he was 15 points out of the lead; leaving town, he was 43 points back, and he finished 194 off champion Ricky Stenhouse Jr.’s total at the end of the season.

Summary: Leffler was always in the hunt in his 34 starts, but never could seal the deal and win a race. Splitting time with Kasey Kahne in the No. 38 Great Clips Impala, Leffler had an impressive eight-race run in the team’s No. 30 machine. Driving that car, Leffler logged five top-10 finishes, with the best a seventh-place result at the second Bristol race in August. He also had a pair of eighths and a pair of ninths in that run.

Largely unaffected by the sponsorship drain of Dollar General’s exit, while the No. 32 struggled Leffler held firm at his consistent best, putting together an average finish of 13.8. He led just nine laps, however, a troubling number that might have been the final straw when it came to his future.

Team Ranking: Third of four. Leffler finished sixth in driver points this season, splitting time with Kahne in the No. 38 Great Clips Chevrolet and running eight races in the team’s No. 30 AccuDoc Impala. Teammates Justin Allgaier (third) and Sorenson (fifth) finished ahead of the California native in the final points, though Sorenson did not race the final six races for the team after Dollar General announced it was headed elsewhere for 2012.

Leffler was a fast starter, leading the points after the spring Bristol race and again after the first Talladega event before running into trouble in May at Iowa Speedway. His 33rd-place performance there dropped him to fifth in the points, and he ran fifth or sixth the rest of the way.

2012 Outlook: After six full seasons behind the wheel of the No. 38 under two different owners, the love between Leffler and Great Clips has finally run out. Sixth was simply not successful enough for the powers that be, with owner Steve Turner handing Leffler his end-of-season walking papers in late August. The free agent is still searching for a full-time ride at press time, although the door remains open to return to Turner if new sponsorship can be found. Now 36 years old and 0-for-2 on major Sprint Cup opportunities, though it could be the end of the line for one of the sport’s more consistent veterans on the Nationwide level.