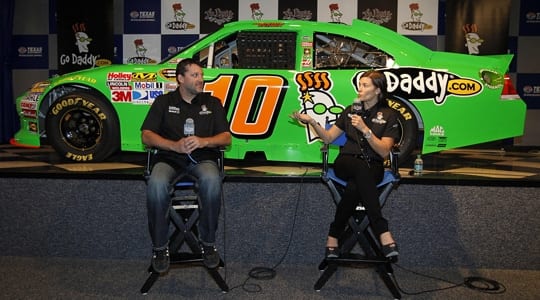 The introduction of Danica Patrick in 2012 is just one of many offseason changes keeping the mood at the Stewart-Haas Racing shop exciting and fun this time of year.

Stewart-Haas Racing has a lot going for it these days.

Tony Stewart and his No. 14 team put on a clinic during the 2011 Chase, charging to the championship, then brought in proven crew chief Steve Addington to lead the way in 2012. Ryan Newman’s No. 39 team has been able to attract multiple sponsors new to the organization and NASCAR itself, paired with a crew returning virtually intact for the coming season. Newcomer Danica Patrick is slated to race ten Sprint Cup Series events, bringing with it the publicity and hype surrounding her that will lead to millions in additional sponsorship and exposure.

Yet, perhaps the best thing SHR has going for it in 2012 isn’t its past on-track success; it’s the present, off-track camaraderie within the team itself. Unlike many Sprint Cup Series organizations, Stewart-Haas is a small, close-knit group of people with one common interest – racing.

“It’s a smaller group, which allows you to be a race team, for a lack of a better way of saying it,” said Vice President of Competition Matt Borland. “We’ve managed to build a group of people that love racing. They’re not doing it because it’s a job or because it’s a management experience. They want to win, they want to go race.”

For Borland, that love of the sport comes right from the top in team owner Tony Stewart. Not only does Stewart give back to racing, in all forms as the owner of multiple racetracks, he is always competing in something on wheels when not focusing on the NASCAR side of things.

“Tony is an incredible leader, yet he doesn’t say a whole lot of words,” Borland said. “He draws people to have that same passion for racing. That has helped our program get better faster.”

Along with the tight-knit group of people, perhaps one of the biggest advantages for Stewart-Haas is their information and engine sharing program in place with Hendrick Motorsports. While larger teams concern themselves with building motors and chassis, Borland explained their team is able to, in a way, “ignore engines completely.”

“We’re able to trust completely in Hendrick,” Borland said. “They’re the best at what they do. They provide us great motors, so we focus on things other than motors. Same thing on the chassis side, they build the best chassis out there.”

“It frees your people up to think about aero, all those other little parts of these cars that get you just that little bit better.”

Joining Stewart-Haas after years at Joe Gibbs Racing, new Director of Competition Greg Zipadelli has also noticed the solid chemistry. He said the smaller group of people in the shop makes it “easier to get things done.”

“There’s more racers because of the amount of the people there,” he explained. “The systems work pretty good. Joe Gibbs Racing had gotten so big, the systems were bigger, it took more to get things through, but they could do more in a shorter amount of time when needed. There’s a balance there in our sport of not taking the racing out of racing, but yet still being efficient at what you do in getting a very good product out there to race week-in and week-out.”

For Addington, the biggest difference he has noticed since joining has been the people within the organization.

That environment of mutual respect allows guys from various departments to bounce ideas off each other, finding answers quickly that produce better race cars. Ultimately, though it creates an environment where work is fun, employees enjoy what they do and the product shows once on the track.

It’s a model they hope will continue to bring home championships in 2012.