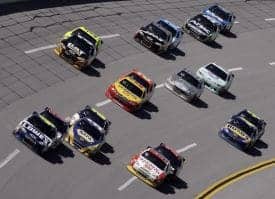 When NASCAR delivered the organization’s annual “State Of The Sport” update to the media this week, the theme of the day was an emphasis on the positives from 2011. The sanctioning body praised 18 different Cup winners, including five first-timers, the closest championship battle the sport has ever seen, increased ratings and race attendance – then transitioned into the sanctioning body’s desire to carry that momentum into 2012. The biggest change in pursuing strategy was simple: keep the “status quo,” with little if any adjustments to the series to open the year. Electronic fuel injection is coming, but it isn’t likely to have a large impact on what race fans see on the racetrack. The 2013 race car will begin on-track testing next week, and, while a fantastic-looking vehicle remains a year away from competition. The “Boys Have At It” philosophy with on-track retaliation, popular with fans and drivers remains in place.

NASCAR has made significant strides in eliminating the two-car tandems prevalent at Daytona and Talladega the last two seasons. But is that the right move for the sport?

But the one change that NASCAR did make over the offseason, designed on the surface to “please fans” is the one people should actually be worried about.

Whether you love or hate the tandem drafting at Daytona and Talladega, NASCAR’s response – trying everything they can to eliminate it, short of an outright ban – should be alarming to race fans. It’s the beginning of what could turn into a snowball effect, and it also goes against much of what NASCAR has stood for in the last decade from a safety standpoint.

It’s important to look at the bigger picture here. While many fans dislike the tandem drafting for a variety of reasons, it’s the natural product of the sport’s evolution. The practice has come about because of a combination of newer surfaces at Daytona and Talladega, the effect of the restrictor plate on the cars, the current aerodynamic package, and the fact that it’s the fastest way around a plate track right now. Those are all natural things as the sport and the race cars change.

Making rules that manipulate the way drivers are allowed to race the racetrack is _not_ a natural part of the evolution of racing when they are not made for the safety of the drivers. The restrictor plates, though they do drastically affect the competition, are necessary to reduce the risk of catastrophic injury. It’s likely that without them, speeds would approach 240-250 miles per hour, dangerous territory even if drivers aren’t racing in close quarters. But eliminating the tandem drafting is not a safety issue; it’s simply an aesthetic one.

NASCAR Vice President of Competition Robin Pemberton says that fans’ (not the drivers’, though many don’t like it either) general dislike of the current drafting style was the reason to pursue elimination of the two-car draft. Pemberton also justified the move from an entertainment standpoint. “When you get to such a small percentage of fans that enjoy the tandem-type racing – and we’ve watched the trend – it hasn’t been just the last four races,” Pemberton said on Thursday. “It started at Talladega a number of years ago when you saw a couple of the drivers that learned how to do it and it just grew and grew. Yeah, it’s a slippery slope, but trying to go back to a larger pack-type racing is not new for us. There are some great races that have happened over time in the history of the high banks at Daytona and Talladega. We have to take control of some of those situations where it’s not good for the sport to [keep from putting] on a race that the vast majority doesn’t like.”

Slippery slope is right. Could this move open the door for NASCAR to manipulate the racing in other situations? Fans have expressed dislike for fuel mileage finishes; does this “control” mean there is the possibility of inserting a competition caution within the last fuel window (whether the reason is phantom debris or simply the truth, that it is a competition yellow) if the race would otherwise come down to mileage through a green-flag ending? That’s dangerous territory as it could very well have implications on the actual outcome of the event, taking the win from a team who played the strategy for the race conditions or taking the need for strategy among teams away completely because they all know a caution is coming.

And what about other issues fans voice displeasure about? If NASCAR is willing to manipulate the racing itself in the interest of “entertainment,” would the sanctioning body be willing to stack the deck further “in the name of the fans?” After all, lots of them don’t like it when Jimmie Johnson or Kyle Busch wins… or when Dale Earnhardt, Jr. doesn’t. Could a well-timed caution, a minor rules tweak in the name of parity, a small penalty for something not previously focused on be used to manipulate the actual race results on the racetrack? Some people already wonder if this practice happens. If the tweaks continue, it becomes increasingly hard to deny.

Pack racing has its benefits, but when the wrecks happen… they turn ugly, often involving up to half the 43-car field in their aftermath.

The other reason fans should worry about this manipulation of the racing isn’t about conspiracy theories or snowballing rules. It’s much more basic than that. It’s about driver safety. Wrecks in pack drafting often involve more than a dozen cars – it’s not uncommon to see 20 or more caught up. Compare that to the tandems, where crashes have generally involved just a handful of cars, usually fewer than five. The math and the physics are simple: the fewer vehicles involved in a wreck, the less chance there is for someone to get hurt. Is NASCAR becoming complacent about the safety of its race cars and tracks eleven seasons after its last on-track fatality?

When asked about whether the rules were justified from a safety standpoint, Sprint Cup Series Director John Darby responded. “At the end of the day, there are 43 drivers driving race cars in excess of 200 miles an hour,” he said. “Whether they’re in a pack or if they’re single. When you look at the safety aspect of racing anywhere, there is always an inherent danger, but the bottom line is… there’s 43 guys out there exceeding a 200 mile an hour speed limit, so there’s going to be a little bit of that there. That’s why Mike [Helton] and his group at the R & D Center works nonstop to make sure that the level of our safety in our cars is there.”

There is no denying that the current car is safer than ever before, especially paired with the SAFER barrier that lines at least the corners of every oval on the circuit and the HANS devices that hold the drivers’ heads still during an impact. It’s true that there hasn’t been a fatality since the crash that claimed Dale Earnhardt in 2001. NASCAR has made huge safety gains in the years since Earnhardt’s tragic wreck. But have they made so many that they have become complacent in a sport where complacency could still mean a fatality?

Sure, there is inherent risk in racing. It can’t and shouldn’t be eliminated. But if there is a way to reduce that risk, it should happen. The tandem draft has so far shown to be safer in that it reduces the number of cars involved in each incident. It’s hard to reconcile not wanting racing to be safer… unless you’re watching for the wrecks. That aspect probably figures heavily in many fans’ dislike of the tandems, truth be told. If fans are not watching for the wrecks, then they should not be in favor of NASCAR’s move to eliminate the tandems artificially, because it undercuts the purpose of the sport and the integrity of the sanctioning body.

While the idea of returning to pack racing at the restrictor plate tracks does have some fan appeal, when it works right and it’s encouraging on one level to hear that NASCAR is doing that, the move seems artificial, hollow. In a poll on NASCAR’s own website last year, over 75% of fans said they didn’t like the Chase format, but NASCAR has made no move to change that. Fans have lobbied for years to return the Southern 500 to Labor Day Weekend, but those requests have fallen on deaf ears as well. So it’s hard to believe that this adjustment is done for only their benefit. But if it’s because some drivers have complained, why not just say that? Listening to teams is equally important to listening to fans for the sanctioning body.

Eliminating the tandem draft may make four races a year more desirable to some fans, it’s true. And it’s also true that NASCAR has made an attempt to listen to them. But this particular rule change has the potential to undermine the whole sport. Is it a one-time thing, or will manipulating the way teams race on the track spread to other tracks, other situations as fans clamor for more? Like the tandems or not, the big picture is that that’s not a pretty picture for the future of the sport, and neither is a fatality caused by a driver getting caught in a multi-car crash that he might have avoided in a two-car drafting situation. It’s just not a good direction for NASCAR to be heading. It’s not about eliminating one aspect of racing that fans dislike; it’s about opening the door for manipulating the outcome of races significantly, and for someone to get hurt along the way.