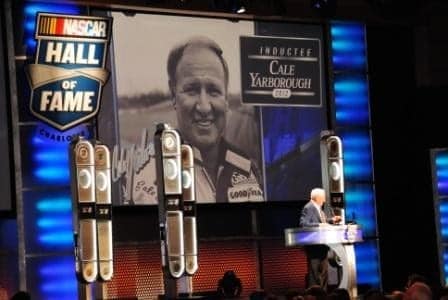 Timmonsville South Carolina’s Cale Yarborough joins the other 14 men who have been inducted into the NASCAR Hall of Fame.
Photo by Hunter Thomas

CHARLOTTE, N.C. – After a long, rough career, Timmonsville’s Cale Yarborough was finally inducted into the NASCAR Hall of Fame on Friday, January 20.

From farming in nearby Sardis, S.C. in the hot summers, to racing underneath the Friday night lights at Florence Motor Speedway, Cale Yarborough was able to capture three championships, 83 victories and 69 poles in NASCAR’s premier series, the NASCAR Sprint Cup Series. During his 31 year career, no moment was more memorable than at 9:05 p.m. on Friday night when he was inducted into the NASCAR Hall of Fame.

“I’m going to remember that this was one of the best days of my life,” Cale Yarborough said. “This is what I have — I didn’t know I was working for it, but I’ve worked for all of my life, and it just happened tonight. I’m just so proud to be a part of it and been so blessed to climb that long ladder from the bottom step, now I’m standing on that top step. Can’t go any higher, but can’t nobody push me off, either.”

The night started off with a red carpet ceremony on the NASCAR Hall of Fame Glory Road. Photographers and journalist lined the way snapping a few pictures and possibly getting a quote or two before the jacket presentation dinner. Once in the Crown Ballroom, the electric atmosphere started to engulf the inductees along with their families. Multi-colored lights were flashing everywhere and the epic music set the tone and got everyone’s adrenaline flowing.

Former broadcaster Ken Squier kicked off Yarborough’s induction by giving a little background information about his early days in the Pee Dee area, eventually leading up to his NASCAR career. When the time came for Yarborough to hit the stage, the nearly packed room stood up and erupted in a deafening outburst of cheers and claps.

When Yarborough was on the stage, he couldn’t help but grin, and it was easy to see the sparkle in his eye as the entire NASCAR community took a little over 10 minutes to honor the South Carolinian. Yarborough kicked off the speech with a joke about his wife Betty Jo buying an expensive dress for the occasion, but what really made everyone laugh was his true story about a few cans of black eyed peas. Yes, black eyed peas!

The story brought on a few laughs, but it’s a strong reminder on how far Yarborough has actually come in his career, and he certainly hasn’t forgotten that. After the black eyed peas story, Yarborough continued to thank everyone who helped him get to the NASCAR Hall of Fame. As soon as the ceremony was over, Yarborough went to the media room. While talking with the media, he was asked to reminisce on the night and put it all into perspective.

“Well, I sure hoped I was going to get to this point because working in the back of the fields in that hot sun would make you want to do something else, I’ll tell you that,” NASCAR Hall of Fame inductee Yarborough said. “I always dreamed of doing what – ending up where I have ended up tonight. Very blessed.”

Yarborough’s weekend ended on Sunday with the induction of his historic No. 28 Hardees sponsored race car along with the Granite Market Photo Opp, and the Presentation of Lifetime Membership.

Yarborough wasn’t the only local getting attention form the media and fans. On Saturday, an estimated 75 to 80 fans camped out along the busy streets of Charlotte in the pouring rain to get an autograph of their favorite driver at the Charlotte Convention Center for the conclusion of the NASCAR Acceleration weekend. Darlington Raceway had a very vibrant display as they sold tickets for Mother’s Day weekend, and Rockingham Speedway set up shop to promote the return of NASCAR on April 15 for the Good Sam Roadside Assistance Carolina 200.