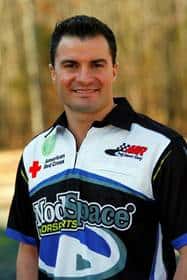 Coming off a strong 2010 campaign that saw him score his first career ARCA win and finish top-five in points, Mikey Kile certainly wasn’t planning to all but take the 2011 season off. Sponsorship troubles kept the Louisiana native off track for all but five Nationwide Series starts, his last coming during the summer stretch at Iowa.

That being said, he may as well have from an ARCA standpoint. With a double-edged assault of Tim George Jr. and eventual 2011 champion Ty Dillon, Richard Childress Racing combined to win seven poles and eight of the 19 ARCA Racing Series events run last year, utterly dominating the series in a display that was the polar opposite of 2010, where three competitors entered the final race at Rockingham with a shot at the title.

Now, Kile has returned to the ARCA ranks with one of the series’ longtime mainstays in Andy Belmont Racing, driving the iconic No. 1 car.

“Sponsorship is just so hard to find. So, I only ran five races last year, and that wasn’t nearly enough seat time,” said Kile of his disappointing 2011. “So Andy called me, he had the ModSpace deal, and they wanted to put me in the car. So I figured why not? We’ll go run the full deal, I’ll get the seat time to get myself better, and we’ll work on funding for some Trucks or Nationwide stuff for the future.”

It’s a plan that’s not foreign to ABR’s No. 1 team, or to success. Just a season ago, former Truck Series regular Chad McCumbee returned to the ARCA ranks to run for ABR, and turned in a career year, posting his first series win since 2007 and winning the prestigious Bill France Four Crown. Now, Kile’s taking the seat… because McCumbee’s success led to a full-time ride in Grand-Am Racing.

His new home with ABR is a different situation than his previous ARCA tenure at the helm of the Venturini Motorsports flagship No. 25 car. According to the driver, that’s not a bad thing.

“[The] Venturini [cars have] got a lot of teammates, I don’t know if that’s an advantage or not,” said Kile as he was asked to compare his old ride to the No. 1. “But I like this deal. They ran well last year, and with the folks they’ve brought on board, their bodies are better this year. Their engines are better this year. And I’m basically the only car running at ABR, so all their attention is focused on the one car. There’s very few disadvantages, to be honest with you.”

It’s a satisfying situation for a driver seeking a return to both Victory Lane and racing relevancy. For any and all development drivers in the ARCA ranks, 2012 sets a tantalizing plate; with RCR and their powerhouse cars off the entry lists, the upcoming campaign ranks as the most wide-open ARCA has seen in recent memory. And it’s a championship race that’s not even remotely on the brain.

After all, ARCA’s racers first have to get through a season-opener at Daytona promises to be just that, wide open.

For Kile, it’s something new; he’s never raced on the repaved Daytona surface (“it’s like racing on an interstate,” he remarked). And for race fans, it will be a blast from the past, as the four-hour ARCA practice session run Thursday afternoon yielded not two-car tandems, but the pack drafting seen at the Daytona of old.

“Today, it was pack drafting,” said Kile less than an hour after coming off the track from practice. “I think personally it’s going to be pack drafting until the final few laps, then you’re going to see a few guys trying it [the tandem].”

It’s hardly surprising; with the varying calibers of equipment that make up any ARCA field, the practice of riding in back and pairing up early that characterizes NASCAR plate races is far riskier, with the ability to draft to and from the front of the field much more limited. Bobby Gerhart’s recent run of success at Daytona is proof positive of such; each of his last two victories at Daytona have come not as a result of precision drafting, but because the No. 5 team figures out a way to get their stout machine up front and simply hold the rest of the field at bay.

This reality isn’t lost on Kile, despite his 12-month layoff from ARCA racing.

“I’ve thought about it. I’ve probably run the race about 500 times in my mind since I found out I was doing this deal with Andy,” recalled Kile when asked if he’d be seeking a dance partner before taking the green flag Saturday. “But it’s hard to gameplan when you don’t know who you’re going to be around with 10 laps to go.”

After Daytona however, the gameplan gets clear. And it’s again not focused on the unpredictable title race. Rather, it’s on the next one.

“I believe Andy [Belmont] would have us run every lap as hard we can, do everything we can to win, and the points will take care of themselves,” said Kile when asked if the lack of a clear favorite in 2012 affected his outlook on the season. “I’m not going to worry about points right now, there’s 20 races. When it gets down to 10 races to go, we’ll start looking at it, but for now we’re just going week to week trying to win races.”

That’s a chomp at the bit attitude fit for a driver that spent the better part of last season on the sideline. ARCA may not be the end goal, but for now Mikey Kile’s ready to call it home again.

“[After Daytona] we’ll test at Mobile, and we’re working on finding some sponsorship to do some Truck races or do some NNS races,” Kile states of his 2012 plans. “But for now we’re just short track testing, getting ready for Mobile.”

And forget about that long layoff from racing.

“It’s like riding a bike,” said the driver of his readiness. “We’ll be in the swing of things come Saturday.”