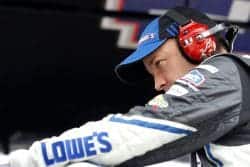 _Did you see all of the race action this weekend? Not sure what to take from it? Or, like many busy fans, did you miss a late-night adventure, a Friday controversy, or a juicy piece of news? If you did, you’ve come to the right place! Each week, The Frontstretch will break down the racing, series by series, to bring you the biggest stories that you need to watch during the week ahead. Let our experts help you get up to speed no matter what series you might have missed, all in this week’s edition of Pace Laps!_

*NASCAR Sprint Cup Series: Violations Found on No. 48 and 15 – What Will the Consequences Be?* Just two days after NASCAR announced a possible penalty for the No. 48 team of Jimmie Johnson, for a C-post that officials didn’t like the look of (the car did reportedly fit the common template), the No. 15 of Clint Bowyer was also tagged for a height violation found in post-qualifying inspection. Because the No. 48 was found out of tolerance before the car ever took to the track, penalties will be assessed after the Daytona 500, and may be the biggest ever seen for a template violation, according to NASCAR President Mike Helton.

Is Chad Knaus up to his usual shenanigans yet again, or victim of a NASCAR witch hunt?

Car owner Rick Hendrick disagreed with the finding, saying on Sunday that the same car was raced four times last year and passed all inspections, including two complete teardowns at NASCAR’s R&D Center. According to Hendrick, the area in question was never altered on that Chevy, which was the same one whose rear end Chad Knaus “asked Jimmie Johnson to wreck at Talladega last Fall”:http://www.youtube.com/watch?v=Hz8onQYazuQ and passed inspection at that time. Will the infraction affect Johnson as he prepares for the Great American Race? Don’t count on it; last time his team had an issue in Daytona, Johnson won the race anyway, with Darian Grubb filling in for a suspended Knaus atop the box in 2006.

In Bowyer’s case, because the No. 15 completed their qualifying run before the violation was discovered, any penalties could come this week. Consequences for post-qualifying violations have been handed out before the 500 in the past – including immediate suspensions of multiple crew chiefs for the 2007 event (think “jet fuel” incident) – but NASCAR has said that further penalties are unlikely in this case, keeping Brian Pattie safely atop the box. Bowyer’s time has already been disallowed, and he will start his Gatorade Duel at the back of the field. But how much of a penalty is that, really? He is guaranteed a starting spot in the Daytona 500 based on 2011 owner points, and could still start as high as fourth on Sunday. _–Amy Henderson_

*ARCA: Gerhart Eclipses the King* To say Bobby Gerhart is living a charmed life at Daytona is an understatement. Saturday, Gerhart’s No. 5 team started 42nd after having their qualifying time disallowed, got lapped early after pitting on the race’s first lap for fuel, saw said fuel mileage strategy appear to blow up in their face after ARCA’s season opener took on a surprising green-flag look, was running fifth in line through Turn 4 on the final lap… and still won the race. Leader Brandon McReynolds ran out of gas coming to the checkers, the Red Sea parted, and there was Gerhart, charging on the high side to his record eighth win at the World Center of Racing. No one, even the great King Richard Petty has ever won the same event at the speedway that many times.

Besides the record breaker, chalk this Daytona race up like any other in the ARCA ranks: an exciting race and a great preview of talent to come (late model racer McReynolds posted the strongest performance of his brief ARCA career, defending East Series champion Max Gresham and UARA late model champion Brennan Poole each scored top 10s). The title chase will really start in Mobile in a few weeks. For now, though, King Gerhart continues to reign over his throne as ARCA’s restrictor plate master. _–Bryan Davis Keith_

19-year-old Kyle Larson scored a breakthrough victory at New Smyrna in January, just his first time in a stock car which led to his recent signing with Earnhardt Ganassi Racing for 2012.

*Short Tracks: Is Kyle Larson the Next Big Star?* Kyle Larson’s life has been transformed in the last 12 months. The driver from Elk Grove, California began competing on a national scale for the first time in his career in 2011. Larson proceeded to turn heads wherever he went, with his biggest accomplishment being a sweep of the 4-Crown Nationals at Tony Stewart’s Eldora Speedway in Ohio. That’s right: Larson won races in a Midget, a Sprint Car and a Silver Crown car all in the same night. He ended the 2011 season with 22 feature wins in major events, scoring them in both World of Outlaws and ASCS winged sprint cars. A hot free agent commodity in the stock car ranks, Larson, who is Japanese American started 2012 with a major announcement as he was introduced as the latest member of the NASCAR Drive for Diversity lineup. He then proceeded to get into a Super Late Model and won the Pete Orr Memorial at New Smyrna Speedway – his _first race_ in a full-bodied stock car. Last week, he already took the next step with a deal to be a developmental driver for Earnhardt Ganassi Racing. At 19 years old, Larson is undoubtedly one of the fastest rising stars in auto racing today, and it’s only going to get better from here. Look for EGR to set him up in NASCAR’s minor leagues and get him on the fast track to Trucks or Nationwide sooner than you think. _- Mike Neff_

To read about Larson’s win in the Pete Orr Memorial, and for more information on all of the race results from Speedweeks in Florida, check out the “Frontstretch Short Track page”:https://frontstretch.com/shorttracks/