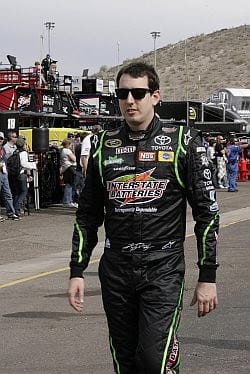 Frontstretch readers, welcome to the 2012 season of Who’s Hot/ Who’s Not! The Sprint Cup Series hasn’t even run a points race yet, but already drivers and teams are separating themselves from the pack.

Before we dive in, let’s give a call out to NASCAR. Fans went into Saturday night’s Budweiser Shootout not knowing what to expect and came out wanting more. The Shootout had everything they’ve been clamoring for: three-wide pack racing, constant lead changes, exciting wrecks, and an even more thrilling finish. NASCAR implemented a number of rule changes in the off-season aimed at breaking up the two-car tandem to deliver the type of racing we saw on Saturday night. Not only did NASCAR deliver fans a memorable Budweiser Shootout, they increased the hype heading into Sunday’s Daytona 500.

Kyle Busch is out to prove nobody should be looking for him to fail in 2012 with a killer performance at the Bud Shootout.

*Kyle Busch* was out-qualified on Sunday by David Stremme and Tony Raines. On Saturday night, he proved it doesn’t matter. The Joe Gibbs stable has lacked qualifying speed since they unloaded for preseason testing, but in the Budweiser Shootout, Busch and teammate Joey Logano looked pretty sporty in race trim.

Busch was involved in two accidents, but pulled miraculous saves both times to keep himself in contention. On the green-white-checkered restart, Busch took the green in eighth place. On the final lap, he set up last year’s champion Tony Stewart perfectly and used the side draft to pull his Toyota to victory.

Last season was memorable for Rowdy for all the wrong reasons. He’s already added a positive memory to 2012.

*Carl Edwards* made a statement on Sunday: the No. 99 is really, really fast. I don’t know why this isn’t being talked about more, but Edwards (46.216 sec.) was more than a tenth and a half faster than teammate Greg Biffle (46.371). In this day and age, a tenth and a half is nothing to laugh at. Look at the gaps between the rest of the field and you will see just how significant it is. For example, Biffle was only .014 seconds faster than third-place Dale Earnhardt Jr.

Edwards isn’t known as a top super-speedway racer, but he has some steam under the hood for Sunday, and should be considered an early favorite.

*Tony Stewart* and new crew chief Steve Addington were inches from scoring a victory in their first race together on Saturday night. Stewart showed some veteran savvy during the Shootout, laying back at times, while picking other moments to charge to the front. He avoided the big wrecks and thanks to a heck of a push from Busch, put himself in position to win.

Stewart has looked strong throughout Speedweeks. He was the 10th fastest car on Sunday and should be a factor in the second Gatorade Duel race.

Elliot Sadler, Ricky Stenhouse and Danica Patrick were guaranteed starting spots for the Daytona 500 before qualifying began, but the 2011 Daytona 500 champion was on the outside looking in. Life isn’t always fair, but *Trevor Bayne* never complained, and on Sunday he locked himself into the Great American Race on speed with the ninth fastest time.

Bayne, one of the sport’s rising stars, is only scheduled to compete in around 20 races with the Wood Brothers in the Sprint Cup Series. Plus, for sponsorship reasons, Bayne is guaranteed a handful of races in the Nationwide Series with Roush Fenway Racing in 2012. Through all this Bayne keeps smiling, and seeing this kid lock himself in on Sunday to get a shot at defending his title was definitely one of the feel-good stories from the weekend.

*A. J. Allmendinger* had all of the momentum in the world on his side heading into the Budweiser Shootout, being handed the ride of a lifetime with Penske Racing in the offseason after the exit of Kurt Busch. The driver celebrated by going out and winning the Rolex 24 at Daytona. Unfortunately, he hasn’t made a peep since.

The Penske cars have lacked qualifying speed, but were expected to race well in the Shootout. Following a wreck in practice, Allmendinger was a non-factor all race before getting caught up in another crash at the end. The sub-par Shootout run wouldn’t stick out as much if the No. 22 car hadn’t gone to Victory Lane one year ago with Kurt Busch behind the wheel, but the Dinger’s maiden voyage with the Penske camp was one to forget.

Kyle Busch and Logano were strong throughout the Shootout, but teammate *Denny Hamlin* didn’t seem to have the same speed. He received minor damage from a wreck early in the race, and while hedrove back up to the top-five, he didn’t have anything for the leaders. On Sunday, Hamlin was the 37th fastest car in qualifying. After a dismal 2011 campaign, the No. 11 team has a lot to prove this season with new crew chief Darian Grubb, and so far they’ve proven nothing.

For the second time in the last seven seasons, *Jimmie Johnson* is in hot water before the first race has even been run. The folks at Hendrick Motorsports got a little too creative with C-Posts on the No. 48, leading to NASCAR confiscating the parts before the car ever took to the track. Crew chief Chad Knaus has been known to bend the rules in the past, and his reputation isn’t improving after this incident. Whether it comes before or after the Daytona 500, this team is going to face some hefty fines and probably some suspensions, too. Since Knaus has a history with NASCAR, don’t be surprised if they really come down hard on the champion crew chief. This certainly isn’t the way the No. 48 team wanted to start the season.

*The rest of Hendrick Motorsports* hasn’t fared much better in Speedweeks. Johnson is the biggest story, but it has been a tough road for one of the sport’s premier teams. For starters, Rick Hendrick suffered an expensive Saturday night at the Shootout after all four of his cars ended up destroyed thanks in large part to an over-aggressive move from Jeff Gordon late in the race.