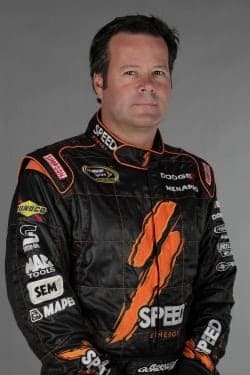 For years now, Robby Gordon has been an obstinate, stubborn presence on the NASCAR circuit, an independent owner/driver that defied NASCAR’s business model when he went his own way after splitting with Richard Childress Racing after 2004.

Thursday, he made it work yet again, as those same personality traits propelled the No. 7 car into the Daytona 500. Despite having heavy smoke pluming from the car starting on lap 1 (Gordon would later note that oil, having seeped into the foam around his radiator tray was responsible), he didn’t pit, opting to ride it out even with the seeming threat of engine or tire failure looming. Despite the car running hot enough for him to radio concerns to his team during the race’s midsection, he pressed onward.

And despite running on the very outskirts of the pack draft with only two laps to go in his Duel race, fellow go-or-go-homers Trevor Bayne and Michael McDowell both working together and ahead of his Dodge, Robby Gordon kept the pedal to the floor…and got his car into the show.

“Making the Daytona 500 is the big event for NASCAR racing,” Gordon told the press in the media center following the Duel. “We’re not comfortable doing it [racing underfunded] but it’s working. We’re still racing, putting ourselves in a position to win races. We just made the Daytona 500, so I’m really, really proud of the guys that are working at the shop.”

All 10 of the guys. Including the receptionist/parts/merchandise sales lady.

The driver went further, talking about how a big chunk of the dollars the team would be winning upon starting Sunday’s race would be going towards buying a Penske engine to allow the team to race competitively in the 500 (the myriad of overheating issues had the owner/driver concerned about the car’s current Arrington power plant).

Yet after what could only be described as “a heartfelt speech” on Twitter, Gordon left the media center podium, then proceeded to remark to a number of writers that his “hard-earned” spot was up for grabs… and he knew just who should take it. Almost instantly, the No. 7’s spot in the Great American Race was being propositioned to one Michael Waltrip, who missed the 500 after spinning himself trying to blend back onto the track following a pit stop.

“Everything’s for sale,” Gordon reportedly reiterated in the garage following his time in the media center.

Robby Gordon’s qualification for the Daytona 500 quickly went from a matter of celebration to a matter of business this Thursday afternoon.

Many fellow media members reacted with shock and awe. Blount called the remarks a departure from the “heartfelt speech” he’d coined on Twitter. Lewis Franck tweeted he had never seen somebody so unhappy to make the Daytona 500. The mood regarding Gordon’s qualifying went from success story to sour in a heartbeat.

Like it or not, Gordon’s NASCAR reality isn’t a happy one, in or out of the 500.

Sure, on paper it’s great. A chance to run for stock car racing’s biggest trophy at best, at worst a guaranteed payday of over a quarter million dollars. But take away half of that payday right off the bat, just to pay for a Penske engine to allow the No. 7 to attempt competing in Sunday’s 500. Gordon is also driving for a single-car operation, one of only three Dodges in a 43-car field, and a racer that hasn’t scored a top 10 on a plate track since 2008, and the odds of scoring a Cinderella result temper quickly. After all, who can forget last year’s Dodge story of the Duels, Brian Keselowski? He made the 500, only to be swept up in a wreck early and fail to qualify for a single Cup race the rest of the 2011 season. Making the 500 does not turn a pumpkin into a carriage indefinitely.

“It’s not like you keep the money at the end of the day in this sport,” remarked Gordon. In fact, earlier during Speedweeks he claimed the amount of out-of-pocket costs he’s made since becoming a car owner again, in 2005 have been rather significant.

The truth is, times are as tough as they have ever been for the independent team in NASCAR. And this is a fight that Robby Gordon has been fighting for over half a decade now, a battle that’s clearly taken a toll. An overly aggressive firebrand during his time at Richard Childress Racing, the Gordon on display for the media on this Thursday was considerably more subdued, hardened, even weathered.

The defiance that has long characterized Gordon was still there…just subtle. Gordon took time to note in his opening remarks that he had major reservations with NASCAR’s past champion’s provisional system (“I guess I should hire Kurt Busch and I could put my other car in the show, too,” he quipped). He used profanity when speaking in the media center and scoffing at the 40 hour work weeks some NASCAR team members work (“shit, my guys work a half day every day”). And he closed his remarks by standing up and remarking “I’m proud to be here [racing NASCAR], proud to be racing the Daytona 500, thank you” in a manner that lacked any real form of sincerity.

There are those out there that would say that same attitude, that almost confrontational demeanor is evidence that Gordon has done himself no favors throughout his career. But Gordon’s never been done any favors by this sport, either. He’s seen his team raked over the coals for a technical violation that Hendrick Motorsports wouldn’t bat an eye at (see the 2008 Daytona 500). He’s been parked for doing things on track that Kyle Busch is lauded for (remember Montreal 2007 anyone?). And again, he’s played David in Goliath’s arena for years now.

Making the Daytona 500 may be among NASCAR’s ultimate dream accomplishments. But no matter the profession, no matter the individual, there comes a day when the dream has to end and reality has to set in. That day has long past for Robby Gordon. He’s not going to win the 500 on Sunday. His race team is not suddenly going to become competitive. Gordon has accepted this reality, banking his future not on his race team, but on a fledgling energy drink company.

So who can blame Gordon for being so willing to put a price tag on his new, most valuable asset? After all, buying rides at Daytona is nothing new (see Roush Fenway Racing and Paul Menard buying out five Nationwide Series teams to make the NNS race back in 2010), and the Waltrips certainly aren’t bashful about buying spots either (who can forget Michael buying Derrike Cope’s car for the 2006 Coca-Cola 600?).

“We’re in a bad state right here,” said Gordon of his race team. “It’s tough. It’s really, really tough. We don’t have anyone on the hook [for sponsorship].”

It’s not a feel-good story. An independent owner/driver makes the Great American Race, and in a span of an hour his reaction goes from an emotional outpouring (“Damn I love you guys!” Gordon exclaimed) to selling a spot in the world’s biggest stock car event.

That’s the reality of the Robby Gordon saga. A driver that was willing to do what so many before him did, putting his name, money and talent on the line to race with the big boys, a driver that’s always been himself on and off the race track, a driver that’s maintained a healthy defiance in an era where both his attitude and his business model aren’t supposed to work.

All of that, reduced to an auctioneer for yet another Waltrip who can’t hang up the helmet.