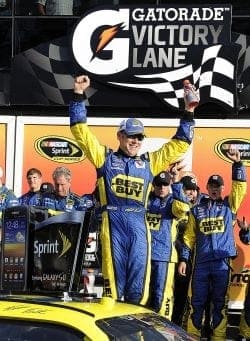 The Key Moment –
Race One – A caution froze the field on the final lap of the race as Dale Earnhardt Jr. was trying to mount a challenge on Tony Stewart for the win.

Race Two – Greg Biffle dominated the race but swept up on the final lap thinking he’d hook up with teammate Matt Kenseth to seal the deal. Instead, Kenseth dove down into the lower lane Biffle had opened for him, towing Jimmie Johnson in his wake to take the lead and the win.

In a Nutshell –
Race One – Yet another example of this weird fusion of pack and tandem racing liberally peppered with violent wrecks.

Race Two – Having seen the carnage in the first race, it appeared the competitors in the second event decided to play nicely with one another.

Race One – Had the three cars driven by Juan Pablo Montoya, Paul Menard, and David Gilliland scattered rather than locking together the wreck would probably have decimated the field.

Race Two – When Johnson drove into the side of Regan Smith battling to the line, it very nearly set off the Big One.

A Few Reasons These Races Don’t Matter Much Anymore
1) With the Top 35 teams in last year’s owner points locked into the race there’s little drama waiting to see who is going to qualify and who’s going home.
2) Starting positions don’t matter much at Daytona where many drivers, even those slated to start at the front of the pack, will purposely drop to the back of the field in an attempt to miss the big wrecks.
3) With the top teams locked into the race, those drivers have little incentive to race hard on Thursday and risk damaging their aero-tweaked play pretties.

A Couple Reasons These Races Do Matter
1) Qualifying position also determines pit stall selection order. We’ve seen time and time again that a good pit stall (easy in, easy out) can be crucial to a good finish in the 500.
2) These races are televised. Racing towards the front of the pack is the best way for a driver to get his car on TV with all the sponsor’s decals clearly in focus. Sponsors get warm fuzzy feelings when their logos are shown on TV. Happy sponsors write the teams big checks to keep them rolling.

Earlier this week, NASCAR raised the pop-off valve in the cars cooling systems to alleviate concerns about overheating after some cars ran hot in last Saturday night’s Shootout. You’ll recall from high school chemistry (about all I recall is the two playful piglets on Ronnie Cage struggling to break free of their pens, so I had to look it up) that as you increase pressure in a vessel, the boiling point of water goes up. At 25 psi (the original maximum allowable pressure) water boils at 240 degrees. At 28 psi (the new allowable max) water boils at 246 degrees. Big deal, huh? Look for some cars to erupt like Mount Vesuvius in Sunday’s 500-mile race.

You have to wonder if there’s some old-fashioned late 1990s politics at play here with the GM overheating issue. Back in those days, one manufacturer or another was always running to NASCAR officialdom crying they were at an unfair disadvantage and needed a rules tweak to run competitively. If Chevy can lobby NASCAR for a larger grille opening prior to the 500, that will negate all the work Ford put into their new-last-year FR9 engine to make it run cooler than the competition. Parity or parody? You decide.

To my way of thinking, the second 150-miler was the better of Thursday’s two events. There was actual racing and strategies in play as opposed to Duel #1, which was way too much wrecking and not enough racing. Yet as I look around online, it seems fans preferred the first race and by a wide margin. Maybe I’ve been wrong all these years. Maybe there is, indeed a much higher percentage of fans who do, in fact watch events hoping to see wrecks, not racing.

There were rumors in the garage area that after Michael Waltrip failed to qualify Robby Gordon, who made the race, offered to sell Waltrip his starting spot. Naturally Waltrip, Toyota’s chief mouthpiece, couldn’t drive Gordon’s Dodge, but Gordon has already hinted unless he can get a Dodge engine from the Penske organization (a rather unlikely possibility, especially given Gordon’s cash-strapped team) he’ll only run a few laps Sunday before parking his car. Editor’s Note: In the media center, Gordon clearly confirmed the ride was up for grabs. But there are no takers as of Friday, early AM…

Smokers are this generation’s lepers. For those who light up, there’s yet another place you can’t indulge your habit, the grandstands at Daytona. DIS is now on a growing list of tracks where smokers aren’t welcome. Ironically, for almost three decades NASCAR’s top division was Winston Cup. You’d think at a track as big as Daytona, NASCAR and the ISC could have found some way to accommodate smokers without forcing those who don’t smoke to sit beside them. (Hell, they don’t even sell tickets for the backstretch grandstands for the July race.) Yes, some people would like to see smoking banned everywhere, but quite frankly if you’re in an uproar about the healthy pink lungs of little Johnnie and his somewhat slow sister Susie, perhaps a race track with 43 high revving race cars and not a catalytic converter in sight might not be your ideal vacation destination, anyway.

What was going on with the synchronization of audio and film in the post-race driver interviews? The lip synching looked like something out of a Saturday afternoon Japanese Kung Fu movie.

SPEED and FOX had three chief storylines they were going to trumpet on Thursday:
1) All Danica Patrick, all the time
2) Kenny Wallace’s determined try to make the 500.
3) FOX’s new broadcast boy Waltrip racing his way into his 25th Daytona 500.
DOH, DOH, DOH.

Among the notables headed home having failed to qualify for the Daytona 500; Bill Elliott, Kenny and Mike Wallace, Waltrip and JJ Yeley.

Waltrip had been in position to make the 500 when he was forced to stop early for gas. Trying to blend back out onto the track exiting the pits, Waltrip spun himself out and went hard into the wall. That’s also a misfortune for TV viewers this Sunday who are going to have to listen to his dimwitted babbling all afternoon.

Patrick took a savage hit on the last lap of the first race, stuffing her Chevy windshield deep into the SAFER barrier. Fortunately, she emerged unhurt. I understand and even applaud the tactic of taking her hands off the wheel prior to impact, protecting her thumbs and wrists, but it sure did look like she was channeling Macaulay Culkin from Home Alone.

Denny Hamlin led more than half of the first race but questionable pit strategy forced him to make a green flag stop en route to a 17th-place finish. For those keeping score at home, that’s Steve Addington – 1, Darian Grubb – 0.

Dale Earnhardt Jr. was sent to the back of the pack for a pit road violation by one of his crew members. He managed to drive to the front of the pack not once, but twice with seeming ease despite reporting to the team he was running at half throttle. There’s clearly a lot of horsepower under the hood of that No. 88, so look for Earnhardt to be a factor Sunday.

I’m still wondering how Smith saved his car after Johnson body-slammed him on the final lap trying to work his way into a hole that clearly wasn’t there.

The way Johnson’s car was blowing steam for the final portion of that race, it’s a wonder he finished at all much less finished second. With the Hendrick-engined cars of Jeff Gordon, Kurt Busch, and Ryan Newman also experiencing overheating issues, it seems the guys in the Hendrick camp have their work cut out for them prior to Sunday’s big race.

Overall Rating (On a scale of one to six beer cans, with one being a stinker and a six-pack an instant classic)

Race One – Three cans of the same old stuff.
Race Two – Four cans, as racing without gimmickry returns to Daytona.

Next Up – The Great American Race (or some semblance thereof) rolls off Sunday afternoon.