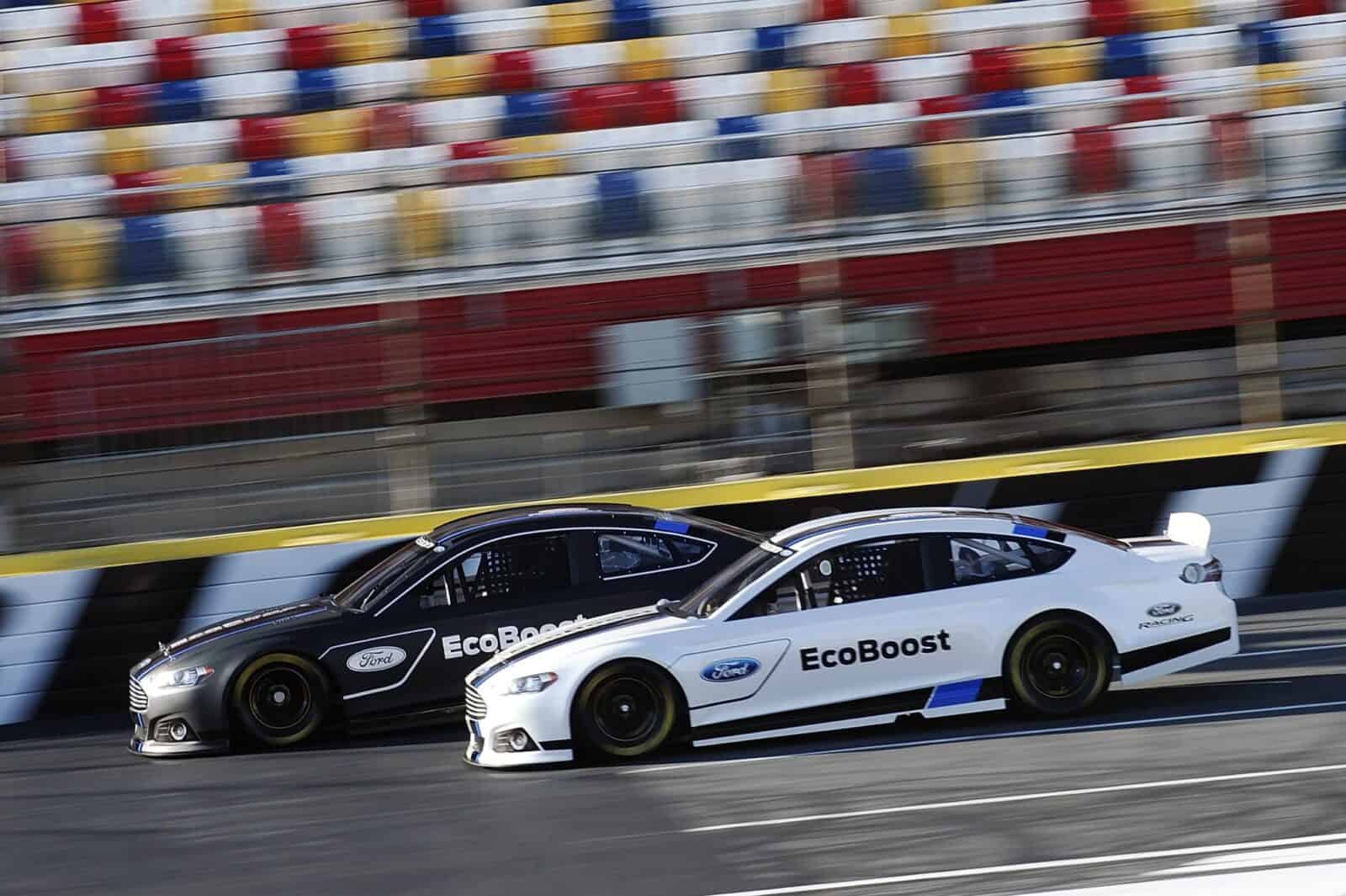 Dave Blake, a race fan from back in the days of the Fairgrounds Motor Speedway, asks, _”John, Do you remember ever seeing Walt Ragland’s Figure-8 ‘animal cars’ at the Fairgrounds in Louisville? I think he had a tiger, a chicken, and my favorite, a jackass painted car. A bunch of us neighborhood kids used to hang around Walt’s garage and ‘help.'”_

I remember those cars. Walt was something of a character. Dave also mentions a Falcon that Walt ran when we started allowing shorter wheelbase cars in the late models that ran there.

Yup, and I remember when he brought it out, I called it a “vulture.” Walt went home and painted some really ugly wings on the side of it, as I remember. Yes, folks, things were a lot simpler in those days, maybe (as I’ve said before) a little more rough and tumble. But I still remember it as being a lot more fun.

—
George in Cedar Rapids wants to know if the return to cars which resemble those on the street is going to really happen in 2013.

These Ford Fusions, scheduled to debut in NASCAR next season give hope that “stock” is on its way back into “stock cars.”

I sure hope so, George. What we’ve seen so far of the “Ford Fusion”:http://blog.mysanantonio.com/clockingin/2012/01/ford-unveils-new-look-for-sprint-cup-fusion/ and “Dodge Charger”:http://www.autoguide.com/auto-news/category/motorsports/nascar is very promising. You can tell the difference between those two, at least. Depending on what Chevrolet and Toyota come up with, I think we’ll see NASCAR do wind tunnel tests to determine which car has an aerodynamic advantage, and then use spoilers, air dams, etc. to try and even the playing field.

Up until the Ford and Dodge were previewed, I wasn’t really hopeful about seeing stock appearing cars on the track. Not that it would have helped me. I can’t tell the difference between one jelly bean-shaped car and another out on the road.
—
One of my favorite people, a safety worker at a short track in the Midwest, asked on Facebook why Kevin Harvick didn’t get close to a fire truck and then bail out of that flaming car of his during the Budweiser Shootout.

That was a pretty simple one. When his spotter told him to “Get out, it was on fire,” Kevin responded that he didn’t have any brakes. Obviously, he was wanting to slow down enough to make it safely out of there.

The TV commentators have told us repeatedly that NASCAR can monitor every car, and can talk to every driver. That makes me wonder why they didn’t do more. A race director who heard or figured out what was happening could have gotten a safety truck in front of that car after it slowed enough, and then backed it down.
—
And, now we touch on the saga of the illegal C pillar on the No. 48 car last week.

Nothing illegal, we’re told, but it just didn’t look right to NASCAR. Nothing new about that. Remember after Ray Evernham brought the T-Rex to Charlotte for Jeff Gordon in the All-Star race? They couldn’t find anything wrong with it, but they told ’em not to bring it back.

Somebody asked why they just didn’t send them home, like some short tracks do. I’ve never worked at a short track or for a sanctioning body that did it like that. It was always a choice: “Fix it, or take it home.” That’s what NASCAR did, after confiscating those C pillars.

Whenever this kind of thing happens, people like to recall Smokey Yunick, the recognized master of finding the “gray” area in the rule book (which wasn’t nearly as big during his time). Noting that the rules said fuel additives would be allowed, Smokey said, “I always considered nitrous oxide to be a fuel additive.”

In another story about Smokey, it’s said that the NASCAR inspectors wanted to see “clean” pieces when the engine was torn down. The story is that Smokey had a tub full of dirty gasoline there when he was doing the teardown. He’d take the camshaft or whatever else he was going to show them out of the engine, drop it in the tub to clean it off, and then hand them a stock cam that was in the tub already.

And there’s always the theory that if you give them something easy to find, they won’t look for anything else. Not true nowadays, of course; the inspections are much more thorough.

However, that philosophy might explain why Harry Hyde, when having labels neatly lettered on his tool box (screwdrivers, sockets, etc.), he had a bottom drawer labeled “TRICK S**T.” And there’s also an old story that at Smokey’s funeral, they found that the casket had been chopped, channeled, and lightened by about 300 pounds.