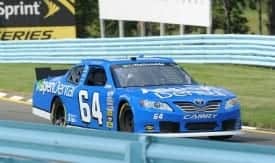 _For three years, there were few drivers out West that could touch Jason Bowles. But after winning the 2009 K&N West Series championship, Bowles like so many before him moved east to stock car racing’s hub, in pursuit of bigger things. And after two years of partial schedules, the California-native finally landed a full-time Nationwide Series ride with MacDonald Motorsports. Frontstretch caught up with Bowles at Daytona to hear from one of the surprisingly underheralded drivers in this year’s rookie crop._

Bryan Davis Keith, Frontstretch.com: How much different is the two-car drafting you’re doing out here from ARCA racing?

*Jason Bowles:* It’s a huge difference, you have to stay hooked up with someone the whole time. You know, [you have] to stay at speed the whole time and stay connected. It’s a fine line, doing that. Some of the guys are more experienced than others, and that makes a huge difference as well. Being a rookie, those yellow stripes on the back are like a big red flag. I’m hoping I can hook up with somebody and they’ll wear them off the back so people don’t realize. But it was good. [Joe] Nemechek pushed me some and helped out a lot.

Keith: You’re a rookie and driving for a single-car team at Daytona…

*Bowles:* Yeah, that makes it more challenging, you have to go and find a friend. But we’ve got to make the best of it. Our goal is first to get to the finish. Everyone saw what Kyle can do in the Bud Shootout, you can wreck all night long and as long as you’re still running at the finish anything can happen. It’s a long race, a long day.

Keith: Talk about the transition from West Series to Nationwide? This has to be a step up.

Bowles made a handful of Nationwide Series starts in 2011 driving for the now defunct Rusty Wallace, Incorporated. (photo courtesy of The Hot Lap’s Phil Cavali)

*Bowles:* It’s definitely a step up. Fortunately I’ve run five Nationwide races, I’ve run three Truck races. It’s definitely a change, but I’m fortunate that I’ve made quite a few friends since I moved to North Carolina that race on Sunday. They’ve been a big help, fortunately everyone in this sport is really helpful. They all want to see you successful. Even if they think it’s a stupid question, they’ll still give me an honest answer.

Keith: Talk about driving for MacDonald Motorsports. They’ve been around forever, but they’re also an underdog operation. What challenges do you face moving from being a powerhouse in the West Series to the back of the Nationwide garage?

*Bowles:* It’s definitely a challenge. We’re not the biggest team and we’re not the best funded, but we’re doing everything we can with what we’ve got. We’re constantly working on securing more funding. We know where we’re lacking, we know where we can improve. We do have more budget than we did last year, it’s getting better. But we are a much smaller team than a lot of these guys.

In the West Series, we’re the biggest team. Obviously cost was a factor, but there if we found something that would help the team, make the car faster, it didn’t matter. It’s definitely a transition. There was a goal there to win races, and if we had to spend money to do it, we spent money to do it. This will be a transition, but I can’t thank Randy [MacDonald] enough. Randy and the guys have worked their tails off to give me an opportunity. But I do feel like I bring some credentials with me from the West Series. I know I can do a good job for them, so hopefully we can raise some more money.

Keith: The West Series cars are a lot closer to kit cars than what’s raced here. How much more flexibility is there with a NNS car to work on it?

*Bowles:* [West racing] with the spec motor, you get only a limited number of tires, no testing because we’re under the same rules as the national series, it makes it a little bit tough. The other teams here, they can go to Nashville and other places we’re not running and test. Tires are expensive, there’s a big variance between owning your own motors or going through a Triad lease program. There’s a huge variance in people. Some of these teams have 40-50 people for a Nationwide car.

We have seven, seven to 10 depending on the day. But we also don’t do everything in house. We don’t do bodies in house, like a KBM does. That’s a benefit to them and a detriment to us, we’re getting what everybody else has got as they develop things no one else has. But that’s part of the sport, and that doesn’t mean we can’t run with them eventually. Unfortunately, this sport is money driven. Everybody knows that, we face it every day. But people are seeing the economy starting to come back a little bit. It’s an election year, so we have American Majority on board, trying to get people out to vote. Everyone knows the economy isn’t what it used to be…people used to go to 10 races a year, now they go to four. Everybody understands that, so if they want a change its time to go vote. Hopefully that pays off for us, helps us get some exposure and raise some funding.

Keith: There looks to be less Cup driver involvement this year. What does that mean for teams and drivers such as yourself?

*Bowles:* I think it’s a fine line. You have to have the Cup drivers. No matter how much people want to get rid of them. You don’t race against the guys you want to race against on Sunday, you’re never going to get as good as them. So you have to have that. They raise the game. Trucks, Nationwide, everything. It’s tough when there’s 15 of them every week, because you’re racing for 16th. When you get with some of these bigger teams, like Ricky [Stenhouse’s], they can get closer. But we can’t, we don’t get to see what their engineers are working on and that sort of thing. [But] I think as a whole it’s probably a benefit to the series, it will leave guys like us some more budget and that sort of thing. Time will tell the tale.

Keith: Danica and Austin Dillon are going to steal a lot of the headlines as ROTY candidates this year. What role can you expect to play in that race as a rookie yourself?

*Bowles:* Well, the rookie deal is only 22 races, so it’s not the whole year. But it’s going to be tough. One is coming from one of the biggest Cup teams there is, and the other is driving with one of the biggest NNS teams. So they obviously have great equipment. Their budget is probably nearly unlimited. That’s not a knock on those guys, they’re making the best of it. But crazy things happen in racing. Trevor Bayne won the Daytona 500 last year. Nobody expected it. This is a sport where the unexpected always happens.

Keith: What does an episode like Bayne’s last year mean to you as a driver?

*Bowles:* It’s huge for a lot of us as drivers. It shows that even though it’s Daytona, you can take a guy that ran the East Series, ran Nationwide, and then all of a sudden won the Daytona 500. The ladder still works. It is still possible. These guys in Cup have got so much experience, it’s tough to get a chance at this level. But Jack Roush took a chance on Bayne, got him over to the Wood Brothers. It shows its absolutely possible to still make it.

Keith: You’re racing for 15th on a good day. The ladder is still there, but you’re at the bottom.

*Bowles:* That’s probably the hardest thing to accept, to go out there and think OK, if we finish 12th, that’s such a good day. That’s not the mentality, that’s not why we race. I’ve been racing for 19 years, and winning races. That’s why I show up every week. But you have to do that going in. And the good thing is, everyone racing on Sunday knows what you’re driving on Saturday. They know what you have for cars, they know what you have for motors. So if you go out there and run ten spots better than you are supposed to, people will take notice.