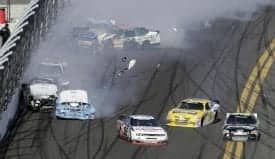 After a Truck Series race Friday night that went down as one of the most destructive, unpredictable endings the sport has ever seen, the Nationwide Series came in and one-upped John King’s unlikely win. Over the course of the race’s final 17 laps, three wrecks collecting 23 cars devastated the field. And when an ill-timed block pinched Tony Stewart into the fence, setting off a melee coming to the checkered flag, James Buescher came from 11th place entering turn 4 only to emerge unscathed down the frontstretch, taking his first career NASCAR victory less than 18 hours after his Turner Motorsports Truck team saw a dominant evening go sour late. Brad Keselowski, Elliott Sadler, Cole Whitt and Austin Dillon rounded out the top 5.

In a departure from the other races of Speedweeks so far, tandem drafting was the story of the day Saturday afternoon, with the leaders running two-by-two at the front while a larger pack ran at the back. This package did absolutely nothing to reduce the wrecks that have plagued racing at Daytona for the past week, though, with only 17 cars finishing this event on the lead lap (and at least six of those were crash-damaged coming to the checkers).

Elliott Sadler will leave Daytona as the points leader, since James Buescher has declared for the Truck Series championship race in 2012. By the way, polesitter Danica Patrick finished 38th after spinning out early drafting with teammate Whitt.

James Buescher came from outside the top 10 through this wreck to score his first career Nationwide Series victory on Saturday.

For *James Buescher*, Friday and Saturday could not have been more different days. Driving the No. 31 Truck that he came so close to winning a title with a year ago, he, along with teammates Nelson Piquet, Jr. and Miguel Paludo were the class of the field, leading well over half the race before falling victim to a myriad of crashes that ended the event. Saturday was a far different story. The No. 30 car was, at best a mid-pack entry throughout 300 miles, spending much of the day simply struggling to land a top 15. But this time, when the wrecks came, Buescher got to play the role of John King and take his first career NASCAR win at the world’s center of racing. It’s no secret that Buescher has benefited from his status as the son-in-law of team owner Steve Turner. However, between showing real muscle in his truck and this win, Buescher has demonstrated considerable development as a driver over the course of this Speedweeks.

*Richard Childress Racing’s* return to the Nationwide Series they used to dominate showed that old habits die hard. Right out of the box, *Elliott Sadler* and *Austin Dillon* both scored top-5 finishes to start their 2012 campaigns, with Sadler proving to be one of the strongest cars in the field all afternoon long. With Sadler having come as close as he did to winning the Nationwide crown a season ago and Dillon coming off a Truck Series title of his own, it’s not too early or unreasonable to say that this year’s title chase may well go through RCR’s shop.

*Tayler Malsam’s* return to NASCAR racing after losing his Truck ride with Randy Moss Motorsports early last year went about as well as he could hope for. Carrying the flag for the four-car Tri-Star Motorsports operation, Malsam was the only one of the organization’s three full-time race teams to bring his car home in one piece, scoring a career-best sixth-place result for his troubles.

Here are some other notable, underdog results worthy of some shout-outs. *Benny Gordon* equaled his career-best finish of 12th after narrowly making the field; *Danny Efland* scored his career best in 13th despite having only one and a half set of tires in his pits for the 300-mile race; and *Josh Wise* finished 14th with no sponsorship after his three teammate cars at Key Motorsports all failed to qualify for this event on Friday.

*Jason Bowles’* first full-time campaign in the Nationwide Series got off to a short and sour start, with the No. 81 car parked after only 28 laps with a blown engine. Motor problems also ended up plaguing a number of Nationwide Series regulars past and present. *Joey Gase’s* day ended 12 laps short of the finish when the No. 39 Ford saw its power plant expire, and though J.J. Yeley is a full-time Cup driver for 2012, it is worth noting that what will currently be the last Nationwide Series race for longtime owner *Jay Robinson* ended in a puff of smoke after only 43 circuits.

*Mike Bliss* absolutely shocked the field in the early going when teamed up with Joe Nemechek, shooting out of nowhere to lead six laps with his unsponsored No. 44 Chevrolet and having the horses to keep up with the fastest lead tandems in the field. The powerhouse duo ended up being kryptonite for Bliss when it counted, though; on lap 60, Bliss had to check up approaching turn 4 on the backstretch, leaving Nemechek to plow into the back of Bliss’ Chevrolet. The damage was too much for the No. 44 team to repair, leaving them a disappointing 39th.

*Jeremy Clements* had some horses under the hood as well this Saturday, as both he and Wise were able to crack the top 10 in the draft before mechanical issues forced an extended pit stop for the No. 51 team. Clements was able to avoid crash damage, but ended the day five laps off the pace in 25th.

Defending NNS champion *Ricky Stenhouse, Jr.* finished 19th after being collected in the final crash with victory in sight. Not bad in the grand scheme of things, but the Roush Fenway organization has to consider that a disappointing effort, especially with how strong the Fords have run during Speedweeks.

*Sam Hornish, Jr.* looked less like the Phoenix race winner of last fall and more like the greenhorn open-wheeler he was early in his Cup career when he triggered a massive crash on lap 113, coming down on David Ragan’s nose after scraping the wall in turn 4. The damage wasn’t terrible, as his No. 12 team finished 20th but that’s still not an inspiring start for Penske Racing’s lone title contender.

*JR Motorsports* may have had *Cole Whitt* finish fourth, but it came with a price. All three of the team’s cars suffered some form of crash damage over the course of 300 miles. And Whitt will have to deal with the wrath of the team’s new flagship driver in *Danica Patrick*, who was absolutely irate with the Californian after being bumped entering turn 4 and sent into a spin that destroyed the front end of her car. Danica finished a distant 38th after winning the pole… and based on her tirade on the radio after the incident, there may well be more tension in the shop this week than they’d like to admit.

23 wrecked cars in the final 17 laps of competition. At a minimum, that’s over *$2.5 million in damage for Nationwide Series teams to account for*. And that’s not even counting crashes earlier in the race. Speaking to Jeremy Clements Friday, the owner/driver noted that an acute shortage of equipment in the Nationwide Series “is always in your mind when you race. We have five cars now (the team ran the entire schedule in 2011 with only three) but we can’t afford to just go out there and wreck them.”

That storyline holds true for a ton of teams in the garage that were not as lucky to avoid crash damage this weekend. And there is no “magic button” solution to the issue. The wreck coming to the checkers was the result of a Cup regular in Joey Logano throwing a banzai block indicative of a driver that doesn’t have repairs to worry about. The crash on lap 113 was triggered by driver error on Sam Hornish, Jr.’s part, getting out of line on the high side in turn 4 and then swiping across David Ragan’s nose. The “Big One” before that was an accordion effect, with Benny Gordon being the catalyst that slammed both *Kenny Wallace* and *Justin Allgaier* into the fence after Trevor Bayne nearly lost it up front.

The Cup guys weren’t all to blame. Nor was inexperience. And it certainly wasn’t plate racing’s fault, either. Let’s not forget that the ARCA Series managed to run their season opener without a single “Big One.”

*Underdog Performer of the Race: Timmy Hill.* This time a year ago, eventual NNS Rookie of the Year Timmy Hill was watching this race, too young at the time to tackle the high banks of Daytona. Now, with a sponsor on board, Hill returned to the superspeedway, avoided the carnage, stayed on the lead lap with or without the crashes… and ended the day with a career-best seventh-place finish. There’s no doubting that Hill improved by leaps and bounds after being thrown into the deep end with Rick Ware Racing last year, and with the addition of teammate Blake Koch (who finished a solid 17th) RWR is poised to make noise they typically haven’t at this level of racing.

• James Buescher’s win marks the first time a non-Cup driver has won the season opener at Daytona since Randy LaJoie took the checkers in 2001, driving Ed Evans’ No. 7 Kleenex Pontiac.
• Not to rub salt in wounds… but there’s a lot of drivers that were on the track Saturday that could have saved the car Danica Patrick ended up crashing in turn 4. Cole Whitt is certainly not as guilty as the GoDaddy girl’s wrath would suggest.
• Anybody arguing that the return to pack racing is bad because it causes the “Big One” needs to silently fade away for awhile after Saturday’s race. It’s a form of racing that’s boring to watch, takes control out of drivers’ hands and has the same net destructive potential as the dreaded packs.
• One story that for some odd reason stayed silent for all of Speedweeks in the Nationwide Series garage was an offseason move by NASCAR that increased entry fees for NNS competitors by some 25% over 2011. Over the course of a 33-race schedule, that’s going to translate to almost $10,000 in additional costs for NNS teams even before they take to the race track. “Everything NASCAR’s doing…there’s no sponsors, teams are falling out, and then they raise the f***ing price on entry fees and for people to get in and everything else. What are they thinking?” exclaimed one driver when asked about the change. “It infuriates me. It infuriates a lot of people. [But] as long as they’ve [NASCAR] got Hendrick, Roush, Childress, they’ll keep doing it.” Here’s to 2012, ladies and gents.