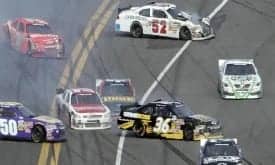 _”It’s really fun. I’m really excited to get out there and draft a little bit,” Johanna Long is telling me on her hauler, when suddenly she gets distracted. “Y’all go away! Gosh!” she yells at her crewmates and PR rep Haley Long. “She gets nervous during interviews,” Haley jokes back._

_On a weekend that Danica-mania and all its collected polish was the talk of Daytona International Speedway, former Truck Series regular Long is the polar opposite; bubbly, excited, exuberant. She’s landed one of the better rides the series has to offer, and that opportunity was not lost on her._

Bryan Davis Keith, Frontstretch.com: *How did this deal come about? This is a really good ride.*

Despite her excitement to get in the pack and draft, Johanna Long’s debut with ML Motorsports ended with crash damage.

Keith: *How much pressure comes with this deal? The last four drivers in this car have all scored top 10s. This is arguably the best single-car team out there right now.*

Long: Exactly. We looked at that. We know they have awesome stuff, they have ECR engines, RCR and KHI cars, we know it’s good stuff. Last year, I didn’t know how many races I was going to get to run this year, be it the Truck Series or wherever. Now, knowing that I get Nationwide Series races and 21 at that, it means a lot to me.

Keith: *The resources are better this year…*

Long: Our trucks were really good last year, we had stuff from KBM. But we have a lot of resources here. It’s really exciting. This isn’t my family-owned team, this is a big step up for me in my career.

Keith: *Lots of talk about having one car, about guys racing conservative. Does that enter your mind?*

Long: I’m going to race hard. We’re not going to put ourselves in bad situations, and we’ll try to be there at the end. We’re not here to be conservative. We’re going to get to the front as fast as we can and as hard as we can.

Keith: *You mentioned that you and Mary Louise [Miller] “clicked.” Being both women in racing, how much does that weigh in to what you do at the track? Obviously you’re here to win races, but does your status ever enter into your mind?*

Long: It means a lot, and it means a lot with her. Me, I was able to find something with her and that [more importantly] clicked with her team. It’s something that I was looking for, and they were too. This deal makes the whole team excited, and it makes my job easier when the whole team is excited, not just a couple of people.

Keith: *The team is based in Indiana; that’s definitely off the beaten trail for big time stock car racing. That and the fact that you are running a partial schedule, what kind of challenges does that pose to you as a development driver?*

Long: [It’s hard to view it as a challenge]. It’s so amazing, how really good they run, being in Indiana. They run so good, their shop is really big, and how they do things up there is really cool. I had never really thought of any NASCAR team outside of North Carolina, but it’s an awesome thing for their team. They’re all from Warsaw, they all came from Warsaw, and it’s a big community thing for them. Going up there a bunch of times, it’s really neat.

Keith: *There’s another woman in the field in the Nationwide Series that has 75% of the infield crowded around her hauler right now. What type of impact does Danica-mania have on you?*

Long: I think it’s a really good thing for the sport. I’m honored that I get to be a part of it. I’m really excited to get to race with her… and all the other guys out there.

Keith: *Where do you find support in the garage, being a single-car team?*

Long: Well coming down here, getting ready to practice, everyone already has their drafting partners set up before practice. I had to take what I could get. It was the toughest thing for me. Not only because I don’t have a teammate, but I don’t know that many people in the garage. That was probably the toughest thing so far. Tomorrow, they’re not going to have a choice. Hopefully it will be more pack racing tomorrow anyways, so I hope to find someone that I can stick together with.

Keith: *Is there anything special you can do to prep for seeing a lot of race tracks for the first time?*

Long: Well, I visit the shop. I like to talk to the crew chief. I try to talk to him a lot, keep up with what’s going on [at the shop]. As for the tracks, I do the best I can to study them, look at tape, go to the gym to work on my fitness, stuff like that.

Keith: *Talk about the fitness considerations of this move. 300-mile races are a step up from the Trucks.*

Keith: *Being a Florida native, Daytona is important to everyone, but it’s your home state. What do you see Daytona as more: is it a hometown race or is it Daytona?*

Long: It’s a race at Daytona. I mean, my family’s here and that’s really exciting. [But] I never thought I would be here racing at Daytona in a Nationwide car.

Keith: *21 races on the books. Throw the stat sheet out the window, what does a successful 2012 look like for you?*

Keith: *Any one track you’ve got circled?*

Long: Oh, yeah. I can’t wait to get to Bristol.