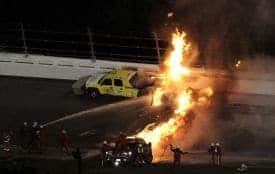 *ONE: Daytona 500 Weekend Needs to Be Pushed Back*

Look, NASCAR is not at fault for what Mother Nature turned into a debacle of a race weekend, one that went into Tuesday. But just as having the Super Bowl of stock car racing delayed for weather was a radical departure from the norm, so was the Monday after the 500 not being the President’s Day holiday.

Fire was not the biggest impediment to a successful Daytona 500. It was the date.

In the end, a Monday night is a Monday night. Being on President’s Day would not have radically altered the TV ratings NASCAR scored for the Monday night broadcast (though the ratings were down from 2011, the total number of viewers was reported to be the second highest in Daytona 500 history). But the flexibility of having the race’s rain day as a holiday would hold innumerable benefits. Chances are, a significant number of the fans that had to go home after Sunday’s rainout (the surprisingly large crowd that stayed through Monday night deserves a well-earned round of applause) would have been able to stick around.

It would also have been easier to deal with the local’s considerations in the surrounding Daytona Beach community. When asked what kind of challenges rescheduling a race for Monday would pose, DIS president Joie Chitwood III noted that one of their biggest issues was being unable to use Daytona Beach’s fleet of school buses to shuttle fans from parking lots to the track because Monday was a school day. Was that mere conjecture? Sure. But it seems rather foolish to just give up a built-in holiday for a rain date. Especially when the entire schedule change was brought about to avoid competing with the Super Bowl… a threat that never came to fruition.

Shame the same couldn’t be said for a rainout.

*TWO: This Coast-to-Coast Schedule is a Logistical Nightmare*

This topic was touched on this past weekend in the “Nationwide Series Breakdown”:https://frontstretch.com/bkeith/37344/ feature, but it bears mentioning again given the ridiculously short turnaround that the Sprint Cup Series’ race teams have to get back to their home shops and then to Phoenix for the next race. Nationwide Series teams based in the Carolinas estimated they would be leaving in the wee hours of Tuesday morning to make it to PIR in time for hauler parking at 10 AM on Thursday.

Cup haulers are due to park out west at 5 AM the following morning. Do the math, and at best Cup haulers would have until very early in the AM on Wednesday to get unloaded, reloaded, and back on the road. All of this after the most time-intensive weekend of the entire Cup schedule, one that has had teams away from the shop for, depending on whether or not they raced in the Shootout, up to two weeks. Couple that with a race that is notorious for tearing up equipment, and there’s an ugly reality; roughly 30 hours to get back from Daytona, unload, reload and haul out west.

For Hendrick Motorsports and teams that have hundreds of employees, no big deal. But what about teams like Kurt Busch’s or Joe Nemechek’s that don’t have armies working 24 hours a day in their race shops? What about teams that had just about everyone they employ down in Daytona making that race happen? The thought of having to cram race and hauler prep into a span of likely 24 hours once the trucks make it back to North Carolina is almost unfathomable.

NASCAR’s Cup Series needs to be going out west. That’s understandable. But transitioning from a destructive, long-term event in Florida only to head to Arizona next makes no sense, be it geographic or economic. Even if a return to Rockingham for race #2 isn’t an option, a return to the Southeast darn well should be.

Let’s get one something straight here; given the near-Armageddon like conditions that surrounded this year’s Daytona 500, NASCAR didn’t do half-bad orchestrating the weekend. Mike Helton was timely in making appearances and speaking to race fans directly about ongoing situations, be it the weather or the jet dryer explosion that delayed the 500 by two hours in the middle of the night. For once, NASCAR came up with defined plans in a timely manner with regard to restarting a rained out event, and they stuck with it. The surprising clarity with which NASCAR moved forward and Joie Chitwood III’s open press conference regarding the decision to delay the 500 for the first time in history for once showed signs of the sanctioning body actually communicating.

Brian France, typically in front of the microphone at least once during the month of February worked behind the scenes this year.

Sadly, the same could not be said for the sport’s CEO, Brian France. Rather than making an appearance, shaking hands and taking questions from the assembled media, France (or likely one of his interns) penned an open letter to NASCAR fans, painting a rosy picture of the sport by saying as little as possible. On the one hand, it’s a move that makes perfect sense in terms of PR. Brian France has repeatedly proven awkward in terms of public speaking (anyone that doubts that should watch tape of the driver’s meeting and see just how uncomfortable he looked simply standing on the podium and applauding), with a tendency to make the company he represents look utterly foolish (who could forget his disbelief that fans hate the Chase?)

But while an open letter sent electronically is an easy out for a PR representative, it’s also the same reason that for all the good Helton and Chitwood did making appearances and answering questions over the course of 48 hours in Daytona Beach, there’s no reason whatsoever to feel comfortable about the sanctioning body suddenly learning how to open up and speak out (besides how they conveniently fail to discuss things such as the increase of license or entry fees for this year).

How can anyone feel comfortable when the sport’s highest ranking figure has to be hidden behind mass emails on the sport’s biggest stage?

*FOUR: FOX Has The Opposite Problem*

Darrell Waltrip has for years been a self-serving loudmouth pain in the ass to the masses of NASCAR fans out there that don’t find incessant hours of Waltrip entertaining or informative. Danica Patrick has for years, be it in IndyCar or the Nationwide Series, set records for being the most celebrated, acclaimed and admired driver to have a resume consisting of a single fuel mileage win in open wheel and a handful of top 10s in stock car racing. Combined, the two have proved that mixing poisons just makes a bigger mess.

So why was it necessary to show the wounded No. 10 car running alone on the race track three times over the course of the evening to discuss the importance of learning? Trevor Bayne didn’t get that quantity of air time when he came back on track with his wounded car. Joe Nemechek didn’t get any sort of mention at all, except for once, late in the race when the pack came barreling by.

Why see the No. 10 car being repaired every 10 minutes when the Lap 2 wreck that took out the green car also took out Kurt Busch (definitely didn’t see the same meticulous analysis of repairs given to the No. 51). Why was it necessary to have a post-race interview with the freaking 38th-place finisher?! If Michael McDowell had only been so lucky, he’d have been racing full-time years ago.

And how could anybody in their right mind sit there with a straight face and talk about how Jimmie Johnson had clearly learned from Danica Patrick to remove his hands from the steering wheel during a hard wreck? (Well, to be fair, Darrell’s arguably not in his right mind; he seems to think he’s a good broadcaster.) Dario Franchitti, Sam Hornish, Jr., Jacques Villeneuve, Tony Stewart and the legions of other open wheelers that have been in NASCAR for a long time must have just been lucky in their open-wheel careers to avoid broken wrists.

Darrell Waltrip and FOX’s fixation with the driver of the No. 10 goes beyond even what was seen during ESPN’s coverage of her Nationwide debut two years ago, to the level that SPEED demonstrated during their laughable excuse for coverage of Danica’s ARCA race at Daytona: biased, exaggerated, unrelenting adoration. Coupled with the omissions from Monday’s broadcast (Robby Gordon was not mentioned once over the course of nearly six hours on the air after blowing the same engine he struggled to make the 500 with) and it’s abundantly clear FOX wasn’t just telling the big story.

They were playing favorites. FOX Sports needs an ombudsman, fast.

*FIVE: The One On-Track Conclusion to Take Away from Speedweeks*

Notice how all the points so far haven’t really centered on what happened on the track? There’s a reason for that… there was nothing to learn. Wrecks scarred every single race that took the green at Daytona over the course of Speedweeks (every NASCAR-sanctioned one, anyway). The Truck Series race was won by an unsponsored late model racer that called Daytona his “third career feature win.” The Nationwide Series race was won by a Truck Series regular that was running 11th a quarter mile from the finish. And the Cup race nearly got snagged by an upstart Tommy Baldwin Racing outfit whose owner was concerned about being able to take parts off his Daytona 500 car simply to race at Phoenix this coming weekend.

Daytona has for decades been a home of unpredictable plate racing, but 2012 answered fewer questions than normal about what to expect for the long season ahead. Sans the ability of the Fords to keep their engines cool, there was nothing concrete to take away as indicators of who’s the favorite to unseat Smoke.

The only firm talking point? Thank ESPN’s Ryan McGee for perhaps the tweet of the weekend that didn’t revolve around jet dryers or the Orange Cone:

*@RyanMcGeeESPN: “When @mattkenseth retires we’re going to look at his resume and say ‘Damn, he did all that?’” #daytona500*

Kenseth, who to this day is still characterized by a commercial that depicted him as a robot, has quietly become a driver that realistically could be staking a claim for the Hall of Fame. He beat out Dale Earnhardt, Jr. for Rookie of the Year in a battle he wasn’t supposed to win. He’s an IROC champion. Monday (or was it Tuesday?) marked his second Daytona 500 victory. And he won the 2003 Cup title in such convincing fashion that NASCAR changed the points system. There’s not a whole lot left for the Wisconsin native to accomplish in this sport.