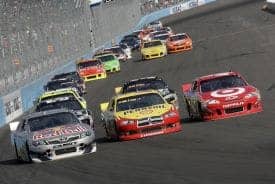 About the only thing missing from a mesmerizing 2012 Daytona 500 was a plague of locusts, but given the sheer insanity that transpired this past weekend I wouldn’t have been surprised to see one descend from above. Now though, with the hoopla of the Great American race finally consigned to the annals of NASCAR history, we get down to the serious business this weekend.

But wait, you say. Isn’t the Daytona 500 – the sport’s biggest race – the very definition of serious business? Well yeah, of course it’s serious, but it’s the form of the drivers and teams over the next two race weekends at Phoenix and Las Vegas Motor Speedway that will give us a true indicator as to who is going to make a sustained run in 2012 and ultimately who’ll challenge for the title.

First up it’s a trip to the desert, where the Cup Series began racing back in 1988. The inaugural race was won by the late, great Alan Kulwicki, and the list of other winners since reads like a who’s who of NASCAR: Dale Earnhardt, Rusty Wallace, Bill Elliott, Davey Allison, Mark Martin, Dale Jarrett, Ricky Rudd, Tony Stewart, Dale Earnhardt Jr., Matt Kenseth and Jimmie Johnson to name but some.

Much changed, however, at Phoenix with the significant reconfiguration and repaving effort that took place between the two 2011 Cup races. Such has been the change in the track surface and layout that old notes have been rendered obsolete with the miniscule sample size of just one race to go on, a race won by Kasey Kahne for the now defunct Red Bull Racing team.

Sunday’s race at Phoenix will take on new importance this year, as teams have had only one race to build a notebook on the reconfigured oval.

“Getting that win was a huge boost for our team last year,” reflected Kahne on his solitary trip to Victory Lane in 2011. “I think the track was probably the best I can remember a brand-new race surface being in the first race. It started slippery and got better as the rubber built up. We made the adjustments we needed to put ourselves up front at the end.”

Adjustments will be key this weekend, and that’s something the head wrenches will enjoy, given their relative lack of control at restrictor plate tracks like Daytona. It’s a point reflected in Kahne’s winning crew chief Kenny Francis’ post race comments: “Once we started the race, we knew the track was going to be a lot different than how we practiced. We knew it was going to change through the day; we just didn’t know what it was going to do. We were fortunate to be able to adjust correctly and get our car pretty good.”

Not every driver is a fan of Phoenix’s new surface. Take a look at the post-race press conference comments from Tony Stewart, for example, who not only finished third but also lead 160 of the 312 laps – the most on the day. “I still wouldn’t have changed the shape the way they did. I guess the computers are smarter than the drivers these days,” said Stewart “But I thought it was a good race. I didn’t get to see all of it. From where we’re at, we get to see the part we’re involved in.”

Phoenix, then, is a key racetrack in the NASCAR schedule occupying two critical slots: “the race after the Daytona 500” _and_ the penultimate race of the Chase and the entire season. Sunday’s race notes, especially for the championship hopefuls, will be critical come crunch time in the Chase.

But before thoughts can turn to putting together a run to win it all in the final ten races, for the drivers that ran well on Monday night/Tuesday morning, the imperative will be keeping the momentum going; for those who started the season on a disappointing note, the aim will to be to find some and start building some confidence. And for five-time himself, Jimmie Johnson, it’s even simpler: it’s about getting back to a positive points balance after the 25-point deduction levied by NASCAR following a failed pre-race inspection.

Three quick final points to finish with this week: I’ll start with the announcement on Thursday this week that Penske Racing will shift manufacturers from the beleaguered Dodge NASCAR program to Ford starting in 2013. What this means for Dodge is anyone’s guess, but perhaps a more vexing question is how Ford will integrate Penske into their burgeoning racing family led by the powerhouse Roush Fenway team. The patriarch of Penske Racing, Roger Penske, who celebrated his 75th birthday this week, will be a key factor in this transition. His calm assurance, veteran leadership and all-round racing savvy will for sure be called upon as his team readies for the switch all the while trying to ensure 2012 is a strong, successful leadership.

While I’m on the subject of Penske Racing, I want to quickly touch on everyone’s favorite Social Media expert: Brad Keselowski. As the inferno raged at Daytona, the driver of the blue deuce gave the racing world a totally unique take on just what exactly it’s like to be a race car driver when 200 gallons of jet fuel ignite in the middle of the race. And if by any chance you’re not following him by now, you really should be – not that he needs them after picking up 100,000+ new followers in a matter of hours.

And finally, even if it did take longer than expected it was genuinely great to see the return of NASCAR and the 54th running of the Great American Race. The NASCAR off-season might be the shortest in all professional sports, but for this petrol head, the circadian rhythm of the racing calendar quite simply can’t be beaten.