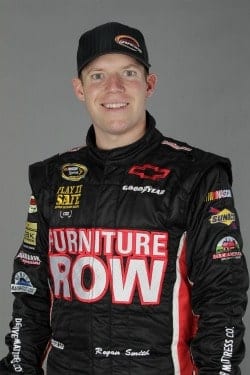 It’s a new season and I’m happy to be writing to you again in 2012. I’m excited to get started after an eventful offseason which included getting married and going on our honeymoon. As you may remember back in November, the location, which was St. Lucia, was a secret. I ended up slipping a little bit to Megan but it was a surprise for the most part and we had a great time!

To say that Speedweeks in Daytona were eventful would be an understatement. For starters, we had a new rules package to deal with, which included smaller air openings and no driver to driver communication. I think the changes worked well from my perspective. The mission to break up the tandems was accomplished. Some guys weren’t overly thrilled with eliminating the communication between drivers but I really never liked that to begin with so I was perfectly fine with that. It felt more like an old school speedway race than the last few times we were there.

The same luck that landed Regan Smith a hugely successful 2011 was absent at this year’s Speedweeks, but the team still expects big things for their new partners in 2012.

Then of course we had the rain delay, which gave us a lot of unexpected free time. I watched a movie on Sunday night, but for the most part, I was thinking about strategy and getting myself mentally and physically ready for the race. That is always a tough situation because you never know when you are going to race. I think the best thing NASCAR did was decide early on Monday that we were going to race at 7PM so I was able to get into my night race routine. For the rest of that afternoon, I played video games and kept my eye on the hockey news as it was the trade deadline. Since I wasn’t in my car, I played around on Twitter a bit as well! More on that in a little bit.

Delays were certainly the theme for the 2012 Daytona 500. I’m not quite sure exactly what happened with Juan. I think over the years, we have slowed down more when we see workers actually on the track. Maybe we let our guard down a little bit when the guys are actually in the vehicles. It certainly looked like Montoya had quite a bit of speed going at that point, but it’s tough to say as I never saw a really good shot of the accident. I’m sure we’ll look at the situation to determine if we need to re-address our procedures under caution.

During the red flag, I was mostly talking about race strategy and the guys I was around were all talking about how things were playing out. I know there was a group of them up towards the front with their cell phones and Twitter accounts. I wasn’t really into that. First off, I don’t carry a cell phone with me in the car. Second, the group I was hanging out with was more focused about what was happening on the race track rather than off of it.

It seems like NASCAR doesn’t have a problem with us having phones in our cars, but it is not something you will see from me. I think the fact that it is even a story is ridiculous. I’d rather focus on the racing when we’re out there.

I was happy to get the race re-started but our Furniture Row Racing Chevy certainly did not get the ending we hoped for. I haven’t seen replays yet, but something happened to McMurray and we were the next one in line with nowhere to go. I wish we weren’t that far back to begin with. On the prior restart, I tried to jump to the outside to gain some track position but nobody wanted to go and I got hung out to dry. It’s one of those situations where I was riding around for 100 laps and I got sick of being boxed in on the bottom and not being able to do anything. So it was my hope that someone else would have wanted to jump out and try to improve on their position as well but nobody wanted to go. Except for a few drivers, the outside was not working well at all. I wish it opened up so we had more spots to race on the track and had more options to pass. So we’ll have to figure out how to make the outside work next time.

In between all the racing, I had the opportunity to kick off the “Play it Safe” campaign we’re working on with CSX Transportation, the largest railroad in the Eastern U.S. There are a lot of deaths and injuries that happen around train tracks; incidents that we can prevent from happening, which is what this campaign is all about. If we can save one life, we will be successful and I think we can do even better than that. I got to ride on one of the trains and it was really neat to see the inner-workings of the locomotive and talk to the engineers. I saw just how much the engineer could see from their vantage point and they are impacted by accidents as much as everyone else involved.

I’m looking forward to quite a few of the upcoming races. I think the one we’re going to have to focus on more as a team will be Phoenix this weekend from the standpoint that we didn’t complete very many laps in the race last time there. So we have some unknowns going in with how the track changes. At the same time, we have a great partnership with RCR and we’ll be able to look at some of their notes and learn as much as we can from what they did and have a good race.

I’m excited for what 2012 has to offer and very happy that the fans will back supporting all of Furniture Row Racing. I’m looking forward to seeing all of you at the track this year!