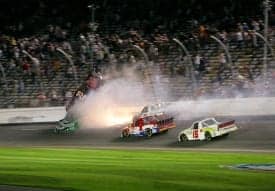 Well, readers, it’s time to hunker down and wait out another ridiculous break in the Truck Series schedule, but in the meantime, let’s take a look back at a weekend of racing at Daytona. If there’s one thing we learned, it’s that anything can happen –and it did, with one of the wildest finishes to any Truck race on record. But there was plenty more to take from the NextEra Energy Resources 250, as we look forward to 21 more races to determine the 2012 champion.

I know I’ve harped on NASCAR’s safety innovations before, but they continue to impress me. Just ask Miguel Paludo and Joey Coulter what they think of what the sanctioning body has done to help keep drivers safe week after week.

Paludo, who scored his first career pole started on the front row alongside Brazilian teammate Nelson Piquet, Jr. The pair, along with teammate James Buescher, schooled the field for the majority of the night. Then, with just 16 laps remaining, “Paludo got loose on the frontstretch and headed hard on into the inside SAFER barrier.”:http://www.nascar.com/video/post-race/highlights/120224/cwts-day-high-three/index.html?MostPopular The wreck was one of the hardest hits during Speedweeks, one that 20 years ago may have caused the driver serious injury. Instead? He emerged unscathed.

“It was the most amazing accident of my career and [I] am very happy to get away, showing the incredible safety of the car and the tracks of NASCAR,” Paludo said.

This awful wreck, involving Joey Coulter was one of several during the Truck Series race that tested the strength of NASCAR’s safety equipment.

But that crash wasn’t the only one that had me cringing as the laps wore down. On the final green-white-checkered attempt, chaos once again ensued as the field came to the white flag. “Coulter was hit from behind and sent end over end into the catchfence, hurtling into Turn 1 as the final caution of the night came out.”:http://www.nascar.com/video/post-race/final-laps/120224/cwts-day-high-final/index.html His truck was obliterated but thankfully, there were no severe injuries on the track or in the stands in a wreck that reminded some of the most disastrous in Truck Series history: the 2000, end-over-end barrel roll of Geoffrey Bodine.

“I’m fine, just really amazed that I’m not hurt. Thanks to everyone that provides safety equipment for me, including Sparco suits, Shock belts, Butler seats and Simpson. It was unbelievable,” Coulter said. “When I felt the back of the truck get airborne, I thought to myself, ‘this is going to be big.’ I had my eyes closed for most of it, so I’m not sure how big it was. I’m just extremely grateful and surprised that I didn’t get hurt.”

Now, Paludo and Coulter had the most severe accidents, but they’re far from the only two drivers that benefited from the safety features NASCAR requires in Friday night’s race. One thing is for sure, though; their wrecks, more than any other proved each innovation is worth every penny and minute of work it takes to get them properly installed.

*Who John King Is*

Anyone who has watched the Truck Series closely — and by that, I mean more than just race broadcasts — has heard of John King, but for the vast majority of people Friday night, the first time they really heard about the driver of the No. 7 Red Horse Racing Toyota came when he bumped Johnny Sauter too hard and sent him spinning into the outside wall.

At that point, NASCAR determined King was out in front of the field when the caution flew and gave him the top spot on the restart that followed – a position he used to charge to victory. But while the cleanup went on, Twitter was abuzz with the question: “Who is John King?” Well, aside from being a contender for the Rookie of the Year award this season, off the track King initially impressed everyone, including me with humbleness and humility. While excited about the win that followed, he understood the ramifications of the crash and took full responsibility.

So, that’s one aspect of his personality unveiled. But on-track, just who is this guy who headed off to Victory Lane in just his eighth series start? King isn’t one of those drivers who has raced since he was a young child. In fact, it was just six years ago when he started running Late Models on dirt, and by 2009, he had joined the Bill Elliott Driver Development Program where he ran late models on asphalt.

Fast forward to 2010, when King had the chance to run four events for SS Green Light Racing — he finished 15th in his debut at Bristol, a career best run until Daytona. Once again in 2011, he had the opportunity to make four starts but failed to qualify for Nashville in April. Beyond that, all three of his other races ended in DNFs, but that didn’t change his alignment with Red Horse Racing for the 2012 season. And while the organization is still searching for more backing, owner Tom DeLoach says they’re “millimeters away from a sponsorship deal,” and a visit to Victory Lane is just what the team needed to help solidify the funding to go the distance this season.

Regardless of how you feel about King winning the race last Friday night, he’s definitely someone to keep an eye on as the season goes on. After all, he’s got a veteran driver — Terry Cook — atop the spotter’s stand for each race that has plenty of experience and advice to share as the young driver matures.

Thursday afternoon, Turner Motorsports burst out of the gate showing the entire field they’re worth keeping an eye on when all three of their drivers — James Buescher, Miguel Paludo and Nelson Piquet, Jr. — ran inside the top 5 for the final practice session. Add in their sweep of the top 3 starting positions in qualifying, and you can only imagine how people started to raise their eyebrows.

But that wasn’t the end of their domination. When the green flag flew, Paludo led the first 20 laps and went on to hold the top spot for 56 of the first 83. In fact, a Turner Motorsports driver led the field for 81 laps on the night. It wasn’t until Paludo had his hard impact with the inside wall that his teammates weren’t able to get up front. However, even with their dominance in three-quarters of the race, none of the trio managed to finish inside the top 15 — Buescher finished 17th, last on the lead lap and Piquet, Jr. finished 22nd after getting caught up in the wreck on the second green-white-checkered attempt.

Despite falling off in the late stages of Friday night’s season-opener, it’s very clear that Turner Motorsports is a team to keep a close eye on in the coming weeks. While none of their three drivers has yet to visit Victory Lane, it’s only a matter of time before they do, and their competitors need to be looking over their shoulders because the organization has appeared to gain strength with the offseason additions of Paludo and Piquet.

There were plenty of things to take away from the Truck Series season-opener at Daytona, and despite the five-week break, there are still plenty of reasons to keep the series in mind as the weeks roll on. So in the meantime, enjoy some Nationwide and Cup Series racing, but don’t forget the series hits the track once again on March 31st at Martinsville. If you thought there were fireworks at Daytona, there’s sure to be even more at the 0.533-mile paperclip.