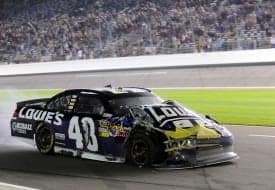 NASCAR handed down their penalties to the No. 48 team for unapproved C-pillars on their Chevy Wednesday, and a lot of folks were surprised by how harsh they were. Chad Knaus, crew chief for the team, was fined $100,000. He and car chief Ron Malec were suspended for six weeks and will be on NASCAR probation until May 9th. Jimmie Johnson will lose 25 driver points, meaning he heads to Phoenix with a total of -23, a whopping 70 points out of the lead (and 58 out of a Chase berth.) Car owner Jeff Gordon will also be docked 25 owner points. (Let’s clear up a little confusion here, since people are already asking me. Jeff Gordon, not Rick Hendrick is listed as the team owner for the No. 48 car. The 25-point penalty _does not,_ in any way, affect the driver points Gordon earns in the No. 24.)

After a horrible Speedweeks, with two wrecks and a 42nd-place finish in the Daytona 500 the season has gone from bad to worse for Jimmie Johnson with a 25-point penalty for technical violations.

What did Knaus do to bring down the wrath of NASCAR? Quoting from the original press release: The No. 48 car was found to be in violation of Sections 12-1 (actions detrimental to stock car racing); 12-4J (any determination by NASCAR officials that race equipment used in the event does not conform to NASCAR rules detailed in Section 20 of the rule book or has not been approved by NASCAR prior to the event); and 20-2.1E (if in the judgment of NASCAR officials, any part or component of the car not previously approved by NASCAR that has been installed or modified to enhance aerodynamic performance will not be permitted — unapproved car body modifications).

We all know that “actions detrimental to stock car racing” is pretty much a catch-all penalty that can cover anything from cussing to saying something negative about NASCAR they don’t care for. 12-4J is an odd rule to cite, because the car never took to the track. 20-2.1E is the most serious accusation and what, to my mind at least is at the heart of the matter and the smoking gun. Sure, some other cars have run afoul of the templates in NASCAR’s room of doom. Those cars were precluded from taking to the track until repairs were made, but no further penalties were issued. In NASCAR’s eyes, those were sins of inadvertency or negligence. The No. 48 car was different. It’s NASCAR’s determination (and remember, it’s their stick and ball) that this modification was no slip-up or accident. The alterations to the car were purposely made, done to enhance its performance and give Johnson an unfair advantage over the other drivers and their teams. The way the C-pillars were shaped would have directed much of the air flowing down the sides of the car away from the rear spoiler, reducing drag and thus increasing speed even with a restrictor plate engine. An aerodynamic engineer involved with the sport told me the advantage would have been sufficient enough that Johnson would have had to play with the throttle to keep it from being too obvious.

So are the penalties fair, too stiff, or not harsh enough? Let’s look at them. 100,000 dollars means nothing. Rick Hendrick will pay that amount without blinking an eye. He probably spends more than that on hospitality on a race weekend. Recall Carl Long got fined twice that for running an engine that was a teaspoon of displacement over the 358 cubic inch limit and offered no performance advantage. Despite finishing 42nd, Johnson and the No. 48 team’s winnings are listed at just over 360,000 dollars for the Daytona 500 due to the complex nature of NASCAR’s awards system.

In this digital age, Knaus’s six-week suspension isn’t as big a deal as it used to be. He’ll be able to keep working at the shop preparing cars for Johnson. Via cell phone, he’ll be able to remain in constant contact with any interim crew chief chosen to sub for him. He’ll be able to monitor Johnson’s radio transmissions online and may even be able to watch in-car views from the No. 48 to better analyze what’s going on. They’ve got a lot of depth on the bench at Hendrick Motorsports. Recall the last time Knaus was suspended Darian Grubb, then an HMS employee, filled in and Johnson won the Daytona 500.

The loss of 25 points is a somewhat bigger deal, even this early in the season. For all Hendrick’s money, you can’t buy points (not driver points, anyway). This deficit leaves Johnson with a serious hole to climb out of. Still, he has 25 races to do so. Even if he fails to make the cut, it’s all but unimaginable Johnson won’t win at least a couple races prior to the cutoff for the Chase and, as such, he’ll be eligible for one of the two Wild Card slots to get in. (In that scenario, it just makes things tougher for one of the smaller teams to make the Chase.)

Considering the above, my opinion is NASCAR went too easy on the No. 48 team and Knaus. I’m not buying this excuse the misshaped sheet metal was a mistake. None of the other Hendrick cars prepared for the Shootout or the 500 (along with their backups) had the same modification. When the team was told those parts had to be removed and replaced, they surely had a replacement set that conformed with the rules awfully quickly, didn’t they? Even Rick Hendrick’s complaint seems to condemn the team. Hendrick says the No. 48 car that was flagged for the infraction was the same one that the team raced at all four plate races. Does that mean the car was legal? No, it just means they got away with it last year. And if, in fact, the failed car was the same one used last fall at Talladega during the Chase then Knaus clearly knew it wasn’t compliant. You’ll remember the uproar when Knaus was heard telling Johnson if he were to win that race, he should back the car into the wall during the victory celebration. He knew if that car was taken to the R and D center, as all winning Cup cars are there was a risk it was going to be found illegal. That pretty much deflates the “but the car never even got out on the track” argument of one of my colleagues here at the Frontstretch. I think we can all agree that HMS didn’t haul that car down to Daytona to display it in the parking lot at some burger joint.

Chad Knaus may have been busted for cheating multiple times, but that hasn’t stopped team owner Rick Hendrick from offering his unconditional support.

Knaus and the entire Hendrick Motorsports team are habitual offenders when it comes to running afoul of NASCAR. Let’s make an important distinction here. In my personal opinion and that of most people in the sport, Rick Hendrick as an individual is a fine and principled man. He’s done countless charitable acts to help his employees, others in the sport and even strangers. He suffered through unimaginable loss following the team’s plane crash on Bull Mountain and did so with admirable Christian grace, his faith unshaken. But that’s Rick Hendrick as a man. The racing organization he owns has a corporate culture of cheating. It was true with Ray Evernham and the No. 24 team and it’s well-documented with Chad Knaus and the No. 48 bunch. Even when team members are caught red-handed cheating, there are no serious repercussions. Those employees are not terminated and even if they’re suspended, they continue to be paid. If they are fined, the boss pays the damages. HMS’ business philosophy is to win at any cost and apparently by any means necessary. In that sort of business environment, cheating is going to flourish. Forget that old fairy tale that cheaters never win unless you add a codicil: “Well, they don’t win anymore than five straight titles, anyway.”

The fact cars can be found to be outside the rules after a race and yet the driver keeps the win is one of the things casual fans and non-fans of the sport can’t come to grips with. It gives our sport a black eye and reduces stock car racing to the tier of professional wrestling in many folk’s opinions. And it’s time for NASCAR to crack down in a meaningful way. Money isn’t going to do it. Suspensions aren’t going to do it. Even points penalties (and I think at least a 50-point penalty was due in this case) probably won’t do it. If NASCAR is serious about policing the ranks, it’s time to drop the big one. If I had a vote, the penalty for the No. 48 team would have been a three-week suspension for the entire outfit. That means a serious loss of points and income but more importantly some sponsor (in this case, Lowe’s) isn’t going to have their rolling billboard out there for three straight races and that’s not going to make them happy. The loss of advertising exposure and the humiliation of being involved with a cheating scandal might even make them decide to terminate their sponsorship agreement, and in this economy that’s going to get everyone’s rapt attention. In addition, just to make sure the team got the message I’d warn them that each subsequent offense would earn stiffer penalties still and that any driver or team (and I am talking any team here, not just the No. 48) found guilty enough of a infraction sufficient to warrant a suspension would be ineligible to compete in the Chase that season. I think maybe that would be sufficient to put everyone on notice.

So what happens next? Hendrick Motorsports has announced they will appeal these penalties. Since there probably isn’t time for an appeal to be heard prior to Phoenix, Knaus will be atop the box, a track where Johnson has won four times. When the appeal board hears the case, they have four options. They can dismiss the penalty, reduce it, uphold it, or even increase the sanctions. Odds aren’t good the consequences will be dismissed, but fortunately for Knaus and the No. 48 team, I’m not a member of the board. I’d vote for that three-race team suspension.