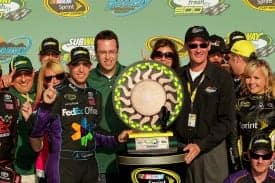 The Key Moment – Kevin Harvick was reeling in leader Denny Hamlin until, with just over a lap to go, Harvick’s No. 29 car sputtered low on fuel.

In a Nutshell – Denny Hamlin and Darian Grubb got served up a huge helping of redemption after their humiliations last season.

Dramatic Moment – Anytime Harvick and Kyle Busch are running in close quarters, fans are going to be on the edges of their seats given the duo’s checkered (and wreckered) history. When the pair were battling for the lead, there was no quarter given and none asked.

While I prefer the new track design to the old configuration at Phoenix, this oval is one of those tracks I still don’t think deserves two race dates. Rockingham and Darlington used to be the second and third races on the schedule, and it was a whole lot easier on the teams than two treks out west. Oh, and they featured a heck of a lot better racing as well…

Why exactly wouldn’t Tony Stewart’s car refire after he shut it off briefly to save fuel? The restart sequence isn’t that complex but the steps have to be done correctly and in order. Maybe someone might want to throw the EFI owner’s manual in the glove box of the No. 14 car. (D’OH! Grubb took it with him when he left.)

Despite Stewart’s problems, by and large the big story about the switchover to fuel injection is it hasn’t been a story. A seamless transition is the best possible outcome for NASCAR; it even works with this ethanol gas, which hasn’t proven to be the case with most motorcycles, ATVs, snowmobiles, small engines and classic cars. Despite those rosy commercials you see, adding ethanol to gas is one of the biggest boondoggles in politics. It takes more energy to produce than it yields.

I don’t pretend to be shocked by Roger Penske’s announcement this week that his teams will be switching to Fords next year. Throughout a long career as an owner, Penske has run Pontiacs, Fords and Dodges (And even AMCs back in the day). What did catch me off guard was the timing of the announcement. This early in the season, Penske is already a lame duck despite two cars capable of making the Chase. Certainly, Dodge isn’t going to want to give Penske any trick parts they might develop knowing he’d take that knowledge with him to Ford next year. The timing of the announcement is also awkward for Dodge. They are going to reveal the new Charger they plan to race in 2013 at Las Vegas next week, but probably won’t be able to announce any teams who will run the new Dodge next year.

An appeals judge this week ordered the drag strip at Fontana to be shut down until the track makes noise mitigation modifications to quiet things down for the track’s neighbors. (Yes, I’m with you. What idiot moves in around a racetrack and doesn’t expect some noise? It’s like the folks here in Chester County who build McMansions next to a pig farm and then find out pigs stink and they crap a lot.) You have to wonder if the ruling is going to have any implications for the upcoming Cup race.

I’ve come to the conclusion that about 300 miles is the ideal distance for a Cup event. The beginning and end of the race are the bread and middle portion is the bull crap. The more bread you have, the less crap you have to ingest.

The marketing types have gone over the line. Online ads meant to spur ticket sales at Dover have one (non)word in them, “Crashtastic.” No, come on, really? What’s the intended target audience and do I have to sit beside those types?

With all the uproar about Tweeter at Daytona, last week I got a few requests for my Tweeter handle this week. Simply put, I don’t have one. I don’t even have a frickin’ cell phone and I don’t want one. The only tweeting that goes on around Eyesore Acres is the newly returned robins out on the dying and muddy front lawn as they look for worms. But if you are in the area, I’m usually on channel 23 on the CB when I’m out in the GMC or Trans Am.

Well, it might have been a one in a million occurrence last week when Juan Pablo Montoya slammed into the jet-drying truck and set it ablaze, but NASCAR and the ISC have already leapt into action. Starting at Phoenix, rescue crews were wearing crash helmets and fire suits. They’re looking at adding roll cages and four-point belt systems to the rescue vehicles as well. I’m just waiting for the day NASCAR fines themselves for a rescue truck with unapproved C-pillars…

Marcos Ambrose was running third with 16 laps to go when his engine expired in a smoky fashion. He wound up 32nd, then took his team to task after the trip to the garage. “We are here trying to run for wins and run for championships,” he said. “To trip over ourselves like that, it just isn’t going to get it done.”

Clint Bowyer cut down not one but two tires in the first 25 laps of the race. He never recovered, winding up six laps down in 30th place.

Kasey Kahne won here at Phoenix last fall in the first race on the reconfigured track. This time, he hit the wall early and ended up in the garage for an extended period of time, finishing 34th. Like the disclaimers in the investment ads read, “Past performance is not necessarily indicative of future success.”

Stewart had a strong run going before the aforementioned restarting issue. That cost him two laps and left him 22nd.

Not only did Jamie McMurray get a big piece of the Paul Menard/AJ Allmendinger wreck, he eventually lost an engine as well. His second straight DNF of 2012 left him 37th.

Jeff Burton had another good run going, inside the top 10 but mechanical issues sent him to the garage. A valve was the likely culprit that caused an ugly 33rd-place result.

There was some real question as to whether Hamlin had enough gas to finish the race. He did, but just barely.

It was probably rough for Harvick to see a potential win slip through his hands, but the car re-fired well enough to allow him to hold onto a second-place finish, albeit seven seconds behind Hamlin. It could have been worse… Harvick might have been chasing Kyle Busch.

Stripped lug studs forced Jimmie Johnson to make three stops under a caution period, dropping him back to 24th in the running order. It took half the race, but he was able to charge back to a fourth-place finish..

53-year-old Mark Martin claimed the pole for the Phoenix race and drove on to a credible ninth-place finish. Don’t bury me ’cause I ain’t dead yet…

Hamlin takes the points lead by six points over second-place Greg Biffle. Hamlin and Biffle are the only two drivers with top-five finishes in both this season’s Cup points events.

Harvick moves up four positions to third in the standings. (Exactly where he finished in the points the last two seasons.) Former points leader Matt Kenseth fell to fourth, while Dale Earnhardt Jr. rounds out the top five in points.

Way down the list, Johnson is currently shown 37th in the standings. If the appeal board overturns the penalties against the No. 48 team, he’d move up to 20th.

By the way, if you’re already in an uproar over the points, you must have been potty-trained in your first month of life. Chill, folks, we’re two races into a VERY long season.

Overall Rating (On a scale of one to six beer cans with one being a stinker and a six-pack an instant classic) — We’ll give this one three cans of icy cold Colorado Kool-Aid. The race dragged for long stretches, but still featured some entertaining moments.

Next Up – The teams head north to Las Vegas (after a 4,088-mile side trip back to Mooresville to restock the haulers.)