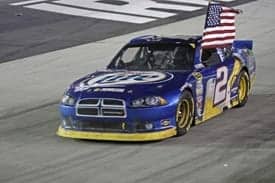 _Did you see all of the race action this weekend? Or, like lots of busy fans, did you miss a late-night adventure, a Friday controversy, or a juicy piece of news? If you did, you’ve come to the right place! Each week, The Frontstretch will break down the racing, series by series, to bring you the biggest stories that you need to watch during the week ahead. Let our experts help you get up to speed for the coming week no matter what series you might have missed, all in this week’s edition of Pace Laps!_

*NASCAR Sprint Cup Series: Dodge’s Future in NASCAR Suddenly Unclear* After the announcement that Penske Racing will switch manufacturers next year in favor of Ford, Dodge said that they are committed to remaining in NASCAR. However, selling themselves to a team could prove difficult for one big reason: engines. Because no other teams currently run the Dodge package, any team that switches will have to have an in-house engine program. While a large engine program could switch over, those teams already receive enough manufacturer support that the switch simply wouldn’t be worthwhile.

The only names being bandied around at this point have been Richard Petty Motorsports, which does not currently have an in-house engine program and is unlikely to add one at this juncture, even though Petty has a long history with Dodge, and Earnhardt-Ganassi Racing. EGR currently runs a joint engine program with Richard Childress Racing, a longtime Chevrolet loyalist, making a switch there unlikely unless that alliance is broken. While Dodge’s future is muddy, one thing is crystal clear: they will have to offer one heck of an incentive package to lure an established team to change in today’s environment. This development will bear watching for months to come. _-Amy Henderson_

Who will carry the flag for Dodge now that Penske Racing is moving to Ford for the 2012 season?

*Izod IndyCar Series: Danica Who?* Rubens Barrichello made it official this week that he will be joining KV Racing Technology in the IndyCar Series for the full 2012 season as teammate to Tony Kanaan and E.J. Viso. Barrichello, with 322 starts and 11 wins in Formula 1, has long been a fan favorite in the international series. Longtime friend and fellow Brazilian Kanaan invited Barrichello to test the next-generation IndyCar that will debut this season at Sebring over the offseason. Barrichello enjoyed the experience and with no ride lined up in F1, worked with KV Racing to secure sponsorship to make the ride possible.

Oval tracks will be the biggest challenge for Barrichello with his road racing background, but he is especially looking forward to the Indy 500, where he will compete as a rookie. IndyCar, who lost publicity darling Danica Patrick to NASCAR this year, is thrilled to have Barrichello join the ranks. To put it in Twitter perspective, Brad Keselowski made headlines for picking up some 80,000 new followers under the red flag at Daytona, and continued to gain popularity over the week to boast a current total of over 238,000. That number still pales in comparison to Danica Patrick and her 551,000+ followers. Barrichello, who has raced all over the world over the last 19 seasons in Formula 1, boasts 1,479,690 Twitter followers. _–Toni Montgomery_

*NASCAR Nationwide Series: Is This a Rerun?* It’s like they never even left. Two races in, and Richard Childress Racing has its two full-time drivers in Elliott Sadler and Austin Dillon sitting 1-2 in points, coming off a dominant performance at Phoenix that saw the team score three of the top 5 finishing positions and lead 133 of 200 laps, with Elliott Sadler returning to victory lane for the first time in over a decade.

And just like last year’s title fight was a Roush vs. KHI showdown, Roush Fenway Racing was the closest thing to a nemesis the Chevrolet outfit faced at Phoenix this weekend. Both defending champion Ricky Stenhouse Jr. and Trevor Bayne scored top 10 finishes and sit third and fifth in points. The question is…only two races in, is it too early to call the 2012 title chase a two-team battle?

All signs point to no. After a tension-filled weekend following the Cole Whitt/Danica Patrick debacle at Daytona, JR Motorsports made scarcely a whimper over the course of the Phoenix weekend. Turner Motorsports didn’t have a single one of its cars crack the top 10. And one has to go back as far as 16th in the running order to find a finisher driving for a team without at least some type of Cup affiliation

RCR and Roush Fenway Racing are light-years ahead of the Nationwide Series field right now. Those that enjoyed the Stenhouse/Sadler points race of a year ago are probably going to enjoy a repeat performance this year. This is going to be a rivalry to keep an eye on as the season heats up. _–Bryan Davis Keith_