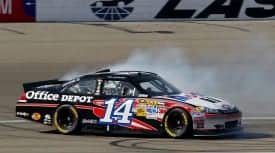 The Key Moment – Tony Stewart made a daring, three-wide pass on the apron to take the lead on the fifth restart. Stewart sprung forward while Brad Keselowski fell back, soon to be the victim of a broken fuel pump. After that, the No. 14 pilot held onto the lead with the tenacity of a bulldog.

In a Nutshell – This week, it’s a little redemption for Stewart and SHR after losing this race in the pits last year, their EFI snafu last week at Phoenix and the controversial crew chief move during the offseason.

Dramatic Moment – In the midst of a race that dragged on at times, Matt Kenseth and Jimmie Johnson put on a whale of a show, racing side-by-side, lap after lap.

More than likely, they’ll be talking about college basketball like everyone else. It’s tough when even NASCAR’s network partners seemed obsessed with roundball for the entire month of March. ESPN shoehorned the Nationwide Series race in between two basketball games almost as an afterthought.

Wow, typically Stewart (and Denny Hamlin) don’t really hit their stride until summer but both have already won a race. The other teams need to be concerned about the Nos. 14 and 11 cars this year.

Dodge’s unveiling of the new 2013 Charger Cup car was a bit awkward. Roger Penske, whose team helped develop the prototype, has already announced he’ll be switching to Fords next year. The only other Dodge entered at Las Vegas, that of Robby Gordon, failed to make the race. And the Penske defection has got to raise some serious questions. Penske’s R&D work proved crucial in the final version of what was unveiled at Las Vegas; meanwhile, he saw the 2013 Ford unveiled at Daytona last month and apparently decided the Fusion was a better car.

OK, admit it. How many of you forgot to reset your clocks and thus missed the first hour of the race?

You thought the rain was bad at Daytona the day of the 500? Did anyone else catch the Supercross race from Daytona Saturday evening? The rain was positively biblical and the resultant mud played hell with the racers.

Drivers say the darnedest things: Asked about his problems re-firing his car last week at Phoenix with the new EFI system, Stewart replied, “I don’t know, that’s not my department.” Hmmm. Well, unless Stewart plans to have a riding mechanic sitting shotgun beside him during races, it might behoove him to learn how to properly refire an engine after shutting it down and what to try if it doesn’t instantly start up. I’d think that would be in his job description as a driver. As a team owner, you’d think he’d insist on knowing the procedure and how to troubleshoot the process if it didn’t work. Also as a team owner, I’d think he’d want his crew chief to know the procedure in case he forgot a step in the heat of battle. But that’s just me. Running Stewart’s team isn’t my department.

Drivers say the darnedest things, Part Deux: While commenting about his now famous text messages sent during the red flag period at Daytona, Keselowski (or @keselowski, I suppose) reiterated his opposition to texting while driving, especially in a racecar. He went on to note if you were texting even under caution you “might look up and run into the car behind you.” Well, running into the car behind you would be a pretty neat trick. (For all my loyal readers here in Pennsylvania, texting while driving became a primary offense as of last Thursday. As a motorcyclist, I’m so happy about that I’m planning to sit on the curb down the street from the local high school today watching the cops hand out those tickets like Halloween candy while baffled students text their friends, “OMG. Getting pulled O4 4 texting while driving. WTF?” As a reminder, don’t text and drive, don’t talk on your cell phone and drive and don’t run over motorcyclists. We have folks who love us, too.

I’ve been doing this awhile so I’m used to getting emails asking me racing questions. (Sorry, I can’t respond to them all. The volume is just too large.) But every once in awhile I get asked an off the wall question like one this week from Mallory. She seems like a nice young lady, so Mallory, the car in the new KFC commercial is a ’70 Dodge Charger RT in R5 Bright Red. The song is “Time To Get Down” by the O’Jays, circa early ’70s.

What exactly happened after Kurt Busch exited the infield care center following his late race crash? While some folks are downplaying the incident as relatively minor, others say Busch tossed a water bottle at a media member sent there to ask if he was OK after a hard crash. Others say Busch referred to a female media member as a “stupid insert the most incredibly offensive word you can call a female that begins with ‘C.'” Is there going to be more fallout from the incident later this week?

BK Racing wound up with a pair of flame-broiled Toyota engines Sunday. You want fries with that? So much for the value menu connecting rods. Landon Cassill and Travis Kvapil wound up 36th and 39th, respectively.

Kenseth was third on the final restart but got to battling with his two Roush Fenway teammates in those waning laps and got the short end of the deal, sliding sideways into the wall. Kenseth went on to finish 22nd, the final car on the lead lap.

What didn’t happen to Kurt Busch on Sunday? The team had an air gun break on a stop, Busch got a flat out on the track and wrecked, then another on lap 255 to finish his day off. He wound up with a 35th-place result and an ugly set of post-race rumors.

Things didn’t go much better for the other Busch brother, Kyle. The No. 18 seemed curiously lacking in the speed department much of the day after having to go to a backup car because Busch wrecked his primary car in practice Saturday. Busch then got caught up in the oil spewing from Kvapil’s wounded mount and hit the wall hard. With eight laps to go, he wrecked again to finish a lap off the pace in 23rd. So much for homefield advantage…

A 10th-place finish might not seem too awful, but as dominant as the No. 88 car was early in the race Dale Earnhardt Jr. clearly wasn’t too pleased after it. What’s troubling is once again Earnhardt and Letarte failed to communicate, with Junior not providing good feedback on what the car was doing and Letarte thus unable to make the proper adjustments to keep it up front.

Keselowski’s team decided to gamble on fuel mileage and rolled snake eyes. He was running second when he ran out of fuel. The No. 2 car ended up 32nd. Editor’s Note: Following the race, the team claimed the fuel pump simply broke.

Kasey Kahne had a solid run going, but a run-in with Kenseth late in the race dropped him back to a 19th-place finish in yet another wrecked racecar. I sure hope Farmer’s Insurance has an accident forgiveness clause.

After dominating the race at Vegas, Stewart almost threw the win away getting loose and nearly driving into the side of Aric Almirola’s car as he lapped him.

Johnson had a tough row to hoe Sunday after wrecking his car in final practice, requiring him to start at the rear of the field. For the record, he made up 39 spots during the race en route to second place. Maybe his luck will hold up for Tuesday’s appeal hearing?

Carl Edwards‘ car was absolutely terrible for the first half of the race, but he emerged from the fray to snag a fifth-place finish by the checkers. It’s taking bad days and making them good that wins titles.

Trevor Bayne was nearly invisible for most of the race but still wound up with a solid, ninth-place finish.

Jeff Gordon described his car as “undriveable” for much of the race at Vegas. But a 12th-place finish limited the damage to his title hopes after a bad day.

Biffle takes over the point lead. Former point leader Hamlin falls two spots to third in the standings, 12 markers out of the top spot. Kevin Harvick is sandwiched between them, 10 points behind Biffle.

Earnhardt Jr. is currently fourth in the standings, 18 points behind Biffle. Kenseth and Edwards are tied for fifth with 102 points apiece.

Stewart, Martin Truex Jr., Joey Logano and Mark Martin round out the top 10 in that order.

Johnson has worked his way up to 23rd in the standings. If his points penalty is reversed this week, he’ll move up to 13th. It’s way too early to panic about the points (or even discuss them at length) but some of the drivers who’ve dug themselves into holes and have to climb out (you can’t dig your way out of a hole, you’d only make it deeper) include: Gordon (17th), Keselowski (21st), Juan Problem Montoya (24th), McMurray (25th), Kahne (26th) and Kurt Busch (29th).

Overall Rating (On a scale of one to six beer cans, with one being a stinker and a six-pack an instant classic) — I’ll give this one three cans of moderately chilled generic stuff. Just another McRace at one of those 1.5-mile cookie cutters.

Next Up – After two weeks in the mild, mild, West the Cup series returns to its spiritual heartland, the Southeast, to Thunder Valley for a battle at the Bristol bullring.