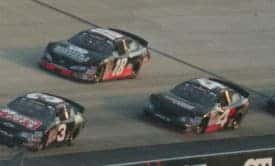 _The K&N East Series will be heading to Bristol Motor Speedway this weekend. In anticipation, Frontstretch writer Mike Neff spoke with Joe Gibbs Racing No. 18 crew chief Bryant Frazier to discuss some of the technical aspects of K&N cars and preparing for the trip to Thunder Valley._

Mike Neff: You’re getting ready for the K&N Season and a lot of our readers don’t really know what what makes up a K&N car and what are the differences between say an old Nationwide or Cup car and a K&N car?

Bryant Frazer will be on top of the pit box for the No. 18 in the K&N East Series season opener this weekend.

Mike Neff: Last week, when we talked to Brian Keselowski, he was talking about 110 and 105 inch wheelbase cars. What is the wheelbase on a K&N car?

*Bryant Frazier:* We can run both. We can run a 105 inch or a 110 inch wheelbase car. It gives us the opportunity for some of the old Nationwide or Cup cars to filter down through our series. NASCAR does such a great job there letting us have that to where we can get those cars and don’t have to go out and build brand new cars, so we’re able to run either length wheelbase.

Mike Neff: With the K&N rule package do you utilize bump stops, coil binding or either?

*Bryant Frazier:* We do coil binding pretty much. We are not allowed to use bump stops. Some of the tracks we go to it is pretty tough to do because we don’t have the loads you need to coil bind. Bristol and some of the bigger tracks that we are running this year, it makes it easier to get on the spring, although sometimes it is more challenging because you get on the spring so hard it is hard to get it where the car likes it.

Mike Neff:Does NASCAR put any regulations on spring sizes, number of coils or anything like that?

*Bryant Frazier:* Yes, we do have a number of coil count and a height restriction. We’re a little different in the K&N Series. Cup, Nationwide and Truck get an 8 and 3/4 inch spring where we get to run a 9 and a 1/2 inch spring. That gives us a little bit more range for the tracks we run so that we don’t have to go out and buy the $1,500 springs, we can maybe get away with buying the $700 or $800 springs. So that gives us a little bit better range on that kind of stuff.

Mike Neff: If $700 or $800 springs are considered economical. One more question. You’re getting ready to go to Bristol. The K&N Series has not run there before. Are you relying on your Cup and Nationwide guys at JGR for notes? Have you had experience there before or is this going to be a trial and error weekend?

*Bryant Frazier:* I’m definitely pulling from some of our notes here to go with some of the cars we have. I’ve been to Bristol quite a few times. I won both races there one year with Steve Grissom in the Busch Series.

So I definitely have a background to draw on for Bristol. However, it has changed since then. They repaved the track and it is a lot smoother than it used to be back when we won there. So we are pulling from some of the notes and going with some gut feelings. Darrell (Wallace, Jr.) has run a Late Model race there before so that is kind of helping us to. I think it is going to make for a really good race this weekend. Everyone just needs to have cool heads and be patient when they need to be patient and go race when we need to go race.

_The K&N Series will be starting their season at 6:15 this Saturday at the “World’s Fastest Half Mile” after the Nationwide Series race is completed. This is the first visit to the famous track by the series. Darrell Wallace, Jr. will be piloting the No. 18 Toyota for Joe Gibbs Racing with Frazier on the top of the pit box. If you are interested in seeing the future stars of NASCAR as they cut their teeth on the concrete high banks of Bristol, head to the mountains of eastern Tennessee this Saturday._