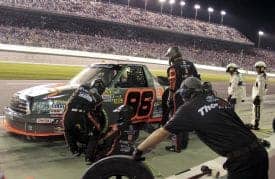 _Editors’ Note: We are excited to welcome Dakoda Armstrong to the Frontstretch Driver Diary lineup for 2012. Dakoda is one of 10 drivers competing for the Rookie of the Year championship in the Camping World Truck Series. He joined Matt Crafton and Johnny Sauter at ThorSport racing full time after making seven starts last season, including a career-best ninth at Kentucky in October. Just this season, new sponsor “EverFi,”:http://www.everfi.com/ “the leading education technology platform to teach, assess, and certify students in critical skills.” In his first entry, Dakoda talks about how his career in racing started, Peyton Manning and so much more._

I started racing when I was about six years old in go karts. My dad raced motocross growing up so that’s where I kinda got my start. I got into it for fun; we did really well and just moved up to quarter-midgets, bandoleros, anything I could get into at my age. I grew up in Indiana so open wheel is really big around there. I grew up racing a lot of dirt tracks–Bloomington, Warrensburg, Cocomo–and as far as pavement, there’s a track that’s actually a mile from my house.

I started racing sprint cars when I was 14–I did that for about two or three years–and then I started racing USAC, midgets and sprint cars. I really just followed the USAC schedule for a while. A lot of it is Indiana-based and I still go back and do races there and have fun. I did that for about a year and a half and then decided I wanted to go stock car racing. I got to do some Hooters Pro Cup for a little bit, Busch East and then I started ARCA and got signed with Penske. I did a little bit of those races full time and then I’m getting my start now with ThorSport and racing a truck, so I’m just trying to make the best of the opportunity.

Dakoda Armstrong saw a solid start to the season opener at Daytona go south in an early-race wreck. (Photo credit to ThorSport)

Looking back on Daytona, it wasn’t all that bad. The one thing we are taking from it is that we had a fast truck. We didn’t qualify where we thought we were going to; we were just dragging a little bit in practice. I guess we kinda just spooked ourselves and went the wrong way racing, but it was still fast. As far as in the race, compared to the truck I had at Talladega last year in one of the seven races we ran, it was just a way better piece as far as the way it sucked up and the way it could push people. We were just taking it slow and a wreck happened. I thought I could go right and then I went left and for whatever reason that flat part of the track off of turn four, a lot of trucks were losing it. I made an evasive maneuver in that area and spun. I didn’t have a whole lot of damage. Really the damage came when we lost a left rear getting ready to pull into the pits. It ended up definitely disappointing for the 98 team. I know my teammates were disappointed with them getting caught up in wrecks too. As a whole, ThorSport in general is looking forward to Martinsville and getting out and having another race.

The biggest thing I learned last year is the difference between the trucks and the stock cars. There was a lot of aero stuff that I learned even though I still have a lot to learn. I think we’re going to be better. The one thing is as a team that we’re trying to get more consistent and go out to get some top 5s and top 10s. That’s going to be our goal for these first few races and we’ll build from there. We’re just really looking forward to consistency and learning all I can. I think we’re getting a good hang of it and it’ll be fun.

We have our shop up in Sandusky, OH and when all the guys are up here, it’s great. I think that’s one thing that everyone prides themselves on is that they are up here and they don’t have to be in the racing capital with everyone else and we can still go out and run well. When we were first starting to hire, it was rough to get them up there, but once they get going, it’s all about team pride and it’s a fun time for sure.

I’ve been paying attention to the Jimmie Johnson / Chad Knaus thing a little bit. I see both sides of the story with the team saying they hadn’t been on the track yet, but I also see NASCAR’s side of it with trying to keep it fair and I applaud them for trying to keep everyone equal. I don’t really know which side is right or wrong. I guess the best thing is that I’m glad I’m not a part of it. We’ll see what happens, but they’re a good race team so I’m sure they’re still going to do well in the Cup Series.

There was talk of road course racing coming this year, and I was actually getting ready for it, but they said they just couldn’t get it finalized. I like it–I’ve done it a few races in ARCA and I practiced a lot for it. Even though it’s just two races, those two events can play a big part in the way the points play out. I think it should shake it up a little bit, and it’s fun to have something new like that coming. I like road course racing, and it should be fun.

You do approach road course racing different just because there are so many corners. On oval races, you’re really just focused on two turns–one / two and three / four–because we count them all as one deal. But in a road course race, it’s hard to set up your car perfectly for each corner, so you find the main ones and get those right. From there, you have to just drive and adjust your braking to help yourself through the other ones. It’s a lot of fun. The one thing is when I did my first one, it rained, so that wasn’t as fun since I hadn’t done a road course _and_ it was raining. But once we got the hang of it at New Jersey it was a lot of fun. I look forward to it and I think it would be a good time.

Moving off track a little, I’m from Indy, so it’s a bit of heartbreak to lose Peyton Manning. All of the Indy fans have been pretty disappointed not only with them letting go of him but a lot of the other players. I know they let go of Pierre Garcon to the Redskins. I see they just want to rebuild new, and I’m going to cheer for Peyton still. I’d like to see him end up on the Dolphins–I don’t know if it’s going to happen or not, but I’ve liked their team for a while. I don’t know how many years he has left in him, but it would be cool to see him help them get really good on his way out.

I try to pay attention to some of the March Madness stuff going on, but there’s so many teams I don’t know about. So I’m filling out my bracket and I’m not even sure who some of these guys are. I had to guess who was going to win and what kind of upsets there will be. I’m pulling for Indiana and if they can get two big wins, I think they can do it. They beat Kentucky once, so hopefully they can get lucky again. I did have Syracuse winning it all, but with the loss of their center, I don’t know if they’re going to be able to pull it off.

I just bought a brand new wheel for iRacing, and I’m trying to get back into that. All of the guys here talked me into starting back up again and it should be a good time. I’m still playing NASCAR The Game on XBox 360–that’s fun whenever I get a free chance. I’ve been bowling a lot lately, so that’s what I’ve been doing in my free time. The guys convinced me to go buy a ball and they taught me a little bit, so I’ve been getting decently good.

I’m up in Sandusky at ThorSport right now and have been all week. I’m headed back to Indy for a couple days for the weekend and we’re going to come back, test a little bit and work out some of the kinks in our new truck. We’re just looking forward to running well at Martinsville.