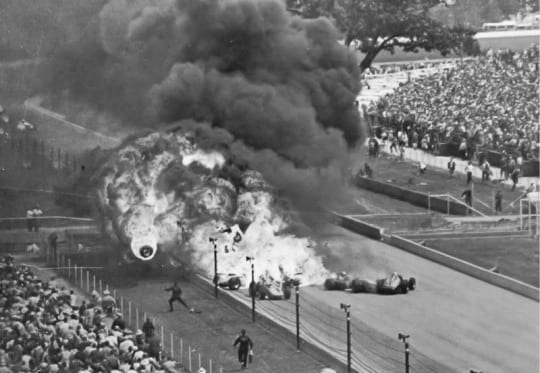 Rather than a question directed towards me, I want to start this week’s dissertation out with a rhetorical one from a friend of mine.

Jeff Burk, the erstwhile editor of Drag Racing Online, pondered, *”Who would have ever thought that the cost of a gallon of ordinary pump gas would be close to the price of a gallon of custom blended racing gasoline?”*
—
Vicki Williams asks, *”I am curious to know why both Jimmie Johnson and Kyle Busch had to start in the back at Las Vegas because of going to backup cars, but Jimmie really was at the back and Kyle was a few rows farther to the front?”*

Well, Vicki, I’ll have to admit I missed that, so I put it to our panel of editors here at Frontstretch. Sure enough, Beth Lukenheimer was ready with the answer.

She says Boris, from Joe Gibbs Racing, answered that question on Twitter during the race. Here’s the tweet from when someone asked him the same question. He said Kyle started the pre-race laps at the rear of the field, but some slower cars waved him by.

Thanks, Beth (and Boris – I’ve got to let them drag me kicking and screaming into this Twitter thing).

Now, I’m sure the next question is going to be, “Why didn’t slower cars in Jimmie’s lane wave him by?”

The simple answer to that is that they probably didn’t think of it. Another thought might be that those guys felt more comfortable with Jimmie Johnson being patient about working his way forward in a 267-lap race than the guys in Kyle’s lane did about Rowdy.

Can’t say I blame ’em.
—
David Odom in Elgin, TX writes, *”I was watching practice Saturday and noticed on the No. 18 car that the rear spoiler mount had a rounded notch for the vent tube where the catch can man once inserted the catch can. The catch can has been gone for two years, so why does the spoiler mount still have this round notch? I was just wondering.”*

Thanks, David, and a good question. I had a hunch that it was because NASCAR didn’t deem it essential to change the spoiler and didn’t want to make the teams change it. To be sure, I checked with Larry Mac, who said, “Correct! No sense in making new spoilers just to eliminate that notch! Serves no purpose and makes absolutely no difference now!”

Nice to guess right once in a while.
—
Glenn Douglas comes up with an idea, writing, *”NASCAR should make each race more interesting with giving additional points at the halfway point of each race instead of giving additional money… It would make for a far more interesting race, more pit strategy, etc… It would then make it a race within a race. Your thoughts? Would NASCAR consider this idea?”*

With all the emphasis on points, Glenn, I’m surprised somebody else hasn’t come up with this tweak. I think it’s a good thought. Everybody wants that special one-point bonus for leading a lap, so why wouldn’t they want a two-point bonus for leading at halfway? I think it should be less than for winning the race, but I think it’s something worth considering. Would NASCAR support such a notion? Well, since it wasn’t their idea, I don’t see them being too interested.
—
Our comments about safety being a moving target, along with the note that jet dryers could be converted to run on gasoline brought a LOT of responses.

A couple of people who are apparently well-versed on the topic said the conversion to pump gas is a BIG deal. I can understand that. Perhaps it’s done at some places because it’s a bigger deal to be able to fill up at their own pumps than to run to the nearest airport or to install more tanks.

And, a couple of others pointed out that jet fuel is actually low-grade kerosene.

I knew that, and should have remembered it. We learned a hard lesson about gasoline vapor igniting at Indianapolis in 1964. Most of the field was fueled by methanol, but two of the cars with gasoline aboard were involved in one of the most spectacular and tragic accidents in racing history. Two drivers, one of whom I knew personally, died that day.

The horrific scene from 1964 Indianpolis 500. Dave McDonald’s car struck the inside wall, ricocheting back into the path of Eddie Sachs in the tragic accident that claimed both lives. Those cars were the only two that day fueled by gasoline instead of methanol.

Dave MacDonald’s car impacted the inside concrete wall and bounced back across the track, and was hit by the car driven by Eddie Sachs. Both drivers died in this accident. Both cars were fueled by pump gas. One of the roadsters that can be seen coming through the flames was driven by Johnny Rutherford. I talked to JR the next week at a midget race in Louisville, and he still had a bandage over a burn on the back of his neck. He may have caught some flack from USAC for speeding up after clearing the wreck, but he said he saw flames in the belly pan of his car and sped up to blow them out.

It worked.
—
Thanks to everyone for their questions and comments. Keep ’em coming.