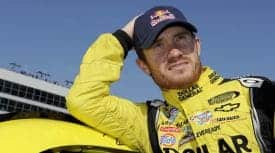 One month ago, the season-opening Daytona 500 entry list lacked a familiar face — Brian Vickers. But Vickers, a mainstay in NASCAR’s top series since 2004, remained optimistic about his plans for the upcoming season, warning fans to not count him out just yet.

“The point of the story is, I plan on being in a race car in 2012,” he said in a video posted on Facebook that February. “Hopefully, in a car that I can win with and contend for championships with.”

Brian Vickers certainly made the world sit up and take notice Sunday, but can he follow through after his stellar Bristol performance and earn a full-time ride?

After announcing a deal with Michael Waltrip Racing to drive the team’s No. 55 for six races, covering for when primary driver Mark Martin was not in the seat, Vickers set out to Bristol for his first short track race since that ill-fated day at Martinsville last October, during which he was involved in a number of incidents. Vickers eventually crashed out of the event, finishing 30th, but it was a black eye on a career that now needs a boost.

So, of course, there was much to prove entering Sunday. Besides Vickers’ chaotic appearance at Martinsville, he had not raced in five months, not since his 17th-place finish at Homestead last November. Plus, Bristol was his first race with Michael Waltrip Racing, so one might expect a preliminary period of getting used to a new car and a new team.

Vickers, however, did not have a few weeks’ time to get acquainted with his new role – nor will he going forward. Six races is but a small part of the 36-race season, so to impress potential employers, a strong showing from the get-go was a must.

And a strong showing he had.

After starting 25th, Vickers moved up through the treacherous Bristol field Sunday, eventually making his way to the point and leading for 125 laps. All told, the Thomasville, N.C. native remained a factor for the victory all day long, settling for a fifth-place finish behind winner Brad Keselowski.

Is Brian Vickers back?

I think those that enjoy happy endings would hope so. For those not turned off by the driver’s polarizing runs toward the end of last season (see also: Phoenix and Matt Kenseth), Vickers is a likable guy, and to see him succeed after being shafted in Red Bull Racing’s departure from the sport was a cool story regardless. Rather than taking a lower-tier ride (such as with BK Racing, the team that essentially took over Red Bull), he remained patient, accepting only a ride in which, as he showed Sunday, he can compete for wins.

But how much of the power this driver showed was more of a team effort? Though Vickers’ ability to step into a completely new ride on fairly short notice — and perform well — should not be understated, his teammates did not exactly have unspectacular days, either. Martin Truex, Jr. finished third, while Clint Bowyer came home fourth. A 3-4-5 finish is a superb showing for Michael Waltrip Racing, as the team continues to show some spunk these first few races of the season.

So did Vickers merely benefit from a team that very much had its act together at the track anyway?

Before answering that, one must consider his drive to perform. Again, this deal is only for six races at the moment. With only a limited time to shine, one must perform early and often. And if Vickers is able to continue with the quality finishes, good for him. But there seems to be a trend of drivers going all out when a job is on the line — just look at David Reutimann at the end of 2011, or Aric Almirola during his brief tenure with Richard Petty Motorsports in 2010. Performing under pressure is one thing, but there is something to be said for drivers excelling as free agents but relaxing once their job is supposedly secure.

The argument could be made that Vickers, should he retain more races on his 2012 schedule — or even a full-time ride — might lapse into his general 2011 form, which saw him finish in the top 5 only three times, with a 25th-place finish in the final points standings. Granted, Red Bull was on its way out of the sport in 2011, and even teammate Kasey Kahne struggled at times. Still, 2011 Vickers was a far cry from 2009 Vickers, who made it into the Chase, finishing 12th at season’s end.

Certainly, no one wants a driver who is going to underperform his clearly demonstrated potential once he garners a full-time ride. So if Vickers is able to gain full-time employment from his results with the No. 55, he will need to be sure to continue the attack he has already shown this season.

But where could he find a ride? On Sunday’s telecast, car owner Michael Waltrip mentioned the two road-course races, which could end up providing additional seat time for Vickers in his part-time role. While it would certainly be exciting to see the driver end up in a fourth car for Waltrip in other races throughout the season, sponsorship would be a necessity, and who knows if the three-car team can afford to stretch itself out into a four-car operation.

Vickers’ problem is that most — if not all — of the major Cup teams are booked full, unless a possibility opens up in the form of an additional car or a released driver. Richard Childress Racing’s No. 33 could be an option; the team announced plans to run the first five races and have done so, with both Elliott Sadler and Brendan Gaughan. The team currently sits 30th in owner’s points, giving it a guaranteed starting position past this weekend’s race, barring a poor finish at Fontana that results in a major slide down the standings. But aside from a race with Austin Dillon later in the season, the team has no other plans.

If Childress is willing to keep the team running full-time past this weekend to keep use of its “locked-in” status, and if Vickers could bring money/sponsorship, the pairing does not necessarily seem too far-fetched. Otherwise, Vickers has few options if he wants to stay with a competitive entry.

Of course, there’s also his past relationship with Turner Motorsports, which fields multiple entries in the Nationwide and Truck Series. A number of races have not yet been announced regarding the plans of Turner’s No. 30 Nationwide team, and its No. 32 has been dormant thus far this season. It wouldn’t be a competitive ride in Cup, per se, but could the driver move down a series and challenge for wins there, biding his time before a major league opportunity opens up?

Whatever his plans end up being, the rest of Vickers’ season depends on his performance in the No. 55 in the other five races — beginning April 1 in Martinsville. If he can pull off another impressive run there, we may be seeing some additional offers rolling in soon enough.