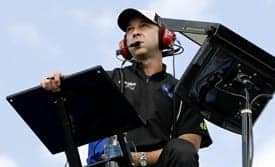 How confident was I that the penalties assessed against the No. 48 team for violations found in pre-race inspection at Daytona were going to be upheld? I actually wrote another column yesterday so I had something to file with the editors this week. Tuesday, I tended to errands and barely spared a glance at the Internet. I figured sometime late that afternoon I’d see a brief blurb the penalties had been upheld. That wasn’t worth sitting around waiting for on such a gorgeous, sunny and warm afternoon. So I did what I normally do on afternoons like today. I actually had my helmet in hand and was heading for the Harley when the phone rang. Anything that interferes with a chance to ride typically annoys me, but looking at my Caller ID I saw the number of a friend in North Carolina. He was working the “Stakeout” at the NASCAR R and D center Tuesday and promised to call me with any updates.

I’ll admit when he told me that the penalties against the No. 48 outfit had been by and large overturned I dropped my helmet. I asked him if he was kidding me (or words to that effect). But he was clearly as shocked as I was. The Harley was staying parked. My buddy wasn’t joking with me. The only joke was John Middlebrook’s decision.

Is there something rotten in Denmark? Matt McLaughlin certainly thinks so… and its name is John Middlebrook, who overturned Chad Knaus’ (pictured) suspension among other No. 48 team penalties Tuesday.

In case you were caught off guard, here’s the gist of Tuesday’s verdict. The $100,000 dollar fine against Chad Knaus was upheld. The 25 driver and team owner points were restored to Jimmie Johnson and car owner of record, Jeff Gordon. The six-race suspensions against Knaus and car chief Ron Malec were dismissed. Instead, both men will be on NASCAR probation until May 9th. (What’s that mean? Basically nothing. If a person on NASCAR probation is caught outside the rules again, he is then put on double probation and gets a loud scolding.)

I don’t know Mr. Middlebrook. I’ve never even laid eyes on him. I’ve been told by reliable sources that Rick Hendrick and Middlebrook have been frequent dinner companions over the years and that doesn’t surprise me. Before he owned race teams, Rick Hendrick made his fortune opening and running multiple new car dealerships, selling mostly Chevys and Hondas. With Hendrick one of the largest Chevy dealers in the Charlotte region, it isn’t surprising he’s had a few dinners with Middlebrook, a former top-level GM executive.

What is surprising is that given the level of familiarity between the two men, Middlebrook didn’t choose to recuse himself from the case. Certainly, if any judge in civil or criminal court had had dinners with a defendant or prosecutor involved in a trial, he’d have stood aside and let someone else stand in.

The verdict itself is baffling. Middlebrook let stand the $100,000 fine. While that might not be a lot of money to Hendrick, that’s two to three years’ salary for many fans. If an infraction is serious enough to earn a six-figure fine, how can it not be serious enough to warrant penalties that will actually hurt the operation of the team, the loss of team and drivers points and forcing Knaus to the sidelines for six weeks? Either the infraction was serious or it wasn’t. Trying to slice things down the middle like Tuesday’s decision did reeks of awkward compromise and cronyism. Even NASCAR officials are offering the fact the fine stood as proof that No. 48 car was illegal.

As you might guess, Rick Hendrick is basically pleased with Tuesday’s result, claiming he was confident all along that the No. 48 team and the car in question had been compliant with the rulebook. (A nice way of saying, hey we slipped one through on a rule that hadn’t been added yet.) He professed to be shocked by last Tuesday’s decision by a three-member panel to uphold the penalties. Then he added an offhand comment that set my blood pressure through the roof. He noted, “I would have liked to have the fine gone, too.”

Chad Knaus and Rick Hendrick were certainly in a celebratory mood after Tuesday’s surprise appeal verdict.

No … really? It reminds me of an old joke. A grandmother is walking her grandson down the beach when a rogue wave sweeps to shore and carries the lad out to sea. Unable to swim, she drops to her knees and begins to pray, “Oh, God, please don’t let my grandson drown. If you restore him to me, I’ll be the person I know you want me to be, I’ll confess my sins, and I’ll give one tenth of all I own to charity.” Another wave sweeps the boy back to shore and he’s fine. The grandmother looks up angrily towards Heaven and hollers, “Hey, he was wearing a hat!” For most of us, a $100,000 windfall would be a game changer but to Hendrick, it’s pocket change.

If Tuesday’s decision was just, where does that leave the NASCAR organization? NASCAR paid and trained inspectors identified the suspect C-pillars and flagged them as an infraction. Those aren’t the fellows that decided on the penalties to be issued. That decision moved way up the food chain to the top echelons of the sport’s hierarchy. The top brass had plenty of time to inspect those parts themselves and listen to the inspectors’ concerns. After long deliberation, they decided on penalties I felt were too mild but understandable. Then a three-referee panel of men that NASCAR appointed as experts listened to the evidence (for almost six hours) and came to a unanimous decision: the parts in question were illegal and the penalties were appropriate.

So we’re left with two possible conclusions. Either justice wasn’t served on Tuesday or all those NASCAR inspectors, officials of the highest rank and the referees they’ve appointed are all incompetent and should be immediately replaced by more savvy individuals. I mean seriously, the most damning charge thrown at the No. 48 team was “If in the judgment of NASCAR Officials, any part or component of the car not previously approved by NASCAR that has been installed or modified to enhance aerodynamic performance, will not be permitted.” So if NASCAR officials used their “judgment” (this one isn’t a litmus test, it is or it isn’t), and the C-pillars were obviously intended to “enhance aerodynamic performance” then how can you say the penalty wasn’t appropriate? The key word here is “judgment” not “measurement.”

Hendrick’s case hinged on the “not previously approved” part of the sentence. He said that that same car had passed inspection multiple times last year which is a nice way of saying, “We made you look like idiots last year and you’re going to look even dumber when this mess gets sorted out.”

Yeah, NASCAR is looking pretty stupid right now. They really didn’t need this. They’re quite good at making themselves look stupid on their own. If there is at least an appearance of conflict of interest, given Middlebrook’s personal relationship with Hendrick NASCAR didn’t do themselves any favors in that regard either. After all Lowe’s, the sponsor of the No. 48 team, is the Official Home Improvement Center of NASCAR, a title they write some big checks for to boast. In modern society, appearances are, by and large, reality and when it comes to the sniff test this one could knock a buzzard off a sh!t-wagon. NASCAR should have no official partners that are also sponsors of race teams to remove even the appearance of impropriety. (And in this economy, they should be courting sponsors that _back_ race teams, not ones to become the Official Whatever or What-not of NASCAR.)

The outcome today might have been preordained. The atmosphere at the R and D center is said to have been notably more subdued today than the quasi-carnival of last week. Two Frontstretch readers told me after feeling like they missed out on all the fun last week they decided to attend the parking lot “happening” this time. One had the day off anyway and the other took the day off. Both were turned away from the R and D center for lack of a NASCAR hard card. (An annual credential.) It was as if those in charge knew something unsavory was about to occur and the less witnesses around to see it, the better. You’d think if NASCAR wanted their appeals process to have any sense of legitimacy, in this electronic age they could have set up a web camera to broadcast the hearing to any and all who could sit through what was doubtlessly a highly technical discussion. For all their talk of “transparency” NASCAR apparently still doesn’t want to give the unwashed masses that make up their fan base a peek behind the curtain or even to be in the area when the Wizard makes a break for his hot air balloon.

“As I wrote last week on this topic,”:https://frontstretch.com/mmclaughlin/37651/ in order to be effective punishment needs to be swift, severe and certain. This whole mess has now dragged on over a month. The penalties that remain are not severe. Throw away the NASCAR rule book. Punishment is no longer certain – at least not for certain teams.

_Editor’s Note: Looking for the other side to this story? Check out Amy Henderson’s column “here”:https://frontstretch.com/ahenderson/37841/ which claims this decision was the right move. And most importantly, let us know what you think!_