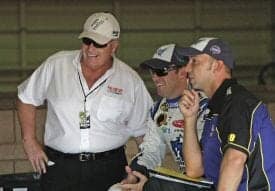 The decision of Chief Appellate Officer John Middlebrook created a ripple in the NASCAR community, creating every reaction from elation to outrage as word got out that Middlebrook had chosen to overturn nearly all of the penalties NASCAR had handed the No. 48 team of Hendrick Motorsports on Tuesday. The original consequences, stemming from a questionable C-pillar on the Daytona 500 car for five-time Sprint Cup champion Jimmie Johnson had been six-week suspensions for No. 48 crew chief Chad Knaus and car chief Ron Malec, 25-point deductions for Johnson and car owner Jeff Gordon, and a fine of $100,000 for Knaus.

After all was said and done, Middlebrook ruled that NASCAR had been too heavy-handed in the decision to penalize the team, and overturned all but the monetary fine, placing Knaus and Malec on probation through May 9. Both will be with the No. 48 at Auto Club Speedway this weekend and beyond, while Johnson jumps from 17th in driver points to 11th. The outcome was almost the best possible for the team and its fans, but it has left others in a state anywhere from scratching their heads to irate that “Cheater Chad” was getting away with something yet again. Those people will say that Middlebrook and Hendrick are longtime friends and that’s why the appeal was upheld, that the team got away with something shady, that Johnson raced an illegal car.

Think the penalty reduction was just about these guys? Think again, because it affects every team and race fan in the grand scheme of things, according to Amy Henderson.

First of all, none of that is true. While Middlebrook and Hendrick _do_ have a previous relationship, this instance isn’t the first time Middlebrook has reduced a penalty. In fact, he’s now heard four appeals and reduced the penalty _every time_. So while there may be a debate about whether Middlebrook has a bias against NASCAR’s rules, there isn’t one about favoring one team over another in the process. Did the team get away with anything? No. They had to fix the car before it was allowed on the racetrack, so the car that Johnson raced in the Daytona 500 (for a whopping two laps before falling victim to a wreck) was a legal racecar. It was inspected at least twice more after the initial inspection and passed.

What Middlebrook’s decision did was to bring the penalty almost in line with a July 2011 incident in which the No. 18 did _not_ pass prerace inspection due to a C-pillar issue and was forced to make repairs before having the car reinspected and continuing with their weekend without further penalty. The $100,000 fine still upped the ante this time around, but it’s much closer to what was done for the same infraction previously. And while some will argue Knaus’ previous record, the fact is that the No. 18 has been penalized more often in the past five years than the No. 48, so that argument holds no water.

But the real issue here isn’t whether Knaus and his team pulled a fast one on NASCAR and the competition; it’s about how NASCAR polices the sport. It’s not about the number on the side of the car that brought the appeal or about any one race team in the garage. It’s about so much more. In the big picture, Middlebrook’s decision is a good one for every single team that brings a car to the racetrack.

Why? Mainly, it sends a message that “It didn’t look right” is not a valid reason for slapping a race team with a hefty penalty. There is simply too much at stake for the sport’s sanctioning body to take such a lax approach to the inspection process. There are so many factors that can potentially affect a sight line: light and shadow, the angle of a decal, the color or shine factor of paint, the viewing angle. Simply eyeballing a car that has been prepared to fit tolerances within fractions of fractions of inches just doesn’t cut it.

While the No. 48 incident happened in the season opener, imagine this scenario: heading into Phoenix in November with two teams locked in a championship battle, rolling into opening inspection at the penultimate race of the year, an inspector decides something “doesn’t look right” on one of the cars and refuses to put the template on. That team is then docked enough points that it’s all but guaranteed that the championship is out of its grasp, even if the team is able to fix it and race. Imagine if that organization is one that has never received a major penalty before. Imagine that there was, in fact, no infraction, and that would have been proven in a complete inspection. Not only is NASCAR taking away a potential championship with no actual proof of any rules violation, they’re denying race fans the chance to see the championship play out, all because of an issue that may or may not have even been real. Can you say PR nightmare?

Had the penalty been upheld, that would have become a very realistic scenario. Hopefully, Middlebrook’s ruling will force NASCAR to step back and realize that they must be consistent with the inspection process before they consider if a team is not playing by the rules.

Furthermore, it sends the message that arbitrary punishments among different teams for the same infraction are not kosher. It’s one thing to step up the punishment if teams don’t get the memo, but quite another to go from no penalty at all (the right call for the No. 18 at Indy) to a debilitating points deduction and suspensions all at once. Bumping it up from no penalty to a hefty fine and probation sends the message loud and clear that if teams continue to work in the same area of the car they are asking for trouble. Whether teams should ever be penalized for something found in opening technical inspection is very debatable, but at least you’re keeping points out of the picture. And if a third team should choose to risk massaging the C-pillar and gets the next step on the ladder? Well, perhaps they should have known better.

Whether or not the fact that the car never raced with a questionable part or measurement was part of this verdict, again, perhaps the decision itself will force NASCAR’s hand in looking at how they penalize. Taking points when none were earned is simply ridiculous. Fines and suspensions are never warranted for a car that never earned one single illegal point – that’s one thing – because if the car that earned the points was legal in the end, there is no reason for NASCAR to take them. (If the car is found to be outside of tolerance _after_ a points-paying event, that’s a whole other matter.).

All things considered, even if the No. 48 _had_ gotten away with something at Daytona (and they didn’t, because the car in question never got on track until it was fixed to NASCAR’s satisfaction), Middlebrook’s ruling to drastically reduce the penalty is one that _all_ race teams and fans should be happy about. Why? It kept NASCAR from setting a precedent that would be _truly_ detrimental to stock car racing – far more detrimental to the sport as a whole, in fact than a single car managing to get away with a minor rules infraction. Suddenly, an inspector’s eyeballs would be good enough to change the entire direction of a sport. Is that what you want?

Sometimes, it’s more important to look at the big picture than at instant gratification. While crucifying one team may have given that to some, in the larger scheme of things, it could have set a precedent with ominous and sweeping implications for everybody in the future. That’s the picture that needs to be in focus here. It’s not about one team and what they might maybe have done or not done. It’s about an entire sport and how that sport is policed. The message John Middlebrook sent to NASCAR was loud and clear: the policing of the sport needs to be consistent, and it needs to be based on a compelling (not simply eyeballed) evidence of wrongdoing. Now it’s up to NASCAR to heed that message for the good of all.

_Editor’s Note: Looking for the other side to this story? Check out Matt McLaughlin’s column “here”:https://frontstretch.com/mmclaughlin/37837/ which claims this decision was the wrong move. And most importantly, let us know what you think!_