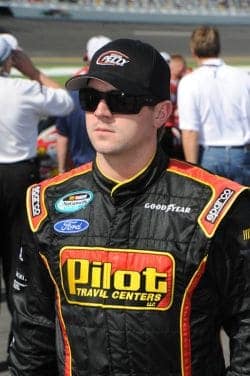 I’m with a new team for this year. Obviously we put this deal together very quickly. With the way everything happened with me and my situation, we had about a month to put the team together. Three weeks before Daytona we didn’t even have the full team yet. Philippe Lopez was hired on as crew chief and he went from there and really built a great team around the No. 43 car.

I’m really comfortable with my crew already. It’s a great group of people and I think the start we’ve had to our season is just a true testament to how hard they work and how committed they are to this.

Michael Annett is wearing his familiar Pilot colors in 2012, but driving the No. 43 in those colors is something special for the Nationwide Series regular.

It’s a huge honor to drive for The King. It’s something not too many people are ever going to have the chance to say they did and the fact that we get to run the 43 number. It’s an iconic number in the sport. It’s truly an honor to be there each weekend with that number on the door.

We had a good run at Bristol this past week so I think it shows we’re getting comfortable as a team. I think we’ve shown that at all types of tracks, the superspeedway and then we were pretty decent at Phoenix and Vegas. Going in to a short track like Bristol, a lot of people look at it like a survival race.

We went through practice trying to get the feel that I was looking for and then in the race realized we were behind a little bit. We struggled the first half of the race but Philippe made some real good changes on the car and just kept making it better and better and giving me the feel I wanted. To be able to compete well at Bristol, if you’re uncomfortable there it’s an uphill battle for sure all day. We got the car where I wanted it and drove up and ran around 15th all day and then in the final 30 lap stint we drove up to 11th. For the first short track for a brand new team, Bristol is not like any other normal short track, to get an 11th and we actually missed getting a top ten by about a foot, it was a good showing and makes me excited for our short track program for the rest of the year.

I enjoy the track the way it is now. I’ll tell anybody, I enjoy race tracks where the driver’s not just waiting for that next pit stop to get better. At tracks where you can run the bottom, run the middle, run the top, as a driver there’s different things you can do and improve yourself and improve your lap times before you get a chance to work on the car. Then on the other hand I was a race fan once too before I started driving and you always waited for that Bristol night race and all the excitement that it brought so I understand completely why the fans would enjoy seeing us go back to the bump and run and things like that. As a driver I can see it both ways. We’re here because the sport is for entertainment and we wouldn’t be doing what we’re doing if it wasn’t for the fans.

March Madness is the big topic for everyone right now. I’m really not a college basketball fan but I always used to do brackets and never really did very well at them. This year is probably the first year in a long time I didn’t do one. Being from Iowa, I did see Iowa State had some success early on. They eventually lost but they made it a couple of rounds so that was cool. Basketball hasn’t really ever been my thing. If there is any sport that I am just absolutely horrible at, it’s basketball so I guess it’s kind of hard to get into watching it. Hockey is more my thing.

To tell you a little bit more about me, the biggest thing I listen on my IPod is country music. It really doesn’t get too far off that. There’s a couple of O.A.R. songs on there but if you get in my truck and you listen to music it’s either country or Howard Stern.