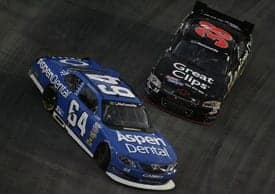 Still, the paying fans have spoken. And while SMI’s fan polling suggests that doing that may well fill up grandstands for BMS’ notorious night race later this summer, the good news is seemingly confined to the Cup Series. Because there’s no doubting that a return to the old Bristol means that cautions, incidents, damage, are all going to rise. One-groove at 160 mph entering a corner is a recipe for a mess.

A return to the old Bristol configuration is going to subject a lot more Nationwide Series race cars to incidents such as these.

That may not be a big deal for the Cup ranks, but for the Nationwide guys, the Truck guys and every other level of racing that tackles Bristol without having a literal armada of replacement cars and personnel back at the shop to repair/replace damaged vehicles, this has trouble written all over it.

Take a look at the caution flag stats from old vs. new Bristol. Prior to the reconfiguration, Nationwide Series races at Bristol were averaging at least 13 cautions a race. Upon adding progressive banking, the first race for the NNS regulars on the new surface produced 12. In the fall, 11.

Since that first year, the average Bristol race has been slowed by yellows only 7-8 times a race. This past weekend, that number was at four, the lowest since 1992.

This does not suggest boring racing. Sure, it may mean a reduction in the fireworks that make every Bristol highlight reel, from Ward Burton throwing gloves to even the great Dale Earnhardt being harshly booed for wrecking Terry Labonte. But for whatever reason, they don’t make highlight reels of drivers setting up passes and making them, of drivers battling side-by-side, of cars that come home in one piece. There’s one side of the story that obviously wasn’t being considered when Bruton’s latest renovation project came to the forefront, being able to race at Bristol and bring home a car that will roll onto the hauler.

Because that’s the real issue for any team out there running on less than Cup money. Take a look at the Nationwide Series entry list and it’s hard to find many teams that can just shrug off tearing up a race car. Unsponsored teams, teams with a limited stable of cars, they’re not going to benefit from this renovation of the Bristol Motor Speedway when they return to Tennessee in August.

Scan the Nationwide Series schedule right now. Between the three plate races and three road course races, already nearly 20% of the season schedule consists of demolition derbies. Not to mention that Bristol falls on the calendar directly after Watkins Glen and the Circuit Gilles Villeneuve in Montreal, a road course that over the past few seasons has proven just as treacherous to race cars as anything Daytona and Talladega have to offer.

There’s also the element of driver development taking a hit as a result of this move back to follow-the-leader bullring from a track that actually facilitated passing. With the exception of open-wheelers making the transition to stock cars, the vast majority of drivers working their way up development ladders come from one-groove short tracks. They already know how to bump drivers out of the way to win. Where development comes in is learning to set up passes, and to do so over the lengthy duration of NASCAR’s touring series races. Scratch Bristol from that list.

Side-by-side racing is going to the wayside. Races run as much as 50% under yellow are going to be the norm again. The Nationwide Series and their already stretched-thin roster of teams has to circle two more race dates in red as events where the car may not be coming home…and now have three such dates in a row to boot.

And all of this to theoretically restore luster to the Bristol Cup races. All of this despite the fact that the Bristol night race has been significantly tamer since the first Chase season in 2004, and that the economy has inevitably deterred fan participation in a race weekend with a well-earned reputation for being among the most expensive on the schedule.

Besides, it’s not like the Nationwide Series teams are going to see a purse increase if ticket sales go up. Nope, this is another one of those suck-it-up and take it moments for NASCAR’s AAA, popular move or not.