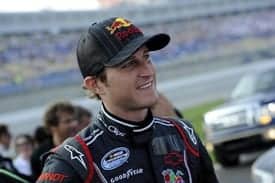 Back in April 2010, when Kasey Kahne first signed on the dotted line with NASCAR’s powerhouse team; he knew there would be a couple transition seasons before he finally started piloting Hendrick horse-powered cars. In fact, it would take the better part of 20 months before Kahne finally pulled those belts down tight in the No. 5 Hendrick Motorsports ride: a journey that included a one-year sabbatical at the now defunct Red Bull Racing outfit as well as more than half a season finishing up his Richard Petty Motorsports contract. 2012, then, was meant to be the year he ignited a sustained and genuine title challenge that had been years in the offing.

So far, not so good this year.

Kasey Kahne’s start to the 2012 season has been downright awful…but don’t count him out, yet.

Let’s quickly review Kahne’s season to date. In the great American lottery of a race he was swept up in a late multi-car wreck and finished 29th. The following week at Phoenix he ran well in the early going before slamming into a wall, unaided, a move he would describe after as a “big mistake”. The following weekend in Sin City, Kahne qualified on pole in a track record time (more on that later) but couldn’t make the speed last and ended up a disappointing 19th.

A week removed from that struggle, the 31-year old Enumclaw, WA native appeared to be in an upbeat mood prior to the rain-shortened Auto Club Speedway event.

“I would be down if my cars were slow, but everything has been so good,” Kahne said. “…But wrecking has been the problem. Everyone in NASCAR has wrecks. As far as the racing stuff, from the cars to the pit stops to the team and the engines, the car is awesome. My team is so good. There’s really no reason to be down, other than we’re not in the position we want to be in.”

Again, this past Sunday Kahne qualified well, rolling off in fifth place but a caution-free (if not weather-free) race meant the opportunities to make in-race corrections never really materialized. Kahne fought a loose condition all afternoon, winding up with an (ahem, add your own massive air quotes) “season best” 14th place finish. As Kahne said so succinctly on Twitter after the race, “Pissed I ran bad. Happy my car is in one piece.”

Mired in 27th place in the standings, almost two and a half full races-worth of points behind leader Greg Biffle and nearly 70 points out of the top 10, it’s clear Kahne has a huge hole to dig himself out from. So should he be worried? Is his dream job souring into the worst kind of sweat soaked nightmare?

Well, yes and no. Clearly, with an average finish of 26.6, albeit on a small sample size of races, there are problems in the number No. 5 camp but none which are insurmountable. For a start, just look at Kahne’s qualification efforts outside of Daytona. He snagged a pole at Las Vegas, started fifth at Fontana and earned a pair of tenth place starting spots at Phoenix and Bristol – a sure sign that the car has some speed if not in the long haul then certainly through practice and qualification, which augurs well for Kahne, no question.

Other items in the positives column for him is the sheer power of Hendrick Motorsports and team owner Rick Hendrick who waited an awful long time (practically an eternity in NASCAR terms) to secure the services of the softly spoken, elfin Kahne. The parts and pieces in place at the shop (both in terms of equipment and also personnel) are top echelon stuff and you can bet behind the scenes Mr. Hendrick is doing everything he can to right the ship.

Added to this potent mix is the man atop the war wagon – crew chief Kenny Francis who has been handling the job with great aplomb since the final race of the 2006 season. The symbiotic relationship between Francis and Kahne has paid dividends over the years and there’s no reason to suspect it won’t (eventually) be the same at HMS. Put simply, Francis is too good a crew chief, Kahne too good a driver and HMS too good a team for this string of terrible results to continue. Let’s not forget, bad luck doesn’t last forever. Unfortunately though, misfortune is one of those intangibles that are all but impossible to quantify, so whilst I can glibly say bad luck isn’t forever, it’s one thing no amount of planning and foresight can negate.

All that being said, as of now it’s just a slow start for Kahne. With the way the points system is set up this year and the inherent reward associated with a regular season victory, the chances are Kahne will find himself back in Chase contention sooner rather than later. Remember, this is a driver with 12 wins, 23 poles, 57 top-5’s and 102 top-10’s in 293 career starts. It’s not like he’s forgotten how to get it done. His last win came in the penultimate race of the 2011 season too, don’t forget.

The pedigree is there from a driving perspective and the team and the support he has all indicate that this slow start is simply a blip on the way to bigger things and better results in the not too distant future. And if it doesn’t, at least he’ll have the scant solace of another good commercial under his belt – that Farmer’s Insurance spot with the fire extinguisher is pretty funny. Wonder how many takes that took?