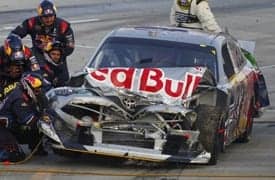 *NASCAR Sprint Cup Series: Will Rivalries Ignite This Week?* The 2012 Sprint Cup Season has been downright tame so far in 2012. Sure, there were crashes at Daytona and an early dustup at Bristol; but really, drivers have been on their best behavior so far. But as the series heads to Martinsville, the flat little paperclip-shaped short track in the Virginia foothills, will the good manners last?

That’s a good question. There hasn’t been much action that would spark a full-blown wildfire this year, but there are a few festering wounds from 2011: Kevin Harvick and Kyle Busch aren’t suddenly feeling the love. Matt Kenseth has a bone to pick with Brian Vickers. So does Kasey Kahne. So does Jamie McMurray. So do the other guys who got caught in the crossfire last year. Jeff Gordon says he’s forgiven Dale Earnhardt, Jr. after a Bristol get-together compounded his points woes; but will he remember that if he gets frustrated with his teammate again this week?

Brian Vickers’ car looked like this after the Cup Series last visited Martinsville. Will old rivalries reignite this week?

The Sprint Cup drivers have shown impeccable manners on the racetrack so far. But this is the week where racing returns to its roots. Is something rotten at the core? This could be the race that sets up the rivalry that fans are hungry for. That makes it one to watch. _–Amy Henderson_

*Izod IndyCar Series: Castroneves Named Favorite Driver; Wheldon Wins Fan Vote* IZOD IndyCar series veteran Helio Castroneves was presented with the award for 2011 IndyCar Series Favorite Driver during the Honda Grand Prix of St. Petersburg weekend. Jacob Wilson won for Firestone Indy Lights, Sage Karam for STAR MAZDA Championship Series, and Zach Veach for Cooper Tires USF2000 also received the award in their respective divisions. The award was determined by fan vote. The late Dan Wheldon actually won the IndyCar Series fan vote with 41.60% of the vote to Castroneves’ 9.28%, so it’s not clear why Castroneves was presented with the award instead. Wheldon lost his life in a tragic crash during last year’s IndyCar season finale at Las Vegas Motor Speedway. This week’s race marked the first time the series has raced since that day.

The voting results page on the IndyCar Series website notes that they will “salute the winning drivers at the Honda Indy Grand Prix of St. Petersburg, as well as honor the late Dan Wheldon as favorite driver for the IZOD IndyCar Series.” It was noted on the plaque held by Castroneves that the award was given in memory of Dan Wheldon and Wheldon’s sister Holly was there for the presentation. Hopefully IndyCar will clarify the situation; we can’t be the only ones wondering. _–Toni Montgomery_

*NASCAR Nationwide Series: Early Break a Boon or a Bust?* While the Truck and ARCA Series are accustomed to having multi-week breaks early in their schedules, this is territory the Nationwide Series has not visited in recent history. It’s certainly going to be a welcome breather, after a hectic first five weeks. The two-week hiatus will also give drivers such as Trevor Bayne and Kenny Wallace opportunity to focus on courting vital sponsor dollars needed to stay on track.

That being said, a two-week break is also something that’s going to wreak havoc with any momentum, positive or negative, that teams courted both at Fontana and over the last month. Was points leader Elliott Sadler’s ninth-place finish at ACS a product of poor pit strategy, or is the No. 2 team showing weakness on the longer ovals? Will Justin Allgaier and the Turner Motorsports operation be able to shake off a late engine failure, or will the next two weeks leave that sour taste fermenting that much longer? And will Bayne and Wallace be able to make hay over the hiatus to stay on track?

This extended break in the schedule right as the season begins to gain traction is unpredictable to gauge. It may very well be that, after an exhausting five-week stretch, a couple weeks off to catch up, cool off, and head into another westward swing refreshed will prove a welcome boost to teams and drivers alike. But there’s also another risk, as the 2012 season has had a positive start, with series regulars winning four of the first five races. Now, they’re heading into a long dry spell coming off a race that, by reputation, is not a popular one… and was dominated by a Cup regular.

One can only hope the season isn’t derailed by the same schedule that’s already raised questions this early in the season. _–Bryan Davis Keith_

*NASCAR Camping World Truck Series: Back on Track At Last* Have you missed your Truck Series racing? Well, don’t worry, because they’re finally back in action this Saturday afternoon at Martinsville Speedway. In this race last season, Johnny Sauter executed a near-perfect bump and run on Kyle Busch with just two laps remaining to become the first Truck Series regular to visit victory lane four races into the season. With just one race under their belts, it’s hard to pick a favorite for the victory, but it only makes sense to believe that Sauter can repeat. However, it’s actually Cale Gale who holds the best average finish with a lone seventh place last fall at the half-mile paperclip. The Kroger 250 will be broadcast live on SPEED Saturday, March 31st at 1 PM EDT. John King is the current points leader after a surprising victory at Daytona last month. Who will be on top when the dust settles at Martinsville? We can’t tell you that, but you can bet it will be an exciting race to find out! _–Beth Lunkenheimer_

*Short Tracks: “Chasing” A Favorite Son* Chase Elliott continues to establish himself as one of the best Super Late Model race car drivers in the country. Saturday night he went to Mobile International Speedway and wrested the lead away from Augie Grill on lap 77 of the Miller Lite Super Late Model 100 lap race. He then held off a spirited charge by Mike Garvey on a green-white-checkered finish to score the win. With that trophy in hand, Elliott headed to Five Flags Speedway in Pensacola for the season opening Pepsi Next 100. Just as he did Saturday at Mobile, Elliott paced himself until the end of the race and took advantage of Jeff Choquette being slowed by lapped traffic. With three laps to go in the 100 lap event Elliott passed Choquette and went on to take the win. It is the second consecutive win at Five Flags for Elliott who claimed the prestigious Snowball Derby at the famed speedway in December. _-Mike Neff_