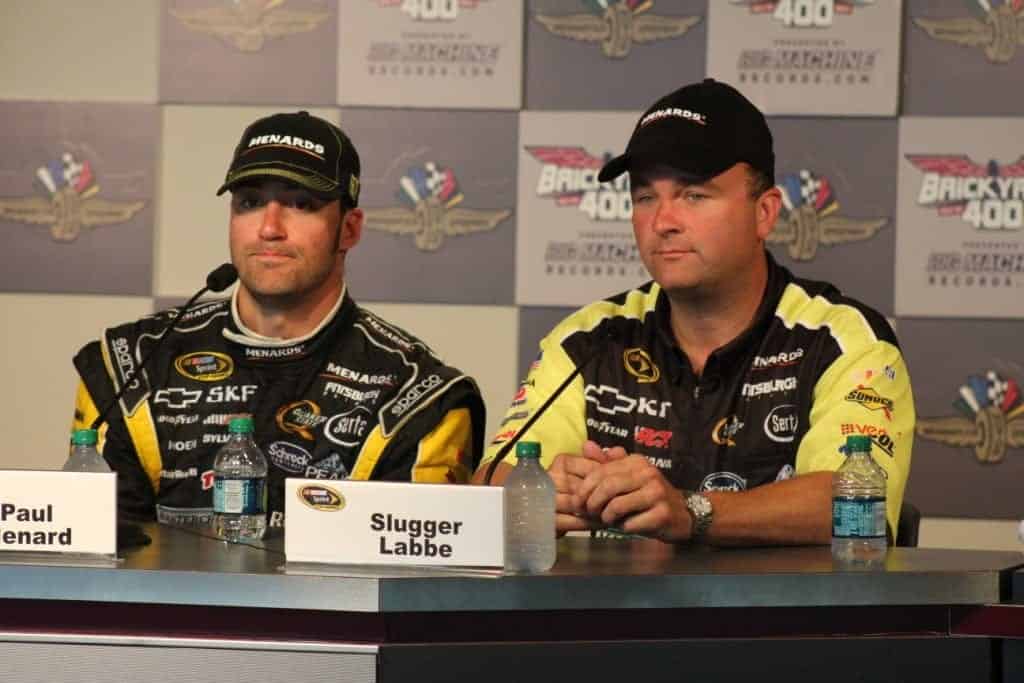 Slugger Labbe and his driver Paul Menard after their victory at the Brickyard in 2011. (Photo by Yvonne Leonard)

_Frontstretch caught up with Slugger Labbe, crew chief for the No. 27 ride of Paul Menard for this week’s edition of Tech Talk. The Saco, Maine crew chief has led three different drivers to five career Cup series victories. He’s been on top of the pit box for wins in the Daytona 500 and Brickyard 400. He touched base on getting ready for Martinsville and the role EFI will play this coming weekend._

Mike Neff, Frontstretch.com: We’re coming off of California and heading to Martinsville. California is obviously a big, wide, two-mile race track where downforce is king. Is there any real application of downforce at a little track like Martinsville?

*Slugger Labbe:* It is funny you say that, we actually have a Martinsville car going into the wind tunnel on Friday (March 23rd) to compare the differences between a car that is going to Texas vs. a car that is going to Martinsville. We don’t build a lot of downforce into Martinsville cars. We just build them as light as we can and as small as we can and try to get as much weight as possible out of the cars. Aero doesn’t come into effect, low center of gravity comes into effect at Martinsville so that is what we focus on.

*Labbe:* Last time we were at Martinsville we had been in a wreck with Robbie Gordon, we ran into the back of him, and knocked the radiator out. We definitely look at ways to improve the way the radiator is installed in the car and the bumper bars around it, duct work, the cooling apparatus. Generally you don’t run hot under green conditions, you run hot when the yellow comes out and you run around the race track at a slow pace. I think it is 30 mph pit road speed and pace car speed at Martinsville. So you’re really creeping around out there and then you get wrecks so there is oil down and water down. It takes a while with the speedy-dri and the safety workers to clean up all of that out there. So you run around out there at 30 mph and the engines get really hot while you’re creeping around, so that is the biggest thing that I worry about at Martinsville is when the caution comes out, how hot does the engine get and how can we prevent it.

Neff: That is interesting. I never thought of that but that makes sense. On the brake side of things, at Martinsville you have the two long straights and the very tight turns and keeping the brakes cool is always a concern. Are there limitations in the rulebook or on the NASCAR side of things as to how many openings and ducts you can have and how many fans you’re allowed per brake?

*Labbe:* That’s a good question. The basic way to answer that is yes, the duct that goes behind the nose is a NASCAR spec. part number and I believe there are three or four manufacturers of that part number. You can’t just manufacture your own part you have to purchase it from Roush or another manufacturer of carbon brake ducts. There are three or four that are approved for NASCAR, Sprint Cup action. You can run as many as three fans inside the brake ducts and you can run as many as two to cool the tire or the bead off. That is one of the biggest things we fight into a long run, the brakes get hot and the next thing to take the heat is the bead of the tire, that mounts to the wheel, and that is usually the next thing to fail. So we pay a lot of attention to cooling the brakes but we also pay a lot of attention to cooling off the bead of the wheel.

Neff: Here’s an off-the-wall idea I’ve had. I’ve watched 24 hour races and endurance type racing and they do brake changes during the race. Have you ever heard of anyone or you yourself thought of doing a brake change at Martinsville, under caution, if there was some kind of quick change setup to allow for that, since they are so important at Martinsville?

*Labbe:* Well they are important but the good thing with technology is that it changes every day and generally gets better, so generally our brakes are in good shape but the biggest thing that happens in the fluid inside of the caliper gets hot and that is where your brake fade comes from, not so much the rotor being gone or the pads being gone. The brake fluid inside of the caliper gets so hot that it actually starts to boil and that is where your fade comes from. Track position is so important at Martinsville that you would not want to take the time or effort to change out brakes but we do spend a lot of money going to Martinsville, on brakes. We’ll unload on Friday with brand new parts and pieces and then on Saturday, after qualifying, we’ll put another set of brand new brakes on, so you’re talking about $40,000 worth of brakes just to run Martinsville.

Neff: Holy cow that is a lot of dough!! Ok, let’s shift to gearing. I know on the superspeedways they have a limitation on the rear gears you have at your disposal, is it the same at Martinsville?

*Labbe:* It is, we have two ratios, I believe it is a 6.33 and a 6.50. We all choose to run the 6.50 gear. What is new for us this year at Martinsville is the EFI, Electronic Fuel Injection System which now allows us to do engine braking in the injectors that will help us slow the car down. We can retard the timing in the engine so when he gets back to the gas he won’t spin the tires up off of the corner like we typically fight. There are a lot of different scenarios that we’re all going to be trying when we get to Martinsville because there are ways now that we can get the engine to help us hook up our race car.

Neff: Speaking of EFI, we’ve seen a variety of different issues so far, and obviously it is a new system so you’re going to have some bugs to get worked out while you’re getting used to it. Is there a way to try and test for the stuff that has happened so far or is it a matter of just having to face the different issues as they arise and figure out how to deal with them as they happen?

*Labbe:* Well, I think NASCAR has done a good job. They gave us a bunch of open tests with the EFI: Charlotte, Phoenix, Martinsville, and Kentucky. So we’ve got plenty of data on the EFI stuff, it is just a matter of understanding what you’ve got and working with the parts and pieces to make sure you use the right applications. What scares me about Martinsville is the alternator. The amperage draw on the alternator. To cool our brakes and our tires, we’re generally using right at the maximum output of the alternator. Well now, with the two lift pumps in the fuel cell that draw a lot of amps, as well. I think we could see some potential problems with alternators and batteries dying during the race simply because of the fact that we’re over working the alternator with the amp draw that we have between the fans and the lift pumps.

Neff: As far as the lift pumps in the fuel cells, are they a defined part of the system where you guys get to choose which pumps to use and the location of them or is that pretty much defined by the rules?

*Labbe:* There are specific part numbers that we have to use. I think there are two or three manufacturers that I think the majority of the people in the garage are using. It is your option where you want to put the lift pumps. You can put two on the right side, two on the left or left and right, it is pretty much your option as to what you’re into and what you’re looking at. I think a lot of people are trying to determine how many miles we can put on a lift pump before we get rid of them. It is all new to us and we learn every day, it is just a matter of paying attention to detail and realizing what you have to work with.

Neff: One last question, you mentioned the alternator. I know that, from looking at engines and working on race cars, the alternators are relatively small in racing because you’re wanting less weight and less draw on the engine. When you head to Martinsville, because you’re going to be using more amps, do you use a bigger alternator or is there a thought of using a larger one because of that increased draw?

_After a 19th place finish at Auto Club Speedway this past weekend, Labbe’s driver Menard is sitting in 11th place with three top 10 finishes through five races this season. The No. 27 team is hoping for a strong finish at Martinsville because Menard has never had a top 10 finish at the track in nine career starts. His average finish at the historic speedway is 22.7._