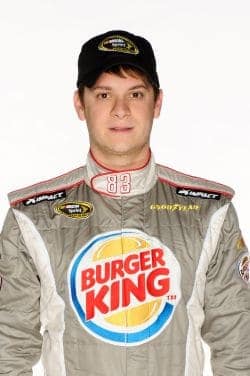 _Since he began racing four-wheelers at the tender age of three, going fast has been a way of life for Landon Cassill. He won his first racing championship at age eleven, and never looked back on a road that’s led him to the top of this sport’s stock car ladder. He once won three state titles in different divisions – two in karts and one in midgets – in the same night._

_Cassill got his NASCAR start as a Research and Development driver for Hendrick Motorsports, and that led to a Nationwide Series ride, where Cassill won that series’ Rookie of the Year award in 2008 despite running only a partial schedule. Fast forward to 2012, and Cassill became the driver of choice for the upstart BK Racing team, the “young gun” they’re building a foundation for while looking towards a long-term future. Cassill sat down with Frontstretch.com’s Amy Henderson in Bristol for a discussion about winning, goals, mini-golf, and the Landon Cassill you don’t know … yet._

Amy Henderson, Frontstretch.com: *You’ve been racing at some level since you were three years old. How do different types of racing prepare you as a driver?*

Landon Cassill: I’ve been fortunate enough to win in just about everything I’ve raced, and that’s really what’s propelled me to the next level.

Landon Cassill has lived the fast life since he was a young child. Photo Courtesy of John Harrelson, Getty Images.

Henderson: *How much harder does it get once you get to the top levels?*

Cassill: It’s tough. I mean, it’s really tough. There’s only less than 1% of race car drivers who get to do this, so to be in the top 1% is unbelievable. It’s very hard. There’s a lot of drivers out there who probably are good enough to be here but just haven’t caught their breaks yet.

Henderson: *You started out doing research and development for Hendrick Motorsports and that helped you get your start, but it’s still been a hard road for you, it seems. Now you’ve come to BK Racing in an eleventh-hour deal. How did that come about for you?*

Cassill: The economy has been tough on our sport. NASCAR relies on a lot of marketing, and unfortunately the marketing budgets have been tightened up. I was still able to do a lot of testing for Hendrick, and that was what has really been the biggest blessing for me, to have those opportunities. I drove for James Finch last year in the Cup Series, and then this deal came together. These guys that are starting BK Racing called me up and they had been watching me and wanted me to be their driver. So that’s kind of how you have to do it. You have to build relationships and be good to people and be good to work with and obviously be talented.

Henderson: *Your team was fortunate enough to be able to acquire the Red Bull equipment, but you’re still a fairly new team. What is the learning curve like when you come to a team that’s not only new to you, but the team is new as well?*

Cassill: It’s tough. You’re trying to organize what you’re doing and your routine and how things are going to be, and you’re getting to know everybody and what they like and what they need and how to communicate. So these are all things that take time. It takes months and months and months and sometimes years to get used to it and perfect it. So you try to hire good people, you try to keep those good people and get to know them and treat them well and use all the talent that they’ve got. Hopefully that builds a successful race team.

Henderson: *So, keeping in mind that you are a new team, what goals have you set for yourself and your team this year, both immediate and long-term?*

Cassill: Our immediate goals are to get the car locked into the top 35 in points and have some good runs, and to show that we’re here and we belong here. Our long-term goals are to build a competitive Sprint Cup program. I think we’re very capable of that. We’ve got some good race cars to get us through this year, but by next year, we’re going to end up needing to build some new race cars, and we’re going to need to build good cars. So it’s something where we’re just going to have to keep working, and hopefully a couple of years from now we can be in the top 10 and racing for the Chase.

Henderson: *Your online biography lists video game development as something you’ve done. Can you tell me about that?*

Cassill: I actually worked with iRacing a lot in developing their new tire model. I haven’t been doing it as much lately because I’ve been focusing straight on the Sprint Cup side, but iRacing is a really good training tool for me, and that’s probably what I get out of it the most is training. They’re really good people over at iRacing; they have a great product, and it’s a lot of fun for anybody to do to race on iRacing, not just race car drivers, but anybody who is into racing. It doesn’t cost too much money to have a hobby like that and get to race.

Henderson: *How much can you learn from the simulators and video games as far as racing at different tracks? A few years ago, Denny Hamlin talked about basically learning Pocono by racing it online.*

Cassill: You can learn an awful lot. You can familiarize yourself with the racetracks and the places that you’re going. The cars drive very similar, actually. They’re very realistic. You try to get what you can out of them.

Henderson: *Do you have any other video games you like to play?*

Henderson: *I’ve heard you’re a big music fan. What are you listening to these days?*

Cassill: I’m into all kinds of music. I like hip-hop, indie rock and things like that. I’m kind of into the online underground music scene. I like to search hip-hop blogs and things and see what’s new and what’s hot. Lately I’ve been listening to a lot of electronic music and some club music and hip-hop. There’s some good DJ’s out there that I like to keep in mind.

Henderson: *What else do you enjoy doing away from the track?*

Cassill: I live in downtown Charlotte, and I love hanging out. In the summer I’ll go to the pool or grill out. Living downtown I can walk anywhere I want, so that’s pretty nice. There are a lot of good restaurants around. I’ve got my spots that I go to. I love going to Hooligan’s, that’s a little soccer pub where I can go hang out and have a beer on an off day.

Henderson: *Are you a soccer fan?*

Cassill: I do like watching soccer. Actually hanging out at Hooligan’s has gotten me more into soccer. I played when I was a kid. But it’s nice to go hang out and see familiar faces outside of racing.

Henderson: *You got on a miniature golf kick at Daytona when you played with some fans while waiting out the rain. You said you’d try to keep it up at each track. Have you found any place good locally … say if someone was coming to Charlotte, where should they go for a game?*

Cassill: You know, I haven’t played mini-golf in Charlotte yet. We’ll probably play this weekend. So far the best place we’ve found was in Las Vegas. That was a fun course. I can’t remember the name of it, but it was in Vegas, not on the strip. We’ve enjoyed it. My dad and I and Joey, my manager, go and the three of us get pretty competitive at it.

Henderson: *What would surprise people to learn about you?*

Cassill: I honestly don’t know. I think I’m pretty transparent. The other day I tweeted that I needed somebody to play _Call of Duty_ with because I was getting my butt kicked playing online, and so I actually made a couple friends off of Twitter and now there’s a group of five of us who got in a clan together and play _Call of Duty_ all night. So I think I’m pretty easygoing. What you see is what you get.

Henderson: *You use social media a lot, how does that work for you? Do you find it invasive, or is it fun?*

Cassill: I enjoy it. I think it’s important to enjoy it. For me, I have a lot of fans out there — “almost 20,000 followers”:https://twitter.com/#!/landoncassill/ — and I’m at a point where I can really be personal with them, and I can enjoy being personal with them and getting to know individual people. I don’t envy somebody like Jimmie Johnson who, as much as they’re really good to their fans, they can’t quite enjoy some of things that I can enjoy with my fans. Jimmie can’t take his fans mini-golfing. Too many people would show up. I can take 20 people mini-golfing and it would only be 20 people and we can have fun. Someone like Jimmie, if he went mini-golfing with some fans, a thousand people would show up and it would be more trouble than it would be enjoyable. So hopefully I can continue to enjoy my Facebook fans and hopefully it will help build my fan base, because I really appreciate their support and their Twitter following and all that stuff. The fans out there know a lot, they want to know more, and the only way for them to get to know more is to get to know us more. So I’m definitely open to that and I have no problem with that. I find, actually, that most of the fans I deal with are not intrusive. They’re not too nosy or anything like that, and if they are intruding, you don’t have to engage it. I’ve enjoyed getting to know a lot of the fans. I’ve gotten to know some really good people on Twitter and Facebook and at the racetrack who are genuine people who just love racing.

Henderson: *What’s the craziest thing a fan has asked you online?*

Cassill: I don’t know if there’s anything too crazy. Every once in a while, you just meet some people and they’re definitely nuts. They’re definitely over the top with things, and that makes you go, “OK, maybe that’s not someone I would go mini-golfing with!” But most of the people I’ve met are all pretty good people, they’re pretty down to earth. Those are the people that keep our sport going, so it’s very important to me to treat them well and to be a part of their lives.