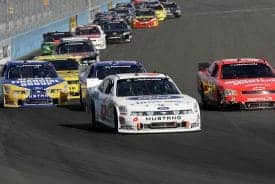 To call the Nationwide Series of 2012 a walking contradiction is putting it lightly. On the one hand, the series is shaping up to have its most wide-open title fight since David Green, Bobby Hamilton Jr., Scott Riggs and eventual champion Brian Vickers duked it out all the way to Homestead in 2003. The series has seen regulars win four of the first five races, with the rides and drivers at the front of the field proving more competitive with their Cup double duty brethren than they have been since 2005, the last season a regular actually won the crown. Not to mention the racing itself has actually been worth watching.

On the other side of the tracks, er, garage, though, life is nowhere near so promising. Sponsorship is still sorely lacking for just about every independent operation on the circuit (and even for the big guns, remember that Trevor Bayne still doesn’t have a ride for Texas). Start-and-parks are still able to make the field on a regular basis. The teams that are racing are doing so on scuffed tires with used engines and limited car stables. For as much as the competitiveness has been flourishing on track, the overall health of the series… and the business model that keeps its teams on track, is no better off than a season ago.

Though frontrunners such as defending champion Ricky Stenhouse Jr. are all over ESPN’s telecasts so far this year, the same can’t be said for just about any NNS regular running 15th on back.

And no matter how good a show, no matter how many races Elliott Sadler, Ricky Stenhouse Jr. and James Buescher win, it’s not going to get better in 2012. And those whose interest in the Nationwide Series goes beyond entertainment to the long-term health of NASCAR’s AAA can focus blame squarely on ESPN, the network responsible for televising it.

It’s a story that’s been documented by many for years. The exclusive network, home for the nation’s second biggest level of motorsports has, on numerous occasions, proven so unprepared to take account of the 43+ cars that attempt every race that they’ve lacked even the most basic of scoring graphics and photos for use in telemetry, scoring and driver introductions (the spring Nashville race of 2009). They’ve turned race telecasts into glorified infomercials for only a driver or two (the Kyle vs. Carl showdown at Phoenix in 2009, Danica’s debut in 2010). And that seemingly standard practice of flat screwing up a race broadcast continued this past weekend, despite Fontana hosting one of the most entertaining races it ever has.

Sure, there was plenty of battling at the front to justify the cameras being trained up front… the Stenhouse/Logano/Keselowski parade up front was not one to miss. But that being said, it was just like any other race on an intermediate, with a middle section that lagged to a degree with drivers logging laps and preserving cars over a long, green-flag run. There was plenty of time to bring the viewers up to speed on the rest of the race from 15th on back, and yet it never came. By the numbers, when all was said and done and 300 miles were in the books, over 50% of the Nationwide Series regulars in the field were not featured; their cars and sponsors not aired on TV, their races undescribed, their successes and mechanical failures unaccounted for.

Which begs an important question… how, exactly, is one that doesn’t have a mega-team with millions of dollars supposed to sell the supposed advertising gold of NASCAR to backers? After all, if the idea was solely to reach crowds in the grandstands, those companies would be better off sponsoring football or baseball games where the crowds routinely are larger than those seen for Nationwide Series races. For all the hospitality, show cars and other potential advertising ploys that stem from NASCAR sponsorship, the big cash cow is still TV time, having one’s 200 mph corporate billboards flying around the track.

See the problem? It could be a misguided pandering to casual fans by focusing solely on the stars of the field, it could be the network’s own sponsorship obligations, it could be laziness. But whatever the reason, even upon last year’s announcement that the Nationwide Series would go to the new points system that made it impossible for Cup regulars to win the championship, ESPN publicly stated their commitment to televising the action at the front as the priority. That’s a major issue… seeing as how that means less than 50% of the field is actually able to sell sponsorship, their lifeblood, on a level playing field.

This conflict is nothing new. What is new, however, broke just this week when it was reported that Blake Koch’s sponsor left both driver and Rick Ware Racing’s No. 41 team because the network refused to air commercials for the Rise Up and Register voting campaign. Stating “the spot did not meet our guidelines with regard to advocacy messaging,” ESPN’s decision not to allow Koch’s sponsor to run advertisements ultimately cost the Nationwide regular his backing, his 2012 schedule now uncertain.

Yes, ESPN has every right to dictate what ads they do and don’t run on their broadcasts. But for crying out loud, it’s a get out and vote campaign. This TV network is the same one that helped make “Tebowing” a national phenomenon. Even more relevant, they broadcasted NASCAR not just for the last few years, but way back decades ago… when the sport was still showing its unpolished, roughneck, and yes, religious, Southern roots. If there’s one network out there that’s fully aware of NASCAR’s core group of fans, who they are, and what they represent, it’s ESPN. They knew full well who the fans they’re broadcasting to were when they returned to the sport. They knew full well that NASCAR has never been one to separate itself from politically-tinged ads; Kirk Shelmerdine ran Bush for President decals all over his Cup car in the second half of 2004, while Kevin Triplett for Congress graced Hover Motorsports’ No. 80 car at Martinsville that same year. Don’t forget, on the religious side that Bobby Labonte’s 2004 Daytona 500 car featured The Passion of the Christ on its hood. Now, granted, ESPN didn’t air any of these instances, but again, this sport is the one they signed on to cover.

And, that doesn’t take into account that ESPN has already aired political ads…and religious ads…on their broadcasts. Kendrick Meek for Congress was draped all over Mike Wallace’s No. 01 car at Daytona two years ago, while Morgan Shepherd’s car has had a crucifix on the hood for years now. Are these TV ads the likes of which the network refused to air? No, they’re not. I will be perfectly honest in that I am not making an “apples to apples” comparison; those roving billboards are not 30-second commercials. That being said, this is a fan base, a sport, and a business model that always has and always will lend itself to the type of advertising that one would expect from Rise Up and Register, or any sponsor with a political or religious message.

To hear of this refusal to air an ad that encourages persons to register to vote is one that screams political correctness, regardless of which side of the political spectrum one falls on. But more so, it reeks of the same inflexibility that the sanctioning body itself showed in 2004, the last time the sport found itself in an ugly economic downturn. Refusing to budge on its asinine restrictions on hard liquor sponsorships, the sport nearly lost Roush Racing’s No. 99 team despite having spirits giant Diageo ready to sign on the dotted line to back Jeff Burton; instead, Burton ended up leaving Roush for RCR while it took the superstardom of Carl Edwards to save the No. 99. On a smaller scale, Derrike Cope and the start-up Arnold Development Companies No. 50 team ran into the same ridiculousness, losing backing from RedNeckJunk.com because NASCAR seemed convinced that such a sponsor would paint the sport in a negative light (ironically, it was barely a month later when Talladega fans littered the track with beer cans after Jeff Gordon held off Dale Jr. for the win). It was one of only a handful of sponsors the team managed to sign through 2004; they disappeared a year later.

Fortunately, NASCAR seemed to learn a lesson, as a year later the sport welcomed Jack Daniel’s, Jim Beam and others into the fold as stock car racing sponsors.

One can only hope ESPN learns the same. Making business decisions in the name of political correctness, the casual fan, and the easier road may make the short-term simpler, but in the case of NASCAR’s Nationwide Series, it’s doing a disservice to many of its competitors.