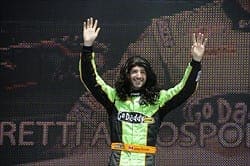 Given all the changes in the off-season, perhaps the best thing I can say about the first weekend of the 2012 IndyCar Series season was that it passed, by and large, without a hitch. Race winner Helio Castroneves’s impromptu salute of Dan Wheldon at the end of the race was a fitting conclusion. Dan will never be forgotten but the show must go on. Race car drivers are a rare breed. They strap themselves into rocket ships and push themselves to the extremes of human capabilities just to get the day job done. I can’t presume to know what Dan would have thought, but I’d like to think he looked down from heaven this past weekend and smiled that million dollar grin of his. So with the first race out of the way, it’s time to concentrate on a spell of three races in the month of April in Birmingham, Long Beach and Sao Paolo, Brazil. First up this weekend, it’s Barber Motorsports Park.

James Hinchcliffe’s big-time season as Danica Patrick’s replacement got off to a strong start at St. Petersburg.

The Barber Motorsports Park is a sprawling 740-acre, multi-purpose permanent racing facility in Birmingham, Alabama. It’s a 17-turn, 2.38 mile long road course and the home for the second year in a row to the second race of the season for the IndyCar Series. In 2010, the inaugural event was the third race of the year. The sample size at Barber Motorsports Park is necessarily small, and made smaller by the fact that this year we have new cars, new engines and a brand new chassis. But for the record, the first race in 2010 was won by Helio Castroneves, while Will Power lead flag-to-flag for a dominant victory in last year’s race.

*What’s the Points (Driver Standings):*
It doesn’t take a math major to work out that the Team Penske veteran and winner of 26 races — Helio Castroneves – sits proudly atop the standings with the rest of the drivers lining up as per their finishing positions in the first race of the year. It is worth noting, however, that Dario Franchitti, had a quiet day, finishing 13th and running out of fuel on the final lap – costing him several positions. One suspects, despite a sluggish start, there’s plenty more left in the tank for the four-time champion.

*Featured Driver: James Hinchcliffe*
2012 is a huge year for the amiable native Canadian and 2011 Rookie of the Year James Hinchcliffe. Tabbed to replace Danica in the Go Daddy Andretti Autosport car, Hinch has a high profile ride and an even higher profile opportunity to mix it with the chief protagonists of the sport. So far, so good, then as Hinch wheeled his No. 27 Chevy to a very respectable fourth place finish – equaling his best ever finish in his 17 top level IndyCar races to date. With a full season under his belt already, expect Hinch to run strongly across the year and challenge for a win or two along the way. And if his first driver introduction of the year is anything to go by (he wore a long Danica style wig) he’ll certainly be fun to watch.

*Any Other News:*
NFL legend and Alabama native Bart Starr will be the Grand Marshal this weekend at Barber Motorsports Park.

*Upcoming:*
After two races in two weeks, the IndyCar Series takes a week off before heading out to the West coast and the iconic temporary course on the Streets of Long Beach, Ca. Then it’s off to Brazil for the Sao Paolo Grand Prix: an event that will have even more eyes than usual with the arrival of popular 19-year Formula One veteran Rubens Barrichello – he of the 1.5 million Twitter followers. After the trip to South America it will be all about one thing: The 96th running of the Greatest Spectacle in Racing – the Indy 500.