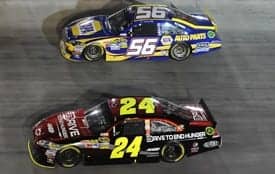 Not exactly a question to start, but here’s a response to a comment on a Frontstretch commentary Doug S. made regarding possible changes to Bristol Motor Speedway.

_Be careful what you wish for. If he changes the track and it still doesn’t sell out, I wouldn’t put it past Bruton Smith to ensure a sellout for Bristol by racing there only one time a year. He’s dying to get a second race at Las Vegas. I’ll bet he’ll get it at the expense of Bristol. And he’ll throw that survey back in the face of fans. “Hey, ya’ll said if I changed the track you’d show and you didn’t so… they come to Vegas, let’s go there twice a year.”_

“What’s this? Drivers not smashing into each other from behind? This won’t do — summon the backhoes!”

That’s a pretty good take on the situation, Doug. Bristol holds 160,000 and Las Vegas 142,000 according to the NASCAR Media Guide. If it didn’t sell completely out twice at Vegas, would he try to move the second race back to Bristol? I’m betting that if the change in configuration works (and Bruton says they have it all on computers to make it just like it was) we’ll see a return to the slam-bam, outta-my-way-ma’am racing we saw there in the past.

Which brings up another slant on this deal: several drivers have already gone on record as saying they aren’t in favor of changing it back to the old configuration.

Gee, what a complete surprise. Now it’s easier to pass for position at Bristol, and they want to keep it that way. This is completely understandable, of course.

But do we want to listen only to the drivers?

Let’s face it, it’s the people who watch the events that pay the freight, as I was taught by the first promoter I worked for, way back when. I know some track operators have stated that ticket sales only cover the sanction fee, and the profit is in sponsorships and television rights.

I’ve got my doubts on that one, but why do sponsors get involved? They’re appealing to the fans to support them and buy their product, whatever it may be. If the fans don’t support those sponsors and buy those products, they’re going to drop out. (Same goes for the TV rights. No sponsors, TV can’t survive and the next thing you know we’re on a pay-per-view basis. Which _still_ means the fans have to support it.)

If sponsors drop out, there goes the multi-million dollar driver salaries along with everything else. We’re back to the 1960s era of funding and support, but with the equipment and travel costs what they are today. And while we’re on the subject, who thought up this Florida-to-Arizona-to-Nevada, back-to-Tennessee, out-to-California, and back-to-Virginia deal?

Any way you slice it, the people watching these races are paying the freight.

Also, driver “suggestions” haven’t always worked out. Remember years ago when Rusty Wallace said Goodyear should make a harder tire to put more of it in the drivers’ hands?

Like you said, Doug, be careful what you wish for…

—
There have been a couple of phone calls this week with comments on the boring race at California last Sunday. I’ll admit it put me to sleep for a few laps.

How these bad races came about, back in the day… “Hey Kyle, I told NASCAR they needed to have Goodyear make the tires really hard to put on a good race. Guess what? They bought it!”

At the same time, I recall a lot of folks noting that the racing for position wasn’t bad because the teams were pretty sure the race was only going to make it to halfway.

This, naturally, led to some suggestions for shorter races.

Although I like this approach, I’ll have to agree with my Frontstretch colleague Bryan Davis Keith, who said the tracks weren’t going to want to pay the same purse or sanction fee for half of the race.

He suggests incentives of some type to promote more passing.

That would take some thought, sure, but what doesn’t? One of the best incentive point programs I’ve seen was the one thought up by Dick Jordan, director of the United States Auto Club’s news department, for the regional midget series they ran at the Indianapolis Speedrome.

I’m not sure of the points per position finished, but if I’m not mistaken, they awarded a point for each car you passed during the feature. Making this even more fun was the fact that they lined up inverted according to points.

On the other hand, some of the most exciting races I’ve flagged, seen, promoted, or watched were with a split format; “Shootout-Style,” if you prefer.

Now, at California, say, you could split the race into a couple of 100-lappers, pay half the purse for each 100, and maybe restructure the points accordingly. Or maybe full points for each 100. Run both of them lined up according to qualifying, or invert the second start by our old system.

Something to think about…