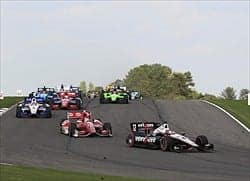 *In A Nutshell:* A red flag during Saturday’s qualifying session negated Will Power’s fast lap and left him ninth on the starting grid. He wasn’t happy with that result, thinking he couldn’t win the race from that far back. But good pit strategy, good tire strategy and patience put Power in front by the end of the day where he drove away for his second consecutive victory at Barber Motorsports Park. Scott Dixon finished second followed by Helio Castroneves, Graham Rahal, and rookie Simon Pagenaud who improved on his series best finish from last week by one position.

Will Power leads the field at the Honda Grand Prix of Alabama at Barber Motorsports Park. Credit to INDYCAR LAT USA.

*Key Moment:* Will Power won this race twice. First, Power pitted just a little early for his final stop and had a fast stop. Race leader Dixon pitted after Power and had a slower one because the wheel nut fell out of the gun. Power flashed by on the track as Dixon was exiting the pits to take control. However, a caution right after the stops set up a final restart with Power and Dixon side-by-side. Dixon nosed ahead just after crossing the line but Power beat him to the first turn and never gave up the lead.

– Team Penske has won all three races run at Barber Motorsports Park. Helio Castroneves won the inaugural event and Will Power has won the last two.

– Congratulations to NBC Sports Network for EXCELLENT coverage of the race. The reporting crew is the same as on Versus last year and Bob Jenkins, Wally Dallenbach and Jon Beekhuis are always good. But what I am very impressed with is the job the network did covering the entire race. Too often when a leader runs away with the show at the front, you are left with the impression that the race was boring but that was most certainly not the case in Alabama. Scott Dixon and later Will Power may have driven off in the lead but there was racing and passing all through the field and NBC Sports Network did a fantastic job of showing it.

– In two races this year, Scott Dixon has been the second-place finisher.

– The pit crews are obviously going to have to do some practicing to get used to the new cars. There were many slow pit stops today and almost all of them were because changers are having difficulty with the rear tires. The new body work surrounding those tires means changers have to be much more precise to get the tires off and on.

– Tire strategy takes on a whole different meaning in IndyCar where teams are given two types of tires to use during the races. It’s easy to tell which one a team is using. Black sidewall tires are harder so they don’t wear as quickly but they are not as fast. Red sidewall tires are softer so they wear out easier but they are generally faster. Teams must use both during the race. Most used their black tires early and just tried to maintain their positions so they would have the faster red tires left for the end, including winner Will Power. For whatever reason, Helio Castroneves seemed to be the exception to the rule. He was faster on the black tires.

– From the slightly bizarre universe or maybe the only in Alabama category, the ferris wheel shown often in scenic shots of the track once belonged to Michael Jackson and was on his Neverland Ranch.

– The teams do not have push to pass right now. With all new engines for this year, the first priority was to get them up to speed and to make sure they could last for a race. Extras will come later, so supposedly the magic button will return at a later time. My question is… does it have to? I have never liked push to pass. It’s contrived in my opinion. We saw absolutely fantastic racing today with drivers using nothing but engines, skill and tire management. Why do they need a magic button to get by the guy in front of them instead of just a faster car and the ability to set up a good pass?

– Lotus had noticeably fewer gremlins this week, with Alex Tagliani the only failure for the engine manufacturer. His car shut down just after the start, apparently some sort of kill switch function gone wrong. On the other end, Sebastien Bourdais drove his Lotus entry to a nice ninth-place result. The manufacturer came into the fray late and has been playing catchup. Unfortunately, things are about to get stickier. Because of the late start, limited parts and therefore limited engines are available. The failures last week wiped out the supply. That means that none of the Lotus teams are going to a test session scheduled for this week at Indy. The trick when you are behind is to get caught up but things like this can just make that impossible. Let’s hope they find a way to make this work.

Chevrolet and Honda are still running neck and neck. The top 10 featured four Chevrolets, including the winner and five Hondas. Lotus had the other spot with Bourdais.

*Notable Driver:* One week. That’s how long it took *Rubens Barrichello* to figure it out. Drivers don’t always make successful transitions from one series to another and with Barrichello, the IndyCar deal came together just a few weeks before the start of the season. He had a challenging day in St. Petersburg last week, finishing 17th. But at Barber Motorsports Park, it was obvious Barrichello was more comfortable. He was mixing it up with the other drivers, making passes, defending his position and, after taking the final restart in 12th, he was rewarded for his efforts with an eighth-place finish.

“I wasn’t even thinking about the end result. I just kept plodding away every stint. Tim Cindric kept putting me in such good positions so we could really use our speed. I can’t believe we won from ninth. I thought that was never possible from this place. Having the Verizon No. 12 car in Victory Lane was not what I was thinking this morning but good job by the team.” _Race winner Will Power_

“We had a quick car. I think we were quicker behind Will. I tried to push but when you’re behind, you lose so much downforce and grip and I ground the rear tires off it towards the end. It’s a tough day. It’s tough to swallow that because I thought we had done a good job.” _Second-place finisher Scott Dixon, who led much of the race_

“I first need to say thank you to the crew and thank you for my first top-10 finish. It’s hard to be happy with a top 10, but starting so far back and at some points in the race even further back, I think it was a positive that I was able to work my way back through the field. By the end of the race, I had one of the fastest-running cars, so I think it was enjoyable to watch and for me to race. People race hard over here, but they were fair. I had many knocks and bumps, but the cars are so robust in this series that we can luckily get away with it. I enjoyed my day and thank my sponsors, BMC and Embrase and my team once again.” _Rubens Barrichello_

“I tell you this car was probably the fastest one out there today. It’s good to see that we can produce such a great job with a one-car team and to fight with the Penskes and Ganassis. I’m very proud to be a part of this team.” _Simon Pagenaud_

“Every time we get in traffic, we get swallowed up like we don’t exist, so I was a little down before the race. Expectations were not super high and it turned out extremely different. I was very happy with my car. Initially, the track was green enough that I could make moves on them, but when the other cars lost their tires, it really helped me put the moves on them. Our car held its tires very well and that put us in that position. We passed a lot of people and it was a pretty exciting day.” _Sebastien Bourdais_

*What’s Next:* The IZOD IndyCar Series takes an Easter break next week and resumes in two weeks with the 38th Annual Toyota Grand Prix of Long Beach on April 15. Television coverage starts at 3:30 PM on NBC Sports Network. The race can also be heard on XM Channel 94 and Sirius 212. Mike Conway was the winner of last year’s event.