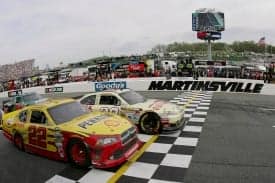 The Key Moment – On the first green-white-checkered restart, Jeff Gordon and Jimmie Johnson led the field to the green, both on worn tires as competitors behind them on fresh ones licked their chops. Clint Bowyer, propelled by a solid shot to his rear bumper from Ryan Newman, took the Hendrick duo three-wide towards the first turn and it didn’t work out too well for any of the three of them. Meanwhile, Newman snaked his way into the lead and, ultimately, the win.

In a Nutshell – There’s nothing wrong with the new NASCAR style of racing that an old short track can’t fix.

Dramatic Moment – Obviously, they’ll be talking about the penultimate restart of Sunday’s race for a long time.

Prior to the melee, Gordon spent 20 laps running down Johnson and he had just completed the pass to take the lead when the sixth caution flag flew.

What was David Reutimann thinking staying out on the track with a broken steering component rather than getting out of the way and letting the race take its course? (In his defense, Reutimann said after the race that his car had cut out on him and died while he was trying to limp to the finish with that broken steering component. “I know it sucks for everyone. But I can’t get out and push the thing,” Reutimann noted.)

It’s funny how Martinsville is the oldest track on the circuit, and the place really hasn’t changed much since it was paved, but nobody is calling for this half-mile to be torn up and changed.

Much of the focus on the big wreck will be on Bowyer’s decision to take the leaders three-wide at Martinsville. But I’m thinking I saw Gordon and Johnson conspire to bring the field to that restart awfully slowly, in the hopes of boxing up their competition and settling the race between themselves on the final lap. It also appeared it was Johnson’s decision to move down the track while aware he was in a three-wide situation that triggered the wreck.

What’s all this hullabaloo about Hendrick waiting to get his 200th Cup win? If you’re realistic and recognize Stewart-Haas Racing as a thinly disguised satellite team to HMS, that 200th win took place sometime last season.

I’d hate to see Newman lose a sponsor but maybe Outback ought to consider sponsoring Phoenix Racing. Out Back is where Kurt Busch has been running all season.

One pass for the lead and one caution flag in the first 250 miles at Martinsville? (In fact, there were only seven cautions all day, the fewest at Martinsville since 1996.) Are today’s drivers more talented and courteous than our heroes of yore, or are they more timid and cautious just trying to score some points towards the Chase rather than racing?

Yes, I write about stock car racing, but longtime readers know about my lifetime predilection for loud, fast cars of any sort. This week the NHRA family lost a legend of the sport with the passing of Bill “Grumpy” Jenkins, a personal hero of mine from way back. The Grump built and raced a series of Chevys in the Super Stock and Pro Stock classes, mainly Camaros but there were a few Novas and Vegas mixed in there as well. The majority of them were raced under the “Grumpy’s Toy” moniker, and successfully at that with plenty of victories on the all-time resume. Jenkins’ shop is right down the road from me and as a kid I loved watching him run at Atco and Maple Grove. I still have a model of his ’69 Camaro I built when I was 10 and about a half-dozen diecast cars of various “Toys.” Godspeed, Mr. Jenkins. Your contributions to drag racing will not be forgotten and you’ll be missed.

Adventures of a Yankee Writer in Dixie: Episode One. Way back, when on one of my first forays south to cover a race, I arrived at the office with a splitting headache courtesy of allergies and clogged sinuses. (And perhaps the dozen or so beers I’d had the previous evening.) Trying to be helpful, one of my compatriots handed me a Goody’s Headache Powder when I’d been expecting an aspirin. So I unwrapped the package, saw that powder and figured I knew what needed doing. I chopped it into two straight lines with a credit card, rolled up a $20 bill and prepared to snort the lines. Fortunately, my co-worker intervened before I did so. I still blush every time someone mentions a Goody’s.

What didn’t happen to Gordon in the waning laps of the race? First, he was the meat in a 48-15 sandwich on the infamous sixth restart, but unlike the No. 48, he kept it off the wall. Then, he ran out of gas waiting for the race to resume. The unofficial results (and they are subject to change) show Gordon finishing 14th despite having led 328 laps.

Johnson seemed to have the race in hand until Gordon got a nose by him moments before the sixth caution flag flew. Before Johnson got a chance to try to retake the lead, he was in the wall.

Kasey Kahne blew an engine at lap 316, his third finish outside the top 30 in six races with Hendrick Motorsports (38th). On a brighter note, he didn’t wreck this week, but it had to be frustrating for Kahne and the No. 5 team to watch their three stablemates running 1-2-3 late in the race.

Kevin Harvick’s No. 29 car sported a paint scheme that mirrored the front page of a newspaper the day Prohibition was repealed. Perhaps that was appropriate in that Harvick was a headliner early in the race but by the midway point the Bud car was already old news. At day’s end, he was 19th.

Kurt Busch melted down not one but two right front tires and spent the rest of the day just trying to stay out of the way en route to a 33rd-place finish.

Kyle Busch’s day went even worse. He broke a track arm and stuffed the No. 18 into the wall in what was arguably the hardest hit in Sunday’s race. After spending 65 laps behind the wall for repairs to be made, Busch finished 36th.

Newman had to overcome a pit road speeding penalty earlier in the race and squirt through a hole about as wide as his car during that final wreck to take the win.

AJ Allmendinger was being treated for the flu on race morning and fell a lap down at one point during the event. He probably felt a lot better than that after finishing second.

Dale Earnhardt Jr.’s car took a hard hit to the right front when Gordon slid into his path, but he drove a clearly damaged car to a third-place finish.

At a track that clearly isn’t a good one for the Roush organization, on a weekend where none of the Roush Fenway cars ever seemed up to speed, a fourth-place finish had to feel like a gift to Matt Kenseth. Carl Edwards (11th) and Greg Biffle (13th) were probably surprised and pleased to leave Martinsville with a minimal amount of damage in the point standings.

Biffle retains his points lead. He is now six points ahead of second-place Earnhardt. Tony Stewart moved up a spot to third in the standings. He is one of four drivers listed as being 12 points out of the lead but gets the nod with two wins already this season. Kenseth is fourth (+2) with one win, followed by Harvick (-3) in fifth and Truex (+1) in sixth.

Keselowski moves up four spots to 12th in the standings. He’d be the final “wild card” entry if the season ended today.

Further back, those two extra points Gordon earned for leading a lap and leading the most laps Sunday helped him some, but not much. He’s up four positions to 21st in the standings. Teammate Kahne is in worse shape, 31st in points and already 133 out of the lead. I’d say the focus now has to be on winning a couple of races to get a “wild card” slot in the playoffs for the No. 5 team. Agenda item number 1: Finish events.

In owner points, which clinch a spot in each race for the top-35 teams, the No. 10 team is now 36th despite Reutimann’s questionable late race shenanigans. The outfit, which is the one Danica Patrick is slated to drive for at Darlington next month is now one point behind the No. 83 BK Racing bunch and Landon Cassill.

Overall Rating (On a scale of one to six beer cans, with one being a stinker and a six-pack an instant classic) — Yeah, OK the first 400 laps dragged on at times but we’ll give this one five icy cold bottles of Corona and a chaser of Gentleman Jack served up by a bartender who looks like Deanna Carter.

Next Up – The Cup series takes a week off to allow Christian fans to celebrate the Resurrection of our Lord Jesus Christ. Racing or some facsimile thereof returns at Texas on Saturday night, April 14th.