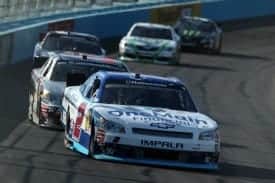 _Gil Martin is the head of the Nationwide Series Program at Richard Childress Racing. He’s tasked with preparing the cars for Elliott Sadler and Austin Dillon on a weekly basis, along with coordinating the race weekend activities for the organization. A former crew chief on the Nationwide and Cup level, Martin has had success with various drivers, making the Chase during his career with Clint Bowyer while making the trip to Victory Lane with Kevin Harvick. After nearly a decade of head wrenching, he’s now moved up to a management role and is relishing the opportunity to cap off RCR’s return to the Nationwide Series with a season championship._

_Frontstretch caught up with Martin at Millbridge Speedway while he was there overseeing the race effort of his son Ford. Martin talks about the strategy for NASCAR teams from a technical perspective heading into the off week, the effect EFI has had on performance and so much more._

Mike Neff: *You have a two-week break since you aren’t racing at Martinsville this weekend and next weekend is Easter. What do you deal with on your off week? Is it a matter of getting caught up with stuff that was already broken during the first few weeks of the season or are you trying to get ahead for the next couple of races?*

Gil Martin: Well, what we’re doing is I feel like we’re operating at about 80% of where I think we should be. We just formed this team in December and just started building in December and started building race cars. To do the things we’ve accomplished so far this season is pretty incredible. Today we were testing in Nashville, all morning from 8:00 this morning until 2:00 this afternoon. Came here [Millbridge] to the dirt track tonight to race go-karts.

The biggest thing we’re trying to do is get caught up, ‘cause we’ve been working a lot of hours. We’ve worked our guys hard. We’ve been working six days, sometimes seven days a week, so we’re hoping to give our guys a little bit of a break because, in this division, now that you’re building the cars, they’re just like Cup cars. There is no difference, the way the tolerances are on the bodies and all. There’s a lot of work that goes into these things. Every little bit counts and I feel like now we’re getting down to where we can start tweaking our cars instead of just disassembling them.

Mike Neff: *Have you guys built all new cars yourselves or did you get a fleet from KHI when they shut down?*

Martin: We got some cars from them. We’ve been selling some of them. We’ve been building our own car, an RCR spec car. That’s what we’ve been racing with and that’s what we’ve won with this year. Some of the cars we got from Kevin last year, we’ve been using those cars to get our fleet built up. We’ve been taking them to the track as backup cars, but I feel like with the resources we have at RCR, we were able to take those cars to another level. With the equipment we have now, it is going to take that to run with Joe Gibbs and Roush and Penske. Those guys are racing miniature Cup teams and that is what you have to be prepared to do. So in order for us to do that, we had to go to that same level.

Mike Neff: *You mentioned you have limited tolerances on your race cars, similar to a Cup car. Is there any geometry or specs that can transfer from the Cup car to the Nationwide car or is it a different animal? Are they still a different wheelbase or are they both 110-inch wheelbases now?*

A lot of the guys that run on Saturday in the past, with the old car and then driving the Cup car on Sunday, there wasn’t a lot that you could transfer, but now I think there is a lot of data that is transferring over. Not all of it, but there is a lot of it that you can do now.

Mike Neff: *Nationwide teams don’t do EFI yet. Assuming that is coming soon, is the ECR group already working on an EFI Nationwide engine or are they going to wait until NASCAR makes the call that you’re definitely switching over?*

Martin: We’re waiting. We’re ready to do that development if we need to, but I think that is going to be a couple of years down the road. That is such a major expense for everyone to go through. With the new car coming in 2013, with all of the associated stuff like new sheet metal, it would be too much of a strain to put on the Nationwide Series to go to EFI right now.

The one thing that is good right now, that a lot of people are not noticing or paying attention to is, along with the EFI, we’re getting a lot of driver telemetry that we’re being able to use in the Cup cars. Some of that stuff, if we could use some of that in the Nationwide cars, it would really help some of these younger drivers with the limited testing. It would help them develop because they could look at their driving technique against some of the Cup drivers and I think it would really bring them along quicker. That is one of the things we’re pushing for, to at least try and get some of the telemetry into the Nationwide Series.

_Richard Childress Racing’s Nationwide program has two wins in five races this season. Elliott Sadler’s No. 2 sits in first and rookie Austin Dillon’s No. 3 is third in the series driver standings. With this being the first year of RCR’s new Nationwide program, the results have been impressive so far. The season is a long and arduous trek, but Martin has the Nationwide teams at RCR clicking on all cylinders and putting on an early press for the championship._