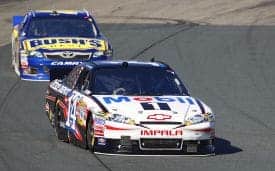 It’s no secret that the financial landscape of NASCAR is quite different than it used to be a decade ago. At that time, the then Winston Cup Series was enjoying record popularity and companies were lining up to become involved in one of the nation’s hottest trends. Nowadays, following the worst economic recession since The Great Depression and with a fan base that is a fraction of what it once was, sponsors aren’t exactly knocking down the doors to spend their money in NASCAR. The result has been that some of the premier teams in the Sprint Cup series such as Roush Fenway Racing and Richard Childress Racing have consolidated teams. In fact, Jack Roush is occasionally forced to run a car out of his own pocket for select events.

But in all reality , we know that Richard Childress and Jack Roush will be just fine. If you look at the race results of last week’s Goody’s Fast Relief 500 at Martinsville, approximately one quarter of the field consisted of small, underfunded teams (counting Tommy Baldwin Racing and Phoenix Racing in this category as well as the No. 33 team, “associated” with RCR). For these teams, losing a sponsor doesn’t mean only running three cars this season instead of four, it could very well mean shutting the doors for good. One man who knows all too well about these challenges is Bob Chasse, president of Genuine Partners, who has served as J.J. Yeley’s business manager for over three years.

Chasse is aware of the struggles of smaller teams in this environment as he has experienced wheeling and dealing with the 25% of the field that does not already have long-term arrangements with some of the top names in the series. He and Yeley have managed to secure rides throughout the majority of the past two and a half seasons and bring in some sponsorship money along the way. Chasse stresses creativity as the key to success for finding marketing partners, especially for the less established teams on the circuit.

“What I think is the key thing to remember in any marketing program is that it’s not what you have, it’s what you do with it.” explained Chasse. “In other words, you don’t necessarily need to run competitively week after week if you can build a solid campaign off the track as well.”

Though Bobby Labonte and the No. 47 team don’t run up front every weekend, the team’s sponsors have been returning for years due to effective retail marketing.

Chasse provided his example of someone who implements this strategy better than most anyone else in the garage and it probably isn’t who most people think of first. “Tad Geschickter (co-owner of the JTG Daugherty Racing Toyota driven by Bobby Labonte) is one of the best in the business as far as marketing goes. While they are a solid team, I’m sure the results aren’t where they want them to be, yet year in and year out, they have the same sponsors. Clorox, Bush Beans, Kimberly-Clark, they all return. The reason, is that he builds a retail program first and then inserts the racing program as part of the overall strategy. They are moving products off the shelves and as a result, they’re not only maintaining sponsors, they are gaining more.”

While JTG Daugherty Racing may not be on the level of Hendrick Motorsports or Joe Gibbs Racing, they still have enough resources to be considered a “mid-level” team. Top 10 runs aren’t out of the question by any means for the No. 47 bunch. The smaller teams with less funding such as Jay Robinson Racing, which Yeley currently drives for, or Tommy Baldwin Racing have to go the extra mile to provide the same return on investment to their sponsors that a Gibbs, Childress or even Geschickter provide for their supporters. For these smaller teams, running in the back, seemingly out of range of the nearest T.V. camera is a harsh reality. Therefore, providing exposure beyond the logo on the car becomes even more vital and these teams have less manpower and resources to accomplish such a feat. Chasse believes that Robinson and Baldwin are two prime examples of teams doing more with less and he believes other organizations will need to follow a similar blueprint if they are going to become a mainstay in the sport.

Of course running near the back all afternoon can actually be considered a good day for some of these teams, as many do not have the luxury of a top 35 owners’ points position, which guarantees them a spot in the race. One can imagine that the possibility of missing an event makes for some uncomfortable conversations with potential sponsors. Yet Chasse does not think it necessarily has to be that way with the right program.

“A perfect example was last year at Dover, we were involved with the Delaware Office of Highway Safety’s ‘Drive Sober, Arrive Alive’ program, when J.J. was driving for Front Row Motorsports and not locked into the field. However, the main focus of the program was centered around a display at the track where J.J. signed autographs, and a program at night where J.J., officials from the Delaware Office of Highway Safety and I rode in a limo to local bars. When we arrived at each establishment, we gave out free T-Shirts and other prizes to those who signed a form agreeing to use a designated driver that night. So it becomes obvious that the logo on the car was just one small facet of a larger program and if we did not make the race, it still would have been successful.” (Note: They did qualify for the race)

“This is why I get frustrated sometimes when I hear about people who want to spend a lot of money on the car without ancillary programs around it” Chasse continued. “You can only do so much with trackside displays, logos on cars or souvenir programs. But all those things put together can make a difference.”

The NASCAR business model has come under great scrutiny and has many fans calling for action from the sanctioning body to implement changes that will help the smaller teams compete instead of start and park or serve as a rolling chicane. Getting rid of the top-35 rule has been one of the more popular, and perhaps easiest suggestion to implement. This rule only ensures that the likes of Jimmie Johnson and Tony Stewart with their multi-million dollar sponsors make the show each week, while the teams owned by Robinson and Joe Nemechek have to explain to potential backers that their brand may not be seen on Sunday, even if their car was quick enough to make the show. Another, less practical suggestion has been to limit the amount of money teams can spend, which quite frankly, could never be properly enforced.

Yet Chasse, whose driver is consistently impacted by the perceived inequality in the sport does not necessarily look to the head honchos to fix the problem. “I think the new car has certainly helped while the EFI requirements have hurt some of the teams. But to tell you the truth, overall, I think the gap has closed somewhat. If you look at qualifying, most of the teams are really close. Granted that is for a lap or two, but it shows progress. The one thing the sport needs to be cautious about is making so many changes to address this problem, that it becomes something different than what the fans want it to be. Again, I think it’s up to those of us involved in the sport, from team owners, to drivers, to track management, to get creative and find new ways to generate interest from a financial perspective.”

The state of the sport certainly did not get to this point overnight and it will not pull out of it quickly either. NASCAR is here to stay for the long run, there is no question about it. It is just a matter of how it emerges from the current state and everyone involved has to play a part in the recovery. Over the past four years, many Americans who survived the recession with their jobs have been asked to do more with less by their management. NASCAR is no different. Those teams who battle just to show up every week have to be especially creative when it comes to generating enough value for sponsors to jump on board.

When the No. 49 Toyota arrives at the track with a logo on the hood, observers can be certain that it is the result of the blood, sweat and tears that Chasse, Yeley and team officials put into the program both on and off the track, to ensure their sponsors will recognize significant R.O.I from their NASCAR endeavor. It is the responsibility of every team on the circuit, especially the smaller ones, to do the same, as the sport’s recovery depends on it.