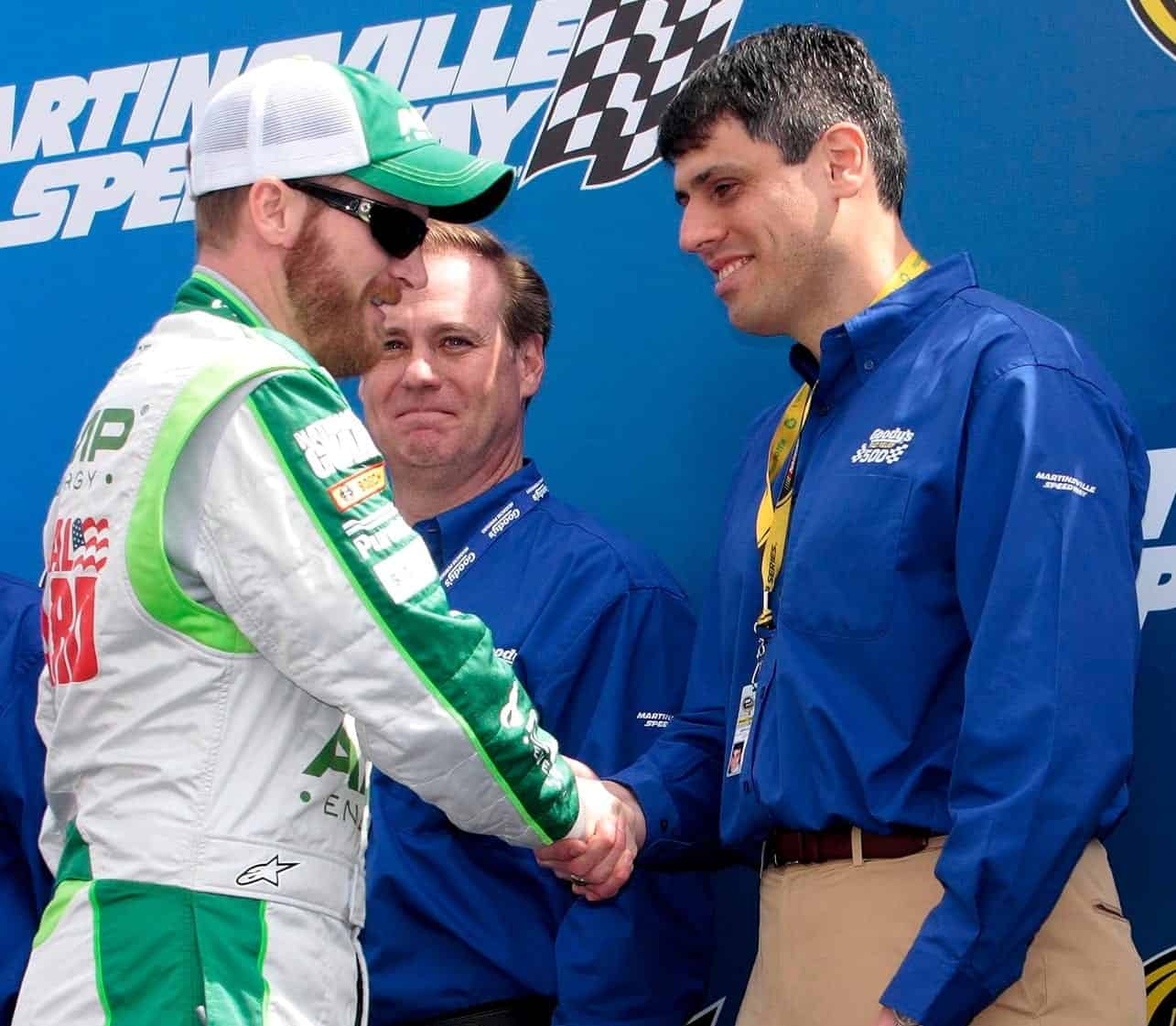 NASCAR drivers are well known for the uncanny ability to rattle off a huge list of companies to thank after winning a race or even after a wreck. Whenever you approach one of these drivers with a camera, microphone or notepad and pen, you can be sure they will remember who got them there and they want everyone to know who it was. After all, it is the sponsors that pay the millions of dollars required to field a competitive race team.

Following his win at the Goody’s Fast Relief 500 at Martinsville Speedway this past Sunday, Ryan Newman was sure to mention his numerous sponsors, “First of all, I’ve got to thank Outback and the U.S. Army, Chevrolet, and Sprint for all they do for this series, and Coca-Cola,” said Newman. “We have some great sponsors this year. Quicken Loans, WIX Filters, Bass Pro Shops, Tornados, Aspen Dental, Haas Automation and obviously the fans, who are a big part of this sport. I need to thank Hendrick (Motorsports) as well, for their support. Their engines are phenomenal, Tony Stewart and everybody at Stewart-Haas Racing. It was an awesome day for the Outback Chevrolet. And everyone can go get a Bloomin’ Onion tomorrow on us.”

As Dale Earnhardt, Jr. knows all too well, good relationships with NASCAR sponsors – like Goody’s Director Joe Juliano (pictured, right) – pay dividends for everyone involved with the sport in the long run. [courtesy of James Price Images]

Outback Steakhouse offers a free Bloomin’ Onion the Monday following a Top 10 finish by Newman, just by mentioning his name when you order.

Fulfilling a media obligation after any race that fell short of victory is rarely something that a driver wants to do. But when the team has a new sponsor to keep their racing dreams alive, you better believe they want to say thank you and inform the world of what this company has to offer. All brand ambassadors could take a lesson from NASCAR.

Not every celebrity’s livelihood hinges on a company putting their product or brand in the hands or reputation of those that endorse them. But who is to say the endorser wouldn’t get more opportunities if they put on a good act for the companies that write the checks? It doesn’t hurt to throw in product placements in your life, à la drinking a bottle of Coke in public if they sponsor you. But the most important thing is your personal behavior, how you show professionalism and how you carry yourself.

Recently Frontstretch.com was provided with the opportunity to interview Country Music star and BC Powder spokesman Trace Adkins, while he was at Martinsville Speedway to present a $50,000 donation by BC Powder to the Wounded Warrior Project. Before Frontstretch.com writers conduct interviews, we do background research on our subjects. In this process, I was surprised to learn that GlaxoSmithKline, BC Powder’s parent company, would sign someone with a DUI on his criminal record to promote their product.

In the mean time, recently reinstated Camping World Truck Series driver John Wes Townley is in search of sponsorship. NASCAR just put Townley on probation for driving under the influence in February.

Everybody does deserve a second chance to prove they can be upstanding citizens that show good character. Adkins took the first step towards this when he went through alcohol rehabilitation in 2001. And by reading the recent @TraceAdkins tweets, you will see his mention of having his drinking days behind him. But it still doesn’t take long to notice that Adkins still doesn’t have the acumen of a professional spokesperson.

For example, in the days preceding last Sunday’s Goody’s Fast Relief 500 at Martinsville Speedway up until the time of this publication, Adkins has tweeted about things such as Turkeys having sex, wanting to stay home (instead of promoting BC Powder), getting an erection from Martinsville hot dogs, the mile high club, the possibility of Twitter causing himself to “still” be in prison and nose picking.

In this day and age, most major corporations tend to take a long look at the comments and actions of their pitchmen. They want to know for sure that you won’t do anything to shame the company or put them in a bad light. NASCAR and team owners analyze everything their drivers say to reporters or type themselves in cyberspace. And drivers work very hard to walk the company line, while still showing personality to the fans. But when a NASCAR driver of a prominent race team acts unprofessionally, it is all too common for the driver to be fined, fired or left searching for a job when their contract expires. A prime example is Kurt Busch, who was let go by Penske Racing last year and is currently having his every action scrutinized, while rebuilding his reputation at Phoenix Racing.

It is not unusual for someone in the music industry to shun these corporate edicts and behavioral expectations. As a matter of fact, it is quite common. But when pitching something such as GlaxoSmithKline’s Goody’s and BC Pick A Powder Campaign, alongside Goody’s Powder and Richard Petty, you would think the endorser of BC Powder would show some interest in the company that is paying him and the charity they are supporting at the event.

When Adkins was asked by Frontstretch.com to talk a little about what BC Powder and Goody’s have going on at Martinsville, Adkins was at a loss. He could only say that he doesn’t know anything other than he would be taken from his motorcoach and walked around a little. Not a single mention of what BC Powder was promoting or the $50,000 check he was there to present to a wounded warrior.

When asked about his connection with the Wounded Warrior Project, Adkins could not recall how he got involved with the charity. He only knew that it had been about two or three years that he has been associated with them.

Had someone in NASCAR answered questions with such disinterest, he would soon be out of a ride. You don’t have to get caught in an epic Tiger Woods sex scandal to lose endorsement opportunities. Something as innocent as religious overtones on your website (i.e. www.blakekoch.com) can cause you to have a sponsorless race car. You have to be extremely careful of what you do or say to be financially backed in this business.

Richard Petty, as he did at Martinsville is seemingly always available to make an appearance for either a sponsor or his legions of adoring fans. [courtesy of James Price Images]

Adkins did tell Frontstretch.com that he expects his new single to drop in mid-May.

The night prior to the Sprint Cup event, “Adkins tweeted that he would rather be home.”:https://twitter.com/#!/TraceAdkins/statuses/186195456215355392 He is very active on Twitter; however, Adkins’ recent twitter feed has no mention of BC Powder, the product that he is a spokesman for.

This is not how someone should promote a company and their $50K donation to charity. A NASCAR driver may go on a rant on social networks here and there, but you can rest assure that the companies paying the bills will get a shout-out sooner or later.

To be fair, Adkins is not the only personality to neglect mentioning the charity that he was to work with at Martinsville. Actor/musician Gary Sinise was supposed to be the Grand Marshal at the Sprint Cup race and support the Stephen Siller Tunnel to Towers Foundation. The Gary Sinise Foundation was on the No. 17 Matt Kenseth Ford Fusion’s paint scheme with Tunnel to Towers, however in the two days prior to the weekend’s races, @garysinise only tweeted about his Martinsville concert. No mention of NASCAR or Tunnel to Towers.

Sinise was unfortunately unable to make it to Martinsville, due to an automobile accident. Goody’s lifetime spokesman Richard Petty filled in on short notice as the Grand Marshal for Sunday’s race. @RPMotorsports “was sure to mention Goody’s prior to the race.”:https://twitter.com/#!/RPMotorsports/status/186454302481584128/photo/1

Every driver of the last 40 years learned how to communicate with the media and how to carry themselves with corporate sponsors and represent their product by watching and emulating Richard Petty. If only some of the newer breed and attendees of our sport would follow his example, everybody would benefit.