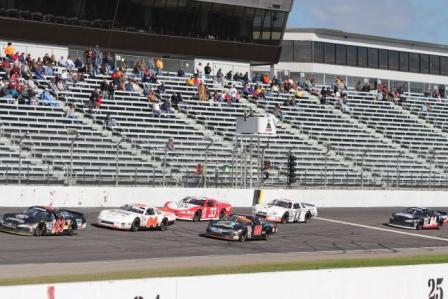 The return of NASCAR racing to Rockingham this weekend is a joyous event, but a complicated one as well. The on-track product is going to well worth watching, and for the fans in the stand, seeing the Truck Series take to the worn asphalt and high banks of southern North Carolina a stone’s throw from the sport’s heart in Charlotte is going to be a welcome sight.

On the other hand, it’s a standalone Truck race, over a thousand miles away from Fort Worth, Texas, and the Cup Series. Like it or not, stock car racing’s focus is not going to be at home this weekend, but in the southwest. And though Sunday’s upcoming 200-miler is nothing short of a triumph for jack-of-all-trades owner Andy Hillenburg, there’s arguably a hollowness to this victory; the new centerpiece of Rockingham’s schedule is NASCAR’s AA.

That being said, there’s no reason this Sunday should be seen as a shortcoming, or for that matter, a continuation. Sunday is a rebirth, and this is not a bad thing.

Anyone that’s a fan of live concert videos has at least heard of U2’s Live at Red Rocks. A powerful performance played in front of a small, rain-soaked crowd, it was perhaps the pinnacle performance for the U2 of old. Far removed from the cosmopolitans that the band has become, this concert flick saw a raw, exuberant, even angry band put on a rock show with an edge that has never been duplicated in three decades of touring.

There’s been plenty of fans that have called for the band, now one of the largest the world has ever known, to return to Red Rocks, to try and duplicate the magic of their famous 1983 event. A U2 tribute band even went as far as to replay the concert themselves, drawing thousands of spectators.

But U2 has steadfastly said no, refusing to return to Red Rocks. Their rationale is simple; they could return, they could play before a sold out crowd in the same confines that they broke out to the world in nearly 30 years ago. But no matter how well they played, no matter how enthusiastic the crowd, no matter the allusion to the past, the band knows full well they’ll never duplicate Live at Red Rocks 1983.

It will never be the Cup Series, but fans looking for good racing instead of recreating the past have something to look forward to this Sunday.

It’s important to bear this is mind when heading into the stands Sunday or tuning into SPEED to see the first NASCAR touring race at the Rock since 2004. There has been plenty of ink spent remembering all the Cup races that Rockingham played host to, down to Kasey Kahne’s near victory in the final Cup race that the venue hosted. But those days have come and gone. The track’s seating capacity has been cut in half. The North Carolina Speedway is now the Rockingham Speedway (though if one looks carefully enough they can still see the North Carolina Speedway lettering outlines on the press box structure). And perhaps most significantly, there’s now two “rocks” outside the track.

It was perhaps the most important move made by Hillenburg upon purchasing the nearly-extinct race track; to create a new statue to commemorate the new winners at the new Rockingham. Alongside the famous Rock that carries the names Earnhardt, Benson and Park, there’s one that says Logano, Caisse and Dillon. For it demonstrates the mentality that race fans must also bring to the facility he’s worked so hard to reinvigorate, to accept the facility for its merits and history, but accept the fact that the days that initially made it famous have come and gone.

Those expecting to see the Trucks take to the track on Sunday and suddenly fix the wrong that was NASCAR leaving one of its true home venues, to suddenly heal the wounds that have for decades festered amongst the hardcore stock car fan are going to leave sorely disappointed, no matter what happens on track. So instead, take a good hard look at just what the Good Sam 200 will bring, no matter what happens on track.

Reduced seating capacity on the backstretch may cut down on the reported attendance, but it also means a more intimate setting. As a lifetime DC sports fan, I will never forget my dad taking me to sold-out Redskins games at RFK Stadium. But the reduced crowd size and the fact that it’s a different sport altogether has not stopped me from thoroughly enjoying the experience of being a DC United season ticket holder, watching soccer with the thousands of rowdy fans that make up the Barra Brava. The fan section may only be a third of the sell-outs that the Skins used to draw, but the intensity and experience is still there nonetheless. There truly is something to be said about less is more when it comes to crowd size, regardless of the venue.

There’s also more freedom for fans and promoters alike when freed from the constriction of the big-time Cup circuit. Here’s one example; try getting away with letting any fan with a grandstand ticket enter the garage area for the drivers’ meeting at a Cup race.

And, of course, there’s what made Rockingham great all along…what happens on track.

I’ve been fortunate enough to see three races since Hillenburg brought racing back to Rockingham. In those three events, I’ve seen Ken Schrader take a dominant Joey Logano to school on the high-sides of the high banks in 2008, Sean Caisse score the most improbable fuel mileage victory I’ve seen in 2009, and a furious ARCA championship fight between Patrick Sheltra and Craig Goess unfold over a lengthy green flag run to end the 2010 season. The racing on the gritty southern asphalt is damn good. Add that to Truck racing, and there’s something truly special in the works for this weekend. Even if it’s no longer the pinnacle of stock car racing, Sunday, April 15, is going to be a great day for race fans.

Let the past be part of it. Here’s to the memories, here’s to the significant role this track played in NASCAR’s history. But don’t let that be the story. Let it be an appetizer, a montage to kick off a new future.

And embrace the new future for what it is.

Bring on the Rock.