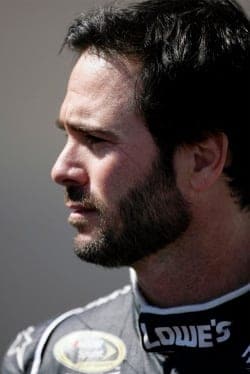 Jimmie Johnson is, in a word, frustrated.

He still might. No one is suggesting he’s lost a step, or doesn’t have it anymore.

They always say second is just the first loser, a sentiment Jimmie Johnson agrees with after expressing disappointment with his second-place finish at Texas.

“Second sucks,” he said, moments after finishing there Saturday night at Texas Motor Speedway. “I wish we could have won. We were in contention, had a great race car. Pit stops were just amazing all night long. Car was great.”

“You know, at the end the No. 16 [Biffle], really probably the last two or three runs the 16 and I were pretty equal,” he said. “Ran pretty similar lap times, and right before the last pit stop I got caught in some traffic, he got to me and came out of the pits and I was pacing him and had a second-and-a-half lead and then we caught traffic.”

Here, some frustration creeps in. You’d never know it to look at him, but Johnson was plenty ticked off. Why?

“Some guys were multiple laps down that didn’t show much respect to myself, the leader,” he explained. “And before I know it, [the] No. 16 was there on the side of me and got by.”

That simple statement speaks volumes. It says that a couple of drivers, notably Martinsville winner Ryan Newman, were not giving him room to race for the victory. And that led to the eventual slide into the concrete that sealed his fate.

“We ran with him [Biffle] for the next eight or 10 laps,” Johnson continued. “And then I made a mistake into Turn 3 and hit the fence. At that point I just needed to make sure I brought it home.”

The politically correct part of Johnson’s mind authored that statement. The racer part of him, however, was raging. You might not know it to look at him, but Johnson is a fierce competitor, and those who know him are aware when that guy is on the mike, not the mellow, laid-back California dude we see most of the time.

“My issue was with the 39 [Newman], when I got inside of him,” Johnson said, matter-of-factly. “He was already a lap down and proceeded to race me and cost me the lead.”

Newman has a reputation of never surrendering an inch of ground, no matter the cause, so it couldn’t have been much of a surprise that he would race Johnson hard. The No. 48 driver, after all, was still second in the race, even with a busted-up race car.

“I was just asking for them to get off me and leave me be on the race track,” Johnson said.

Asked if Saturday night’s mess was more frustrating than the last-restart shenanigans that cost him a shot at the victory at Martinsville, the Hendrick superstar answered at once.

“Martinsville, because we’re much closer to the end,” he said. “But they’re both frustrating. The racer in me wants to win. We’ve been really close over the last five or six months. You look through last year even through different points, [we’ve been] leading a lot of races and didn’t execute at the end for whatever reason. It’s nice to be running well. It’s nice to be in this position. But I want to get back to our winning ways really soon.”

That’s it in a nutshell. Johnson is used to winning races and he isn’t. He’s used to running up front, having the hot rod he needs to dominate, and he doesn’t, not consistently. He’s been in the hunt the last two events, but it hasn’t worked out.

The strategic advantage, if that’s what you want to call it, that Johnson and crew chief Chad Knaus have had recently seems to be gone. It’s not equipment, because Stewart-Haas Racing had won eight of the last 16 races before Texas with Hendrick chassis and engines.

It’s not lack of skill. Five Tiffany trophies attest to that, all in sequential order. It’s not preparation; Knaus is a fanatic about that, and so is Johnson.

It could be luck, the phases of the moon, a curse, global warming… anything. Whatever it is, it’s making Johnson uncharacteristically mortal where he was immortal, racing-wise, before.

And of course, there’s the Sword of Damocles hanging over his head… the mystical 200th victory for Hendrick Motorsports. Johnson said he doesn’t sweat that one. It will come, he says, and in its own time.

“To be honest, [the 200th] hasn’t played much on my mind because I just want to win and I know winning is what my job is about, winning is what Hendrick Motorsports is about, and if we win we’ll take care of the 200th,” he said. “I seem to think about the 200th after the fact and think, ‘man, Martinsville could have been an amazing 1-2-3,’ this weekend, previous weekends. I think about it more after the fact, not leading up to or during the event.”

The fact that he’s heading to Kansas next weekend, where he last won in October for No. 199, is likewise not heavy on his mind. It’s winning that is.

“Whenever it happens is going to be very special for the company,” he said. “Again, I just want to win. I don’t care where it is, whatever reason. There’s 36, 38 of these things a year, and I want to take home a bunch of trophies.

“Second is nice, but winning is everything.”

Johnson hasn’t been doing that, at least not at the clip he’s used to, and it rankles. Teammate and mentor Jeff Gordon went through a similar stretch in his career, too. Fixing it comes down to putting it all together one day at whatever track they happen to be racing that week, then sprinkling in a bit of racing luck for good measure. It doesn’t matter where it happens; Johnson just needs the “when” to be sooner rather than later.

“It’s nice to go to tracks that you know you’re going to run well at,” he said, remaining optimistic about Kansas. “You go down there with high hopes. But unfortunately, it doesn’t guarantee much.”

Until he wins again, Johnson will remain frustrated. That’s just the way he rolls.