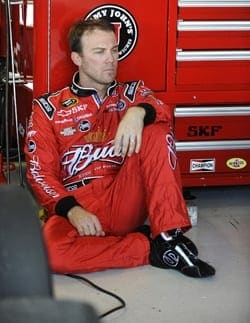 _Did you see all of the race action this weekend? Or, like lots of busy fans, did you miss a late-night adventure, a Friday controversy, or a juicy piece of news? If you did, you’ve come to the right place! Each week, The Frontstretch will break down the racing, series by series, to bring you the biggest stories that you need to watch during the week ahead. Let our experts help you get up to speed for the coming week no matter what competition you might have missed, all in this week’s edition of Pace Laps!_

That leaves us with goose eggs that we’re not used to seeing inside the win column this April. Hendrick Motorsports remains without a victory since Johnson won at Kansas last Fall, while Jeff Gordon and Kasey Kahne hover well outside the top 10 in points. The entire Richard Childress Racing organization has been winless since Richmond last September, finally selling off their fourth team to Joe Falk after a fruitless search for sponsor dollars to keep it afloat. Harvick’s the only one of the remaining trio looking like a true Chase contender. Meanwhile, Kyle Busch has showed maturity, if nothing more which is impressive considering the adversity he’s faced: just one top-5 result in 13 combined races of Nationwide and Cup. And Edwards, stepping out of the sport’s second-tier division completely must now face an awkward reality at the top; 11th in points, a distant third in the RFR camp and 40 races deep into a winless streak that mars a runner-up, 2011 championship performance.

Is Kevin Harvick RCR’s only Chase hope in 2012? If things don’t change, he could be.

Notice we’re this far down before mentioning the biggest monkey of all: Dale Earnhardt, Jr.’s 136-ton gorilla, after 136 races outside of the Winner’s Circle. But at least we’re used to his absence by now; we can’t say the same for these others. What will the consequences be? More than you think. With supposed “lower-tier” Chase candidates like Ryan Newman, Greg Biffle, and Denny Hamlin well on their way to securing a spot, the chances of one their winless “superstar” compatriots missing the postseason field grows higher with every passing week. _–Tom Bowles_

*IZOD IndyCar Series: Rookie Pagenaud On The Rise* Simon Pagenaud, the rookie driver for the one-car Schmidt-Hamilton HP Motorsports team, continues to impress. Pagenaud led 26 laps of the Toyota Grand Prix of Long Beach, surrendering the lead on lap 70 of 85 to make a final pit stop for fuel, his third stop of the race. Will Power, who stopped only twice, took over the top spot while Pagenaud came out fourth and seemingly out of contention for the win with two cars and a lot of distance between himself and Power. But he systematically picked off Rubens Barrichello and Takuma Sato and set sail for Power, running laps 1.5 – 2 seconds faster than the leader who was trying to conserve fuel and closed the gap. In fact, he gained five seconds in five laps after the restart.

Oh, if only the overall length of the race could have been extended by just one more lap. Pagenaud got to within two car lengths of Power, but couldn’t get by him, finishing just 0.8675 seconds back. The second-place finish was still the best for team owner Sam Schmidt since a third by Jaques Lazier at Nashville in 2001, good enough to move Pagenaud up two spots in the series standings to third after three races.

So far this year, that gives Pagenaud sixth, fifth and second-place results, in that order to jumpstart his IndyCar career. Impressive, considering Pagenaud is a rookie and his single-car team does not have the resources or the data of Power, Team Penske, or Chip Ganassi and his operation. By the way he’s performed, though, you’d never know it on the race track. At this rate, the freshman should win one soon although I’m not sure Indy will be that place. Pagenaud passed his rookie oval test at Texas two weeks ago, but those were the first laps he has ever turned on an oval. Still… it’s coming. _–Toni Montgomery_

*Formula 1: That First-Time Feeling* After yet another fabulous race from China in the early hours of this morning, F1 gained its third different winning driver and third different winning car of the season. It was smiles (unusually) all ’round as well as the popular Nico Rosberg (son of 1982 champion Keke) gained his first win in F1. It was an emotional day for the German manufacturer Mercedes as well, as they picked up their first win since the 1955 Italian Grand Prix.

With just a week now until the Bahrain Grand Prix, the teams pack up and head over to the troubled Kingdom still not 100% sure the race will go ahead (see “my Friday column”:https://frontstretch.com/ahollis/38310/ for more detail on the tense political situation there). With the season as open as any in a long time, it’ll be fascinating to see if the Mercedes team can build on this success to push for a real challenge for the title. Let’s also keep an eye on Rosberg’s teammate, Michael Schumacher, who is looking to become the third oldest driver to ever win an F1 race. Who’s to say next Sunday in Bahrain won’t be the day that happens? _-Andy Hollis_

*NASCAR Nationwide Series: Roush Fenway Picks Up Steam* Though Paul Menard led a race-high 100 laps en route to finishing second on Friday for Richard Childress Racing at Texas, this one was Ricky Stenhouse, Jr.’s race from the drop of the green flag. Making the pass from third to take the lead on the very first circuit, the No. 6 car was truly the class of the field, even if Roush’s effort was a single-car operation for the first time in years.

The lesson learned here? Even without a full-time Carl Edwards and Trevor Bayne to lean on for feedback (that’s been the modus operandi for the No. 6 even before this weekend, with sponsorship troubles well known since Daytona) Roush Fenway Racing is showing every bit of the muscle they have always had on intermediate ovals, and the same strength that carried Stenhouse to the Nationwide Series title a season ago. To be the dominant car on a tough weekend for the Roush NNS operation, and to emerge victorious on a night that saw RCR’s Menard and Sadler combine to win the pole and lead 104 laps while Austin Dillon added a top-5 finish… well, let’s call that one a statement.

Six races in, the points battle is now all but dead even; the only difference is all of the momentum now lies with Stenhouse. With two intermediates and an Iowa track he’s won two straight events at among the next five races on the slate, rival Sadler and the No. 2 team are going to have shake off a disappointing 12th-place finish fast. After all, playing catch-up in points, as they tried to for all of 2011 is not something they’ve proven adept at. _–Bryan Davis Keith_

Racer-turned-Rockingham track owner Andy Hillenburg realized his dream on Sunday when NASCAR finally returned to the speedway after an eight-year absence.

*NASCAR Camping World Truck Series: A Debt of Gratitude* When all is said and done with the 2012 season, the significance of the Good Sam 200 in the points race will likely go down as little more than the event that weeded out the pretenders. John King has been a great story through the first two races of the season, but he’s not going to be challenging for this championship. Plus, with Kasey Kahne winning the race from the rear in convincing fashion, there wasn’t a dominant force in the title hunt that emerged from the pack.

That said, there were bigger things afoot this Sunday. Andy Hillenburg’s dream came to life with the drop of the green flag, as race fans well over 20,000 strong were there in person to celebrate NASCAR’s return to a venue they had no business ever leaving. For the first time since 2004, the premier sanctioning body for stock car racing was back on the gritty asphalt of North Carolina that the sport was built on. And everyone, from the fans to the competitors to the local mayor, was singing Hillenburg’s praises.

When Hillenburg was introduced at the drivers’ meeting, the hundreds of fans in the garage watching burst out in a vocal showing of support for the track owner. When he finished making his postrace remarks in the media center, the assembled corps of writers and reporters alike applauded the longtime racer. And leave it to the mayor of Rockingham to sum it up best by saying, “we knew we had the right man to buy this speedway.”

It wasn’t the best race the Rock has seen by any stretch. It wasn’t the biggest crowd the Rock has seen by any stretch. But racing returned to Rockingham, North Carolina on Sunday, thanks to the efforts of a journeyman racer. Andy Hillenburg, this sport and all its fans owe you a debt of gratitude. On behalf of this writer and the site staff at Frontstretch, thank you. _–Bryan Davis Keith_

*Short Tracks: LaJoie Rocks the Rock* Cory LaJoie made it “3 for Dale” at Rockingham on Saturday when he took the win in the UARA-STARS 75-lap race at the historic 1.017-mile oval. LaJoie took the lead at the drop of the green for the green-white-checker finish and held on for the final two laps to score the win. It was the third consecutive victory for the 20-year-old son of former Busch Series champion Randy LaJoie in races he has entered at Rockingham.

In similar fashion to his previous wins at the Rock, LaJoie took full advantage of the adage “To finish first, first you must first finish.” Clay Rogers spun from the lead with fewer than five laps to go when victory was within sight. Travis Swaim assumed the lead at that point, but was having clutch issues and could not get up to speed quickly on restarts. When the rag went in the air for the final start, LaJoie waited until Swaim crossed the start/finish line and then shot to the lead before the field entered turn one. By the time the leaders were out of turn two, he had a comfortable seven car-length advantage, then held off UARA points leader Ronnie Bassett, Jr. for the win.

LaJoie will continue his well-diversified racing over the next two weeks as he competes in the Whelen Southern Modified Tour race at Caraway Speedway on April 21st and then participates in the K&N East Series event at Richmond International Raceway on April 26th. It’s a rising star in the making you should keep an eye on as the short track season continues to unfold; he may be “diversifying” into a top-tier NASCAR opportunity before long. _-Mike Neff_