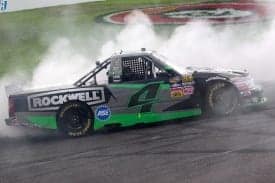 Kasey Kahne pulled the burnout at the end of Sunday’s race at The Rock, cruising to the checkered flag to score a victory he missed out on in Cup – he was second at the track back in 2004, losing by inches to Matt Kenseth.

*Who Should Have Won: Nelson Piquet, Jr.* If not for a late-race penalty for exiting pit road too quickly, Piquet, Jr. likely would have had a great shot to pick up his first win at Rockingham in the same week he won his first career pole. Piquet, Jr. had locked up the second-place spot at the first scoring line along the end of pit road, but was penalized after crossing the second scoring line above the pit road speed. Following the penalty, Piquet, Jr. restarted the race out of contention for the win, but still rocketed up through the field quickly enough to secure a top-10 finish (seventh). During the final 20-lap stretch, Piquet ran the fastest speeds on the track and could have given eventual winner Kasey Kahne a battle for the win.

*Question You Should Be Asking After the Race*

*Did fans do enough to ensure more NASCAR action at The Rock?*

The Good Sam Roadside Assistance 200 marked the first NASCAR race at Rockingham Speedway for eight years, and aside from Piquet’s penalty robbing fans of a close finish, the race could not have gone any better. The grandstands were filled for the first ever Camping World Truck Series race at the track, something Rockingham Speedway President Andy Hillenburg predicted earlier in the weekend. “Two weeks ago, I would’ve told you that there was no chance we could sell out the Rockingham Speedway for NASCAR’s return.” Hillenburg said Saturday. “I do expect a crowd of 25,000-plus; we hold 31,000. We are definitely going to rock the house whether it be 25, 26 or 31 [thousand].” Fans were treated with a comfortable 78-degree day in southern North Carolina, and a solid race. All signs point to Rockingham becoming a staple in the Camping World Truck Series annual schedule, with possible expansion to hosting a Nationwide Series race not out of the question. NASCAR on Fox commentator Darrell Waltrip tweeted “mighty fine crowd at the ‘Rock’ today, makes me very happy for everyone involved in making the race happen,” just as the green flag flew for the first time.

Jeb Burton was one of a handful of rookies who impressed at Rockingham, sticking on the lead lap and coming home with an 11th-place finish.

*Rookie Notes:*
Freshman Paulie Harraka started on the outside of the front row after the best qualifying effort of his young career, but Harraka slipped back in the field during the opening green-flag stretch, with the car too loose to drive around the ultra-slick track. Harraka was lapped by then-leader Nelson Piquet, Jr. and never managed to get back on the lead lap, eventually finishing 26th. On his Twitter account, Harraka summed up the race as a “big loose day.”

John King had shored up his spot atop the standings coming into Rockingham with a ninth-place finish at Martinsville, but King was knocked out of contention early on in North Carolina this week. On lap four, King got loose exiting Turn 2 and was unable to keep his truck from spinning; the rookie smashed into the inside wall, inflicting heavy damage on the nose. King retired to the garage for repairs, then returned later in the race to nurse his truck to a 33rd-place finish. With the disappointing result, the freshman dropped to eighth in the point standings, 28 behind new leader and Red Horse Racing teammate Timothy Peters.

Ty Dillon used the caution with 26 laps to go to his advantage, making a final adjustment and charging up to eighth for his second consecutive top-10 finish. Dillon hung around the top 10 all day long and managed not to fall victim as a lapped car. The freshman’s finish vaults him up to third in the overall point standings, making him the No. 1 rookie in the series through three races.

SPEED Channel commentator Phil Parsons noted pre-race that Rockingham would prove to be a stern test for inexperienced drivers, and the tricky mile proved difficult for many rookies to tame. Piquet, Jr.’s blistering pace in the opening stretch, combined with the lack of caution flags, meant that most of the cars in the race went a lap down in the opening 100 circuits. Among the rookies, only Dillon and Jeb Burton (11th) managed to finish on the lead lap. Dakoda Armstrong (14th) ended the race as the only car just one lap down, while Cale Gale (17th), Max Gresham (18th), Jon Wes Townley (20th) and Caleb Holman (21st) all finished the race three laps off the pace.

“Being a rookie at Rockingham, it took us a little time to get caught up where we needed to be. That put us behind in getting our setup right. We had a decent qualifying lap, then at the start of the race I got loose off turn 2 and hit the inside wall. I hate it for Red Horse Racing, Consol Energy, Davis Love Foundation and Toyota. Everyone worked real hard to get us back out on the track, but it wasn’t the finish we were looking for.” _-John King, finished 33rd_

*Points Shuffle:* Timothy Peters trailed King by just one point prior to the Good Sam Roadside Assistance 200, but his fifth-place result gives the veteran a six-point advantage over second place Justin Lofton. Ty Dillon moved up one spot to third, while James Buescher and Parker Kligerman round out the top 5.

Nelson Piquet, Jr. gained two spots in the standings and now sits in sixth, but he will rue his missed opportunity at Rockingham. Jason White slid down two spots after his 24th-place finish, but the biggest freefall within the top 20 belongs to King, who dropped seven places. Ron Hornaday held his ground in ninth, while David Starr snuck into the top 10 with a 13th-place finish at Rockingham.

*Quotable*
“I knew I would have a good truck, all of the guys at Turner Motorsports put a good couple good days in. I knew the truck was fast. The truck was loose, really loose, but the guys made the change and this was a big win for Turner Motorsports and it’s great to be back here at the Rock – winning.” _Kasey Kahne, finished first_

“The run started off good, but we qualified terrible. We qualified 16th, but we raced into the top 10 in like 25 laps. We didn’t go enough on adjustments on a run and went backwards but [Mike] Shelton and the guys did a great job on the last pit stop to put us next to Kasey there on the last run. It was a good 1-2 finish for Turner Motorsports and we’ll go to Kansas.” _James Buescher, finished second_

“It turned out to be eerily similar, especially in first half of the race. We ran top three, top five. Had a great RAM, especially in that third run where we ended up being four-tenths faster than the leader at the end of the run. For 20 laps, we were faster than any other truck on the track. I just kind of took the experience of saving the right-rear into that run and sure enough, it paid off.” _Parker Kligerman, finished ninth_

*Up Next:* The Camping World Truck Series now heads to the Midwest, running its first 1.5-mile oval of the season at Kansas Speedway in Kansas City, Kansas. The SFP 250 will be broadcast live on SPEED Channel on April 21st at 1:30 EST.